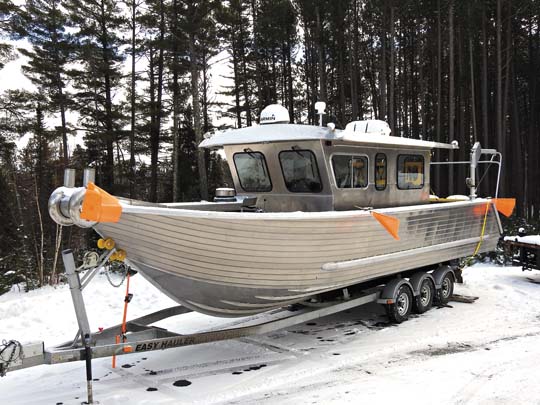 “This was a long process,” said NRD biologist Gene Mensch. “We started this vessel from scratch.”

The boat was made by Henley Boats in Ontario with a funding award from the Bureau of Indian Affairs directed toward lake co-management. Henley Boats uses a roll form lapstrake method to create a tougher aluminum hull with a unique look. The NRD chose them after investigating boats used by other tribes and agencies.

Mensch described the boat to a group of community members, boaters and fishermen at a planned boater safety event on Wednesday. The U.S. Coast Guard representatives were unable to make the trip from Duluth, Minnesota, because of poor road conditions, so the focus turned to the Myrtle Tolonen, named for the first chairwoman of the Keweenaw Bay Indian Community.

“We took painstaking measures to make this vessel as lake-capable as possible,” Mensch said.

Besides lapstrake sides, the boat also has a heated cabin. Mensch said that while it will be nice for the crew, it is necessary for some of the work they do with live fish and fish eggs, too. The Myrtle is equipped with an emergency self-inflating raft and the crew has Mustang Survival anti-exposure suits to keep them warm, even if they fall in the lake. The boat loads fishing nets from the bow with the help of a hydraulic net lifter, and has a 14-foot wide deck.

“This is an incredibly stable vessel,” Mensch said. “This is our workhorse.”

Before the winter weather arrived, Mensch and other NRD employees used the Myrtle to collect some lake trout eggs for the tribal fisheries, nine miles off shore. Mensch said that with the NRD’s other boats they could have only done that kind of work on the calmest of days, but the Myrtle can handle much rougher water.

Under the processing table in the bow of the Myrtle is a large tank for keeping live fish in.

“We could put an adult sturgeon in there and keep it alive,” Mensch said.

The NRD might decide to bring the Myrtle to a local fabricator to change some things in the bow’s layout that did not make it into Henley Boats’ blueprint, but Mensch said they would try things out as they are for now.

Mensch also recommended that boaters, especially fishermen who are sometimes on the lake in poor weather, get an Emergency Position Indicating Radio Beacon (EPIRB). An EPIRB gets registered with the U.S. Coast Guard and, when activated, it alerts rescue authorities of trouble and allows them to pinpoint the location of the unit. The units itself can cost $200 or more, but, once purchased, registration is free. It could mean the difference between getting help and struggling to drift to shore.

“In an instant you can be at the mercy of this lake,” Mensch said.