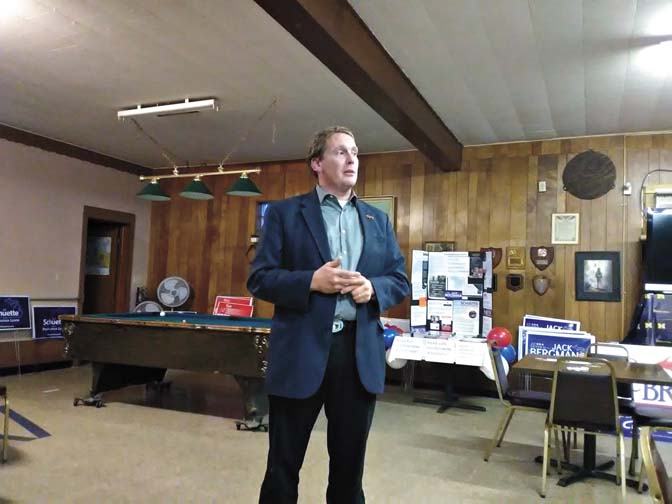 After winning the 38th Michigan State Senate seat, Ed McBroom has come out of the gates running.  The Vulcan dairy farmer recently was elected as the State Senator and has prepareed to take the reins from the term-limited Tom Casperson.

“It is a very humbling event to receive the confidence of so many people of the U.P. I am grateful and also determined to do my best for everyone,” McBroom said.

“Scott called to express his congratulations and we have spoken several times since then.”

The time between being elected and starting his term in Lansing on Jan. 9, McBroom has been working closely with Senator Casperson.

“Tom (Casperson) and I have worked together on many things over the years,” said McBroom. “We both know how critical it is to provide access and service to the people. Many of the issues people care about most involve keeping the government and others from interfering in our way of life in the U.P.

“Our families need opportunities to live and work here and that is why Tom and I both believe natural resource policies are so critical to residents — these policies tie directly into living and working here.”

The 38th State Senate District encompasses 12 counties in the Upper Peninsula. This ranges from the Copper Country and Gogebic County in the west to Schoolcraft County in the East.  McBroom stated his concerns for the 38th include reforming car insurance, local control of education, and strengthening employment opportunities.

Specifically, “the closing of the Ojibway Correctional Facility has been a terrible recent blow to the western part of the district.”

McBroom went on to state that the use of drugs is destroying families all across the U.P.

“Mental health issues have poor and inconsistent access to service across the U.P.,” he said. “Many of our communities continue to struggle to provide the services their citizens have come to expect but with costs climbing more rapidly than revenues.”

State-wide issues that McBroom is concerned about include “the huge population losses experienced in the first ten years of the century.”

“While the economy has become more diverse, there are still many legacy costs for some of our largest cities and the state,” said McBroom. “Other problems include an outmoded method of funding roads, an enormous bureaucratic state that easily outlasts the elected leaders that are supposed to oversee it, and a population that is significantly divided by rural and urban needs and ideology.”

McBroom is seeking to serve on the Natural Resources, Oversight and Ethics, Education, and Elections committees.

He wants to continue the effort to have a coalition of Upper Peninsula legislators.

“Most of the greatest legislative accomplishments for the U.P. over the last eight years were due to the bi-partisan partnership of the four U.P. legislators,” he said. “‘U.P. before party,’ is an absolutely essential axiom and value. I am looking forward to working with the other legislators to have a powerful team representing the needs of the whole U.P. together in Lansing.”

HOUGHTON — Thomas Jarvis Friday submitted this article to the Daily Mining Gazette, which originally appeared in ...