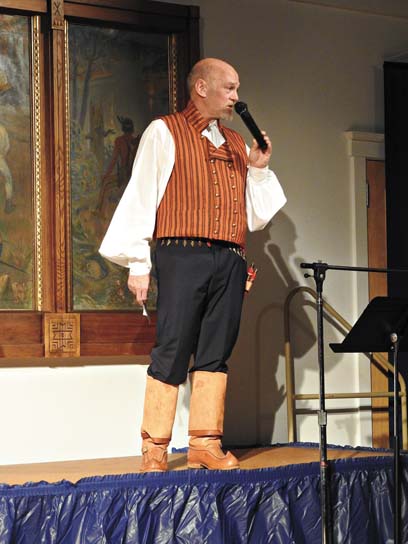 “It’s something to be very proud of, and we’re happy we always have new talent, community members willing to come out in the winter and celebrate with us,” said Jim Kurtti, director of the Finnish American Heritage Center.

As always, the night also marked the announcement of this year’s Hankookin Heikki — or grand marshal of the Heikinpaiva parade. This year’s honoree is Kevin Manninen, dean of Finlandia University’s School of Business. He’s also strengthened the area’s ties to Finland.

He was part of FinnFest’s Board in 2013. And he’s also helped to organize partnerships between Finland and the Copper Country, such as FinnZone and the Michigan-Finland Forest Bioproduct Summit in October.

Jennifer Bow, an orthopedic surgeon with UP Health System — Portage, delivered the keynote address. She spoke about her time living in Finland with her husband, who traveled there as a Fulbright Scholar.

She was taken with the Finn’s commitment to cleanliness and intelligently designed homes. She recalled being confused by one kitchen drawer with slats until she learned it was a cutting board for bread, designed to collect crumbs for easy disposal.

“They have a lot of things that are just so smart, but for whatever reason, haven’t caught on here,” she said.

“They don’t have the ancestry, but they have the interest,” Kurtti said. “I’m very proud of the Finnish-American community, that it embraces anyone who wants to be part of it. I think Finns tend to be surprised that anyone else wants to be Finnish.”

Though the tribute was planned without any knowledge of a Finnish connection, intrepid commenters spotted one. Bush ancestors lived in the Finnish New Sweden colony.

Refreshments afterwards were provided by the Kivajat Finnish American Folk Dancers, who are raising money to perform in Torku, Finland, in June.

Donna Ruohonen of Hancock comes to the celebration every year. Both she and her husband are of Finnish ancestry. Two sons and two grandchildren also live in Finland. Her favorite part of the night was the singing of CLK Elementary School music teacher Matt Riutta.