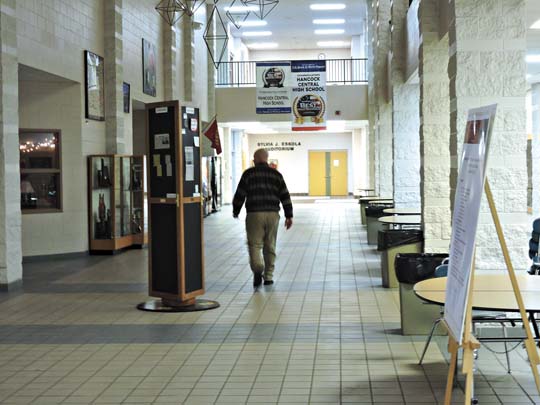 Graham Jaehnig/Daily Mining Gazette The recent lockdown drill left the Hancock Middle School with an eerie sense of desertion and tension. In the hallways, only law enforcement agents, the superintendent and the principal were to be seen as they swept the buildings during the drill

HANCOCK — The recent lockdown drill at the Middle and High schools more than accomplished its goals, according to Ezekiel Ohan, principal of both.

“The lockdown was a success for starting out the initiative of trying to figure out where our weak spots were,” he said, “having our strengths affirmed, and looking at the easiest things that we can do immediately to strengthen security, and to ensure safety.”

Nearly all of those weak spots have already been addressed, said Ohan, such as the outside door to the cafeteria being left open for anyone to access. That door was how the Hancock Police entered the building before the lockdown began. The doors to the Industrial Arts Program, another weak spot detected during the drill, will no longer be left unlocked, he said.

Also, the students have been instructed, “although very, very nice and courteously,” Ohan added, not to open the doors to allow people from outside into the building.

“That is left for the front office,” he said with emphasis.

Those are adjustments that can be, and have been addressed immediately, he said, and those are some of the highlights that were left for administration to look at.

“So, the drill that we ran is truly paying dividends, as I expected it to,” he said.

Discussions were had after the drill about all of the law enforcement agencies having a key for the facility. Ohan said before the drill, those things were not even calculated, or foreseen.

“It enabled us to go ahead and be real about a significant scenario,” he said. “That’s what the purpose of it was, and it was in the crosshairs, and we hit the target. We hit the target.”