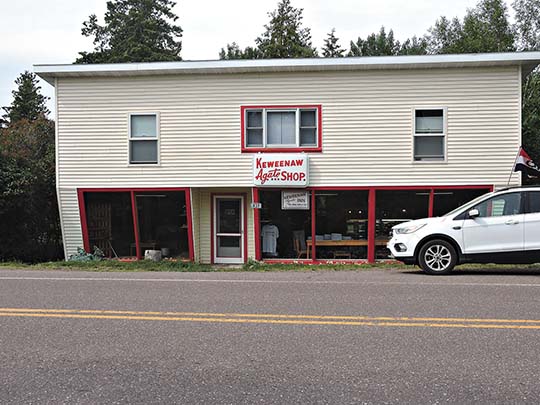 Graham Jaehnig/Daily Mining Gazette What has long been an icon of Copper Harbor’s main street, the Keweenaw Agate Inn is again open for business, operated now by the founders’ granddaughter.

COPPER HARBOR — A new old business opened in Copper Harbor last Thursday when Cheryl Ochodnicky began her first day of operations in the Keweenaw Agate Inn, located at 439 Gratiot Street. And while Ochodnicky enjoys the adventure of opening her own business, there is another aspect to the excitement:

The store was operated for some 20 years by her grandmother, Violet and step-grandfather, Eino Miller, Ochodnicky said. They lived on Vivian Street in Ahmeek, and in 1956, they purchased the building when it was six years old.

“My grandmother was quite an artist, so she made a lot of jewelry, and she would go find rocks,” Ochodnicky said. “My grandfather painted, and they were definitely a big part of this community, and it was seasonal, of course, then they would go back to their home in Ahmeek.”

At the same time, she said, the Millers also owned and operated six rental cabins, of which one is still standing on the next-door lot. Ochodnicky said her mother shared memories of cleaning cabins in addition to car hopping at the (former) A&W restaurant, in her late teens, to save money to attend Michigan Technological University.

The Millers continued operating the Keweenaw Agate Inn until 1973, when they sold the business to whom everyone remembers as “Doc Berry.” 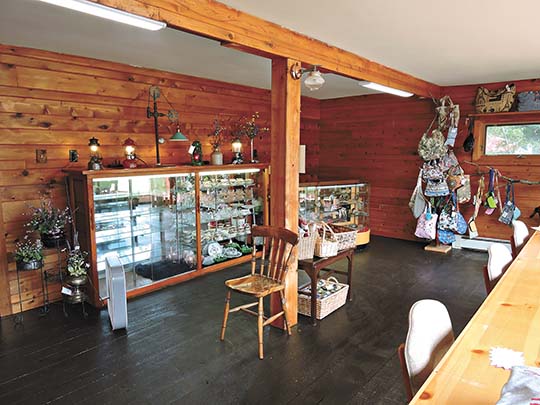 Graham Jaehnig/Daily Mining Gazette While the interior of the business seems a bit empty currently, owner Cheryl Ochodnicky said the business will evolve and grow, largely based on customer feedback.

Ochodnicky said the business, as of right now, is in evolution.

“It’ll evolve as we get feedback,” She said. “My vision is kind of a pop-up shop. When you look at the storefront here, its biggest assets are its location and these windows.”

Currently the store sells glasswares, along with lamps made by Jeff Ihde of Jeff’s Juntique. The store also features Silverwaves Jewelry, made in Bayfield, Wisconsin, and of course, polished rocks.

“We’ve got rocks,” Ochodnicky said. “I’m getting a lot of feedback that people want to dig their hands in some rocks, so I’m going to look that direction as well.”

In taking advantage of the building’s front windows, Ochodnicky said there is a large table, at which she would eventually love to have artists working on jewelry, or something, in the window.

The second story of the structure is also a rental unit which, she said, she rents by the day or by the week. It is equipped with a full kitchen, so longer rentals are possible, she said. She completed some remodeling during 2018 to update the unit. The unit is two bedrooms, with a capacity of five people, so it lends itself to a longer stay, and with this being the first year of business, she has no restrictions on lengths of stay.

Ochodnicky said that deciding to open the business was based partially on how she adjusted to living in the Copper Country, as compared to Brighton, where she lives.

“It’s a different pace of life here,” she said, “so I wasn’t sure. But it immediately felt like home.

“I have a goal,” she added. “Every week, I have to do one more thing. Whether it’s a new place to hike I haven’t been, or — I think I get 10 years of newness every week.”

Things have changed in Copper Harbor since Ochodnicky’s grandparents owned the Keweenaw Agate Inn. The A&W is gone, and the Inn no longer owns the rental cabins. People have gone or left, and others have come into the town. The Keweenaw Agate Inn, however, remains, after 63 years, and is again open for business.

Graham Jaehnig/Daily Mining Gazette What has long been an icon of Copper Harbor’s main street, the Keweenaw Agate Inn is again open for business, operated now by the founders’ granddaughter.

Graham Jaehnig/Daily Mining Gazette While the interior of the business seems a bit empty currently, owner Cheryl Ochodnicky said the business will evolve and grow, largely based on customer feedback.