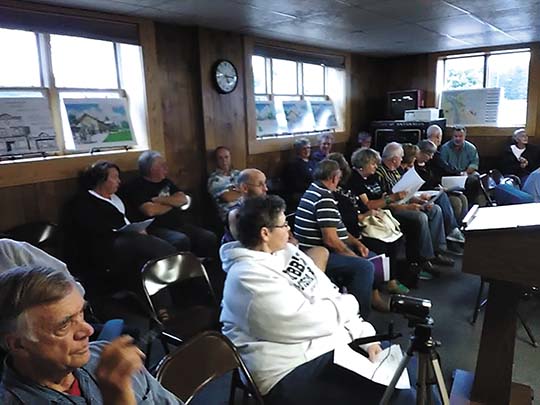 The Ontonagon Village Council chambers were packed in regards to the vllage allowing a retail marijuana business to open. (Skip Schulz/For the Gazette)

The Aug. 12 meeting of the Ontonagon Village Council, where the council voted 4-3 to not opt out of allowing a recreational marijuana retail business to open in the village, continues to bring people to council meetings.  Once again, the council chambers were crowded with people voicing their opposition to having an ordinance allowing for a retail store to sell marijuana.

Unlike the Aug. 26 meeting, where the husband of member Sarah Hopper spoke in support of a marijuana business locating in Ontonagon, Monday night’s meeting had no one speaking in support.

First to speak was former Ontonagon village attorney Ted Baird. Baird stated that it will be more difficult to opt out at a later date if the council votes to allow a marijuana retail store to open.

A common thread amongst those speaking against dealt with what they allege to be potential law enforcement problems.  At the Aug. 26 meeting, a former narcotics law enforcement officer from Wisconsin, who has property in Ontonagon County, spoke about the impact marijuana has on both law enforcement and the family.

At Monday night’s meeting, former village police officer Tim Guzek asked the council whether they did their homework on the issue.

“I think it is very dangerous bringing recreational marijuana (business) here,” he said.

Others questioned whether the money the village would get from a retail marijuana business would justify having it.

Cecilia Warren used the state of Colorado as a reference point.

“I don’t feel the money coming to us is that much,” she said.  “If you get in, you can’t get out. We voted in Ontonagon County not to legalize recreational marijuana. Breaks my heart that you guys are here to represent us, and you would vote yes.”

Tom Hamilton questioned why he has not seen a representative of the Ontonagon County Sheriff’s Department at the meetings. He also stated he did not feel the village will get that much revenue from a business.  He also feels that it starts with marijuana and will lead to other drugs.

While Norm Pestka intended to speak in detail about allegations of his construction company colluding with manager Joe Erickson on the alleged removal of property at the soon to be demolished former Wagers Restaurant, he used his time during public comment to speak in opposition to a marijuana retail business.

Pestka talked about the problems he has had over the years of former employees not passing a drug test and wanting to drive his heavy equipment.

Member Mike Mogen gave a detailed report at the end of the meeting going over what he feels the little amount of revenue the village will get after much of the money goes to the state agency managing the legal sale of marijuana.

Mogen received applause from those attending after his report.

He was one of the three council members that voted to opt out of allowing for a retail marijuana business. The others were Junior Marks and John Hamm.

Joe Erickson went over the legal process of developing an ordinance for a retail business. He stated that the draft of the ordinance he presented to the council will now go to the Planning Commission.

The three-page draft is based on the current ordinance allowing for a medical marijuana business. It was changed to simply state, “marijuana.” After this goes through the Planning Commission, the council will then make the final decision.