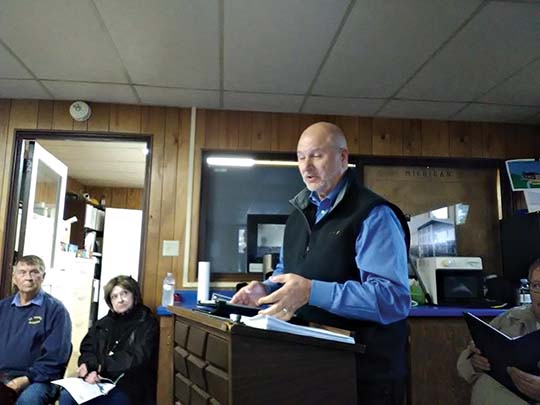 Skip Schulz/For the Gazette John Iacoangeli, Project Rising Tide consultant to the village of Ontonagon, gave a presentation on the 30-year renewal of the village’s Downtown Development Authority plan, tax increment financing, and the DDA expanding its district at a recent council meeting.

ONTONAGON — Two public hearings were held this past Monday night in the crowded Ontonagon Village Council chambers. One for the Ontonagon Downtown Development Authority (DDA) Plan Amendment and the other for the DDA District expansion.

Former Governor Rick Snyder chose Ontonagon as a second round participant of the Project Rising Tide (PRT) community. Ontonagon’s PRT consultant, John Iacoangeli, gave a description of the amendment. His presentation included projects that will be funded by the Tax Increment Financing (TIF) capture.

“The village has a Downtown Development Authority that has been in existence since the late 1980’s. They have a development plan that is on the books that is scheduled to expire in February of 2020. In order for the DDA to continue to capture tax increment revenues in the district and to do projects, which are needed, they need to amend and re-state this development plan for another 30 years,” said Iacoangeli.

According to Iacoangeli, the DDA worked with PRT in identifying projects in the development plan.

“The DDA can only spend money that it collects on projects identified in the plan. The projects are pretty visionary and very encompassing,” Iacoangeli said. “They amount to over $14 Million in projects. In all likelihood they will not accomplish that. (But) you always want to identify more projects then you have revenues…so you have different buckets to spend the money.”

Iacoangeli broke down specifically the projects where that $14 Million would go.

“Once the plan is formally adopted by ordinance from the Village Council it will go and stay in effect for 30 years until such time it is amended or re-stated,” he said.

The projects identified included to create a non-motorized connection between the downtown and the marina using the former railroad right of way. Another is to do improvements on Rose Island, which Iacoangeli says has been identified for years.

One other project he stated was to improve the Rockland Road Intersection.

“To make it more of a defined entry into downtown,” he said.

This project plan includes side streets that are in need of repair, along with sewer and sanitary extension onto Rose Island.

The amended DDA plan includes an attempt to get funds to property acquisition and to assist property owners with the redevelopment of their property.

Marty Heindrick and her husband have an asphalt business that they plan on bringing to Ontonagon County. Currently they have one of the Top 5 asphalt businesses in Rochester. She gave an optimistic prognosis of the quality, less expensive costs to residents, and the prospects of starting that business in the village.

“We love the community and the opportunities it brings to the village. This is something we are looking at in a few years,” Heindrick said.

Leesa Uttecht asked about her property tax assessment and questioned how they are going to benefit.

“I’m one block off River Street. According to the only map that is viewable, I’m in the district,” she said.

Her concern was the cost and assessment of her property taxes.

“To my understanding, only the ones in the perimeter of downtown, not the entire village…who else will benefit?” she asked.

“It’s not a new tax on property. When the DDA was created in 1985, and went into effect in 1986, the total taxable value, was $15.17 Million. That taxable value as of 2018 is $20 Million. The DDA captures the difference between the $15.1 Million and the $20 Million. So they capture $4.8 Million. Out of that capture of taxable evaluation, the same millage is applied to everyone in the community,” Iacoangeli said.

According to Iacoangeli there will be no property tax increase from this plan and that it is the village treasurer that will give the DDA the increased tax revenues from the 1986 to the current taxable value, and allocate other village taxable revenues.

The specific map of the expanded DDA district is available at the village offices. It includes the US 45/Rockland Road corridor, expanding to select streets connecting to the current downtown area, which includes to the recreation center. The expansion also includes the location of the former school, and to the Ontonagon Industrial Zone. That was the Renaissance Zone off of Giesau Road and by the court house.

The council unanimously supported the updated DDA ordinance and the expanded area. 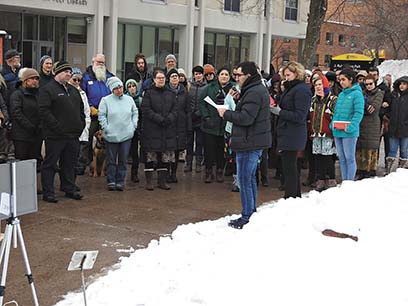