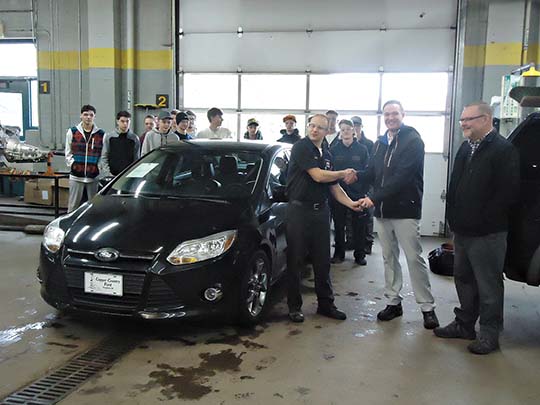 HANCOCK — David Narhi and Jeff LaMuth, automotive technology instructors with the Copper Country Intermediate School District, accepted a 2013 Focus donated by Ford during the autotech’s class Wenesday. The car was made available to the class because of their participation in Ford’s Academic Career Exploration (ACE), a program offered by Ford through local dealerships – in this case, Copper Country Ford.

“The ACE program takes roughly 60 % of our senior master training program and gives it to them at the high school level,” said Brandon Dixon, a Ford representative who was present when the car was donated. “It’s because of the partnership between Copper Country Ford and the CCISD (that) allowed us to donate this vehicle.”

The ACE program is largely computer-based modules that complement the students’ hands-on course work, which they get by working on donated cars. This means that students seldom get the opportunity to work on newer model vehicles.

“A lot of things change over the years and the technology gets greater,” said Corey King, CCISD board member and member of Copper Country Ford. “The donations that they had gotten in the past were a little dated.”

The students, while eager to get their hands dirty on any vehicle, were aware of the issue. 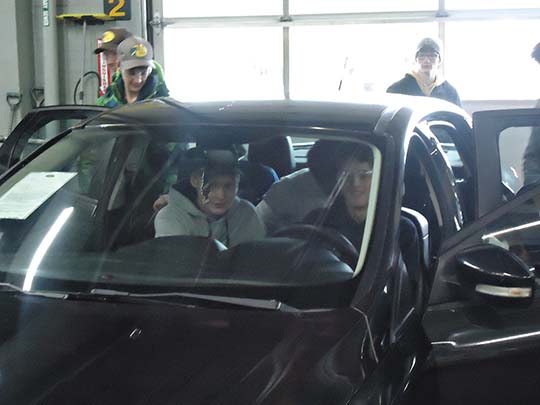 (Jon Jaehnig/for the Gazette) Eager students Branden Hopp (Left) and Luke Marcotte (Right) start up the car as soon as the ceremony is over.

“(Working on newer cars) helps me learn more than some of the older vehicles with older technology,” said Keya Chosa, one of the students in the class.

Chosa was able to take the class at the suggestion of his guidance counselor because he is interested in pursuing a career in the automotive industry.

“The online modules are pretty interesting and teach me a lot more than only the tasks that we do in the shop,” he said.

Narhi and LaMuth have three classes with 58 total students from schools all over the Copper Country.

“We have a limited number of slots,” said Shawn Kolbus, administrator at the Career Tech Center on Quincy Street in Hancock, where the autotech class is located. “We give slots to the schools based on their population.”

David Johnson, the owner of Copper Country Ford, wished to express his gratitude to the board members, instructors, and volunteers who made the Career Technical Education and autotech classes possible. Narhi worked for Johnson before leaving to teach the autotech class for the CCISD. Six current or past employees at Copper Country Ford had been students in the program.

“I’d really like to express my gratitude to Copper Country Ford for offering the ACE program and recognize the students’ efforts in taking and completing the course,” said Narhi.

(Photo courtesy of votesmart.com) Senator Mike Shirkey, Chairman of the House Government Operations Committee, has received more contributions over the last eight years from health plan donors than any individual lawmaker. He has also served as the chairman of the Senate Health Policy Committee.

(Garrett Neese/Daily Mining Gazette) Meral Jackson, Marilyn Cooper and Kristine Bradof write down suggestions for getting public input into the redevelopment process during the second meeting of a citizens’ group focused on Houghton’s proposed redevelopment of Lakeshore Drive.

(Jon Jaehnig/for the Gazette) Eager students Branden Hopp (Left) and Luke Marcotte (Right) start up the car as soon as the ceremony is over. 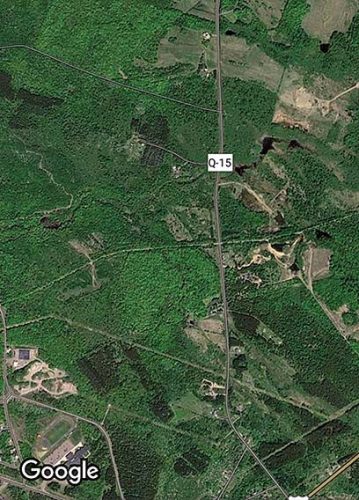