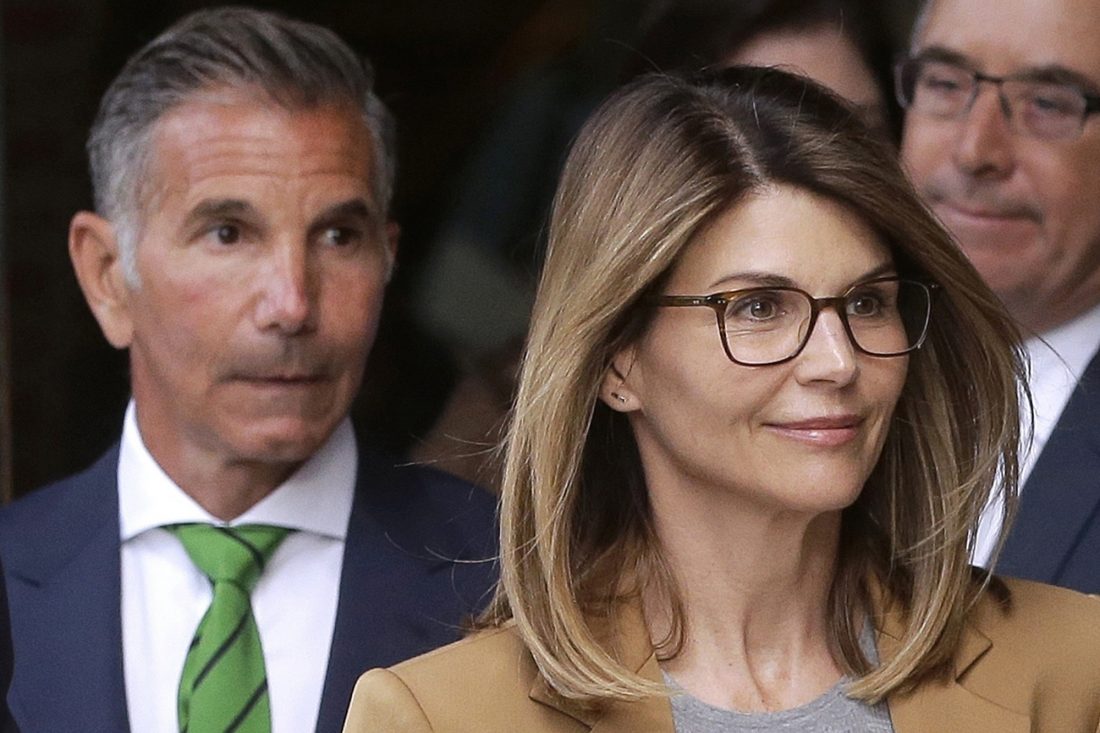 FILE - In this April 3, 2019, file photo, actress Lori Loughlin, front, and her husband, clothing designer Mossimo Giannulli, left, depart federal court in Boston after a hearing in a nationwide college admissions bribery scandal. On Thursday, May 21, 2020, the U.S. Attorney's Office in Boston said Loughlin and Giannulli have agreed to plead guilty to charges of trying to secure the fraudulent admission of their two children to the University of Southern California as purported athletic recruits. (AP Photo/Steven Senne, File)

“Full House” actress Lori Loughlin has agreed to serve two months behind bars and her fashion designer husband, Mossimo Giannulli, has agreed to serve five months as part of a deal to plead guilty to cheating the college admissions process, according to court papers filed Thursday.

Loughlin, 55, and Giannulli, 56, are scheduled to plead guilty Friday via video conference before a federal judge in Boston, who must approve the deal.

It’s a stunning reversal for the famous couple who insisted for the last year they were innocent and that investigators had fabricated evidence against them. Their decision comes about two weeks after the judge rejected their bid to dismiss the case over allegations of misconduct by federal authorities.

“I think they made a calculated assessment that the risks were just too great” to bring the case to trial, said former federal prosecutor Bradley Simon.

They were scheduled to go to trial in October on charges that they paid $500,000 in bribes to get their two daughters into the University of Southern California as crew team recruits, even though neither of them played the sport. They helped create fake athletic profiles for their daughters by sending the admitted ringleader of the scheme, admissions consultant Rick Singer, photos of the teens posing on rowing machines, authorities said.

Lawyers for Loughlin and Giannulli had argued that the couple believed the payments were “legitimate donations” that would go directly to USC as a fundraising gift or support Singer’s charity. They also accused prosecutors of hiding crucial evidence that could prove the couple’s innocence because it would undermine their case.

Simon said the couple’s lawyers may think that Loughlin and Giannulli have a chance of avoiding prison altogether and serving their punishments at home because of the coronavirus pandemic.

Attorney General William Barr has ordered the Bureau of Prisons to increase the use of home confinement and expedite the release of eligible high-risk inmates because of the virus crisis. The pandemic has already delayed the prison sentences of some parents who have pleaded guilty in the college admissions case and allowed others to go home early.

“It may have been a very clever move by the lawyers,” said Simon, now with the firm Windels Marx in New York.

Prosecutors were also facing the risk of embarrassment if they lost the high-profile case, and the couple’s attorneys had raised some viable lines of defense for trial, said former assistant U.S. attorney Jeff Cramer.

“For both sides, from the prosecutors’ side and the defense side, I think this is a fair outcome,” said Cramer, now managing director of Berkeley Research Group consulting firm.

Loughlin and Giannulli were among 50 people arrested last year in the case dubbed “Operation Varsity Blues” that rocked the word of higher education. They are the 23rd and 24th parents to plead guilty in the case.

The case uncovered a scheme in which wealthy parents paid huge sums to secure students’ admission at elite schools as fake athletic recruits or have someone cheat on their entrance exams, authorities said.

U.S. Attorney Andrew Lelling said his office will “continue to pursue accountability for undermining the integrity of college admissions.”

“Under the plea agreements filed today, these defendants will serve prison terms reflecting their respective roles in a conspiracy to corrupt the college admissions process and which are consistent with prior sentences in this case,” he said in an emailed statement.

Others parents who’ve been sent to prison for participating in the scam include “Desperate Housewives” actress Felicity Huffman. She served nearly two weeks behind bars late last year after she admitted to paying $15,000 to have someone correct her daughter’s entrance exam answers.

The judge has allowed other parents, including the heiress to the Hot Pockets fortune, to put off their prison sentences because of the virus outbreak.

Michelle Janavs, whose family invented Hot Pockets, and Douglas Hodge, the ex-CEO of Pacific Investment Management Co., are allowed to remain free until at least June 30, the judge ruled. The judge said he would consider further delays if the virus crisis hasn’t lessened by then.