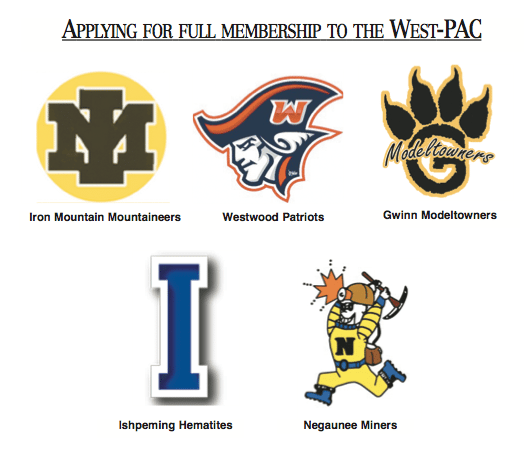 The first step in expanding the West-PAC was completed on Tuesday.

“The most important contingency is being able to create schedules for all schools involved,” West-PAC commissioner and Calumet athletic director Sean Jacques said in a press release. “Each sponsored sport presents unique scheduling challenges that must be discussed and approved before the membership applications are finalized.

“To put it another way, the hard work of planning and molding this larger-scale West-PAC into a viable conference for all involved schools is the next task at hand.”

With the addition of the five schools, the West-PAC will now include 17 of the 24 11-person football teams in the U.P. Hurley, Gogebic and Northland Pines are currently in the conference for football, while Bark River-Harris, Norway, Munising and Lake Linden-Hubbell were approved for football membership this year to begin play in 2018.

The five schools coming from the Mid-Peninsula conference will make the West-PAC a 10-team league for all other sports. Now, the ADs have to figure out a way to make the scheduling work across the board. They will reconvene in early November for a meeting to begin working out the details.

“I have been in contact with all of the applicants, and each of them is appreciative for the opportunity and are willing to work hard to make this a reality,” Jacques said. “There is no firm timeline for finalization.”

With the M-PC dissolving, that leaves Gladstone and Manistique without a conference — both cited travel distance as the reason for not applying to the West-PAC.

This was Gladstone’s first year in the M-PC after making the move from the Great Northern Conference. Gladstone will now look to re-join the GNC.

“I talked to all the GNC teams and they definitely want us back in it to get more games and get more people in the conference,” Gladstone athletic director Andy Jacques told Mike Mattson of the Daily Press (Escanaba). “All in all, we will do what we need to do to put games together and get schedules all figured out now. We will play who we need to play.”

The recent changes leave Manistique with the most uncertain future. Manistique’s eastern location compared to the other schools makes it difficult in deciding the next step in finding a new conference.

“I’m disappointed more than anything that the conference appears to be dissolving,” Manistique athletic director Rob Ryan told Mattson. “It’s been a high-quality Class C conference in the U.P. and the state for 40 years. To see it unravel makes me sad.

“I know this is driven by declining enrollments and driven by football. Schools have to look at what is best for them. I have no hard feelings for those schools. But we are challenged geographically. We are in an isolated area.”

Ryan and Manistique may be forced to compete as an independent for a year while they look for a new conference home. The focus on the search will be getting Manistique in a football-only conference and a separate conference for all other sports.

“I talked to our school board Monday and there are a couple options to look at,” Ryan told Mattson. “I will get together again with our administration and board and coaches. We may be independent for one year to see how things unfold and to see what options there are. We don’t want to be an independent.”

(Gladstone and Manistique quotes and information were first reported by Mike Mattson of the Daily Press.)