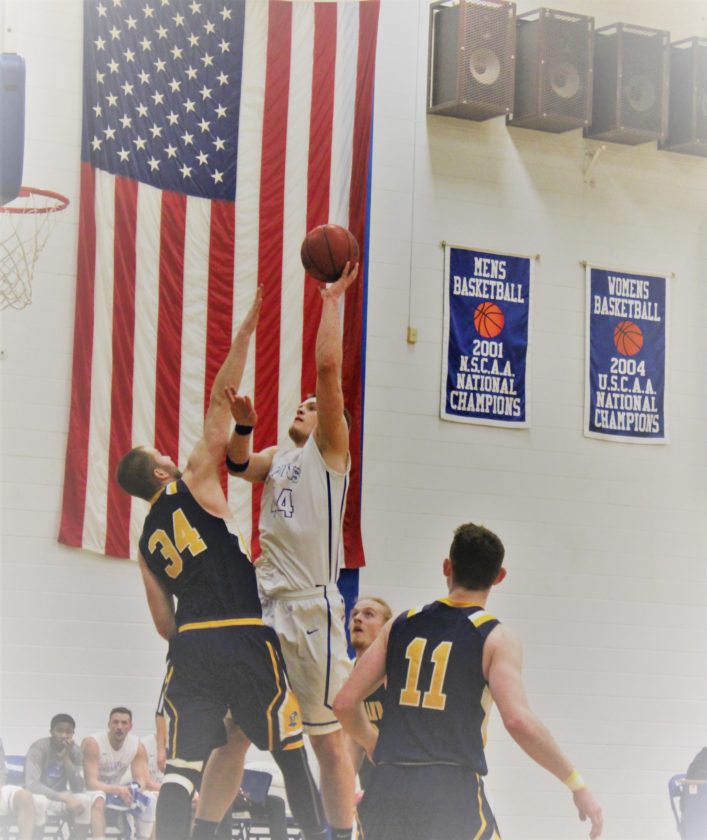 Austin Carlson of Finlandia University goes up for a shot in Saturday's game versus Lakeland College at Paavo Nurmi Gym. The Lions dropped their season finale 88-70. (Paul Peterson photo)

HANCOCK — Like many of its games this season, the Finlandia men’s basketball team ended up with the same result: good try, but no cigar.

“I thought we played hard and played a pretty good overall game,” FU coach Mike O’Donnell said after a season-ending 88-70 defeat to Lakeland College. “We just ran out of gas at the end.”

The final score wasn’t indicative of the effort put out by the Lions, who were within 67-64 with just over five minutes to play.

A 12-0 run by the Muskies quickly upped the lead to 79-64, and the Finlandia comeback was chilled.

O’Donnell said the transition game of the Wisconsin team was the major reason for the loss.

“Their transition game killed us in both halves,” he said. “We executed offensively and got the shots we’re comfortable with. But they kept getting baskets in transition, and that made a big difference.”

The Muskies, 15-9 on the season, also had a difference-maker in 6-4 forward Shakur Jinad.

Jinad led all scorers with 27 points and seemed to hit all the big shots when his team needed them.

Finlandia led a good portion of the opening half and took a 39-37 halftime lead on two free throws by Brandon Robinette in the final second of play.

The 6-foot-6 Escanaba product was again the go-to-guy for the Blue and White. He tallied 18 points, with 13 of those in the second half.

Besides Jinad, the Muskies received double-digit scoring from Jequan Pegeese and Pat McDonald with 15 and 12 points respectively.

Geoff Smart sparked the second-half rally by the locals by scoring eight of his 11 points.

Austin Carlson (Crystal Falls) also had a steady game with 12 points and a team-leading 10 rebounds.

“Austin (Carlson) has made progress this season,” he said. “He’s definitely coming around and has been getting more minutes as a result.”

The 4-16 Lions will return their entire roster next season.

“The guys played hard and we’ll have everyone coming back,” O’Donnell said. “If we can add some more quickness and balance, I’m optimistic we’ll get better in the future.”