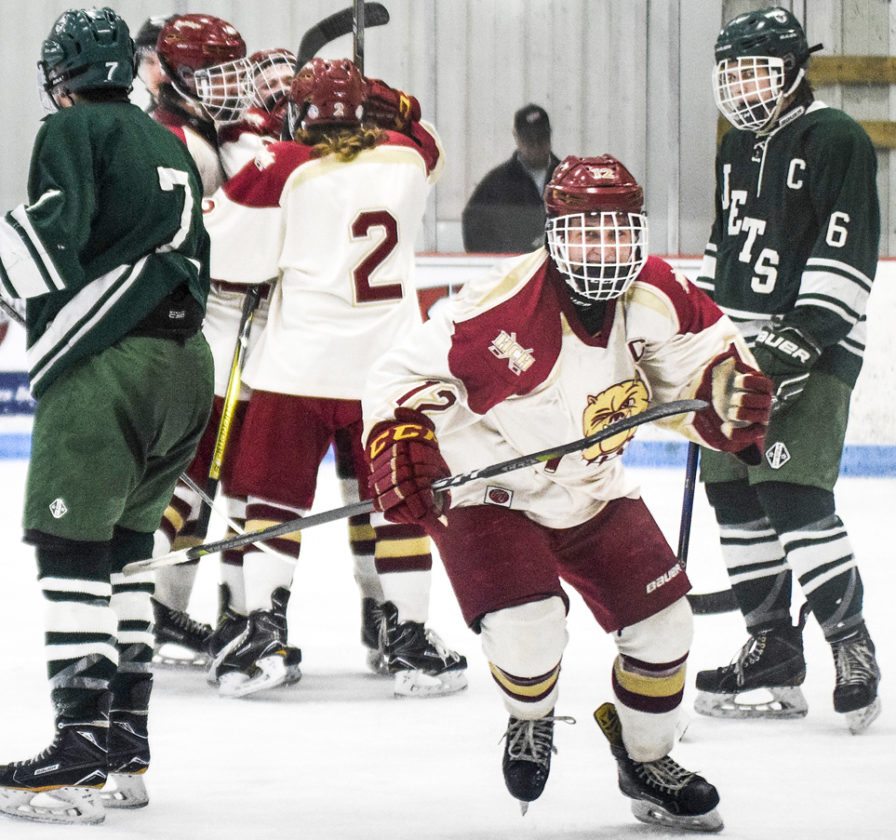 HANCOCK — Teddy Randell may never have skated faster than he did on Thursday night when No. 1 Hancock (18-6) played Jeffers (7-10).

The senior captain dodged opponents, skated after the puck and then — scooped it up with his gloved hand.

He wasn’t skating fast for a scoring chance, or to steal the puck from an opposing player. He was speeding across the ice because his little brother, freshman Bradley Randell, had just recorded his first goal, and Teddy wanted to make sure he saved the puck.

To make things even sweeter, Teddy recorded the assist on Bradley’s first-ever goal as a Bulldog, and Hancock defeated the Jets 8-0 on senior night.

With playoffs approaching rapidly, the Bulldogs are looking to be perfect on every play. They stick to their game whether tied, leading or trailing. But with a seven-goal lead and a few minutes remaining in the second period, coach Dan Rouleau decided to throw out the Xs and Os. He just had one request: get the puck to Bradley.

“We became player-friendly,” Rouleau said. “We put in Brad Randell with his two brothers on a line, because Brad was the only one on the team without a goal. We kind of strayed away from what we normally do at that point, but this is something that kid is going to remember for the rest of his life; being out there with his two brothers and scoring his first high school hockey goal. That was a little bit more important.

“I told them when they went out, I said ‘When I played high school hockey, there was a goal scored Rouleau from Rouleau and Rouleau because I had two brothers on the team.’ I told them ‘I want to hear Randell from Randell and Randell.’ “

Bryce Randell nearly got in on the action, almost tipping the puck, but Tyler Turcotte ended up recording the second assist.

The goal ended the game as Hancock defeated Jeffers on a mercy rule. If Rouleau had his choice, he would have liked to have a closer contest leading up to playoffs, but the Bulldogs have one more tough game against Kingsford before their regional showdown with No. 4 Houghton on Feb. 26.

“It was kind of anticlimactic,” he said. “It would have been nice to be in a closer one going into the playoffs, but we have Kingsford on Monday and it won’t be easy down there, so hopefully it will be a good send-off for the playoffs”

And the game served it’s purpose. While not the kind of matchup that allows for improvement or attention to details, it allowed the Bulldogs to celebrate their senior class. Tyler Turcotte, Carter Nettell, Tyler Brunet, Travis Pietila, Teddy Randell, Jakob Vettori, Michael Stuber and Dawson Kero were all honored before the game.

For Rouleau, it was a bittersweet night. There are two things the long-time coach hates each season: cutting players at the start, and saying goodbye to his seniors at the end.

“I often say over the years, that when we get to the senior banquet, that the worst thing about coaching high school hockey is seeing your senior class graduate every year,” he said. “A lot of these kids come in as freshman and you get to know them over the years. This is a good group, and you don’t like letting them go.”

While Rouleau was battling dueling emotions; part happiness and part sadness, Jeffers coach Pat Nettell was feeling something else: Disappointment.

“We had a very poor performance, and it is very dissatisfying,” he said. “They’ve mercy-ruled us twice this season, which is unacceptable.”

Hancock got out to a 4-0 lead after the first period, before scoring four more to secure the win in the second.

“You can come back from that,” Nettell said of Hancock’s four-goal lead. “We’ve come back before, and that should wake everyone up and let them know that it’s time to play hockey. Hancock is beatable, and you can beat them, but you have to have the confidence to do it. For some reason they don’t think they can play with Hancock, and they are beat before they even hit the ice.”

Six players scored for Hancock. Teddy Randell and Bryce Randell each had two goals, and Alex Nordstrom, Austin Salani, Petr Anderson and Bradley Randell all contributed one. The Bulldogs owned a 23-10 shot advantage over the Jets.

Next up, Hancock travels to Kingsford on Monday at 7 p.m. Jeffers heads to Houghton on Tuesday at 7 p.m.