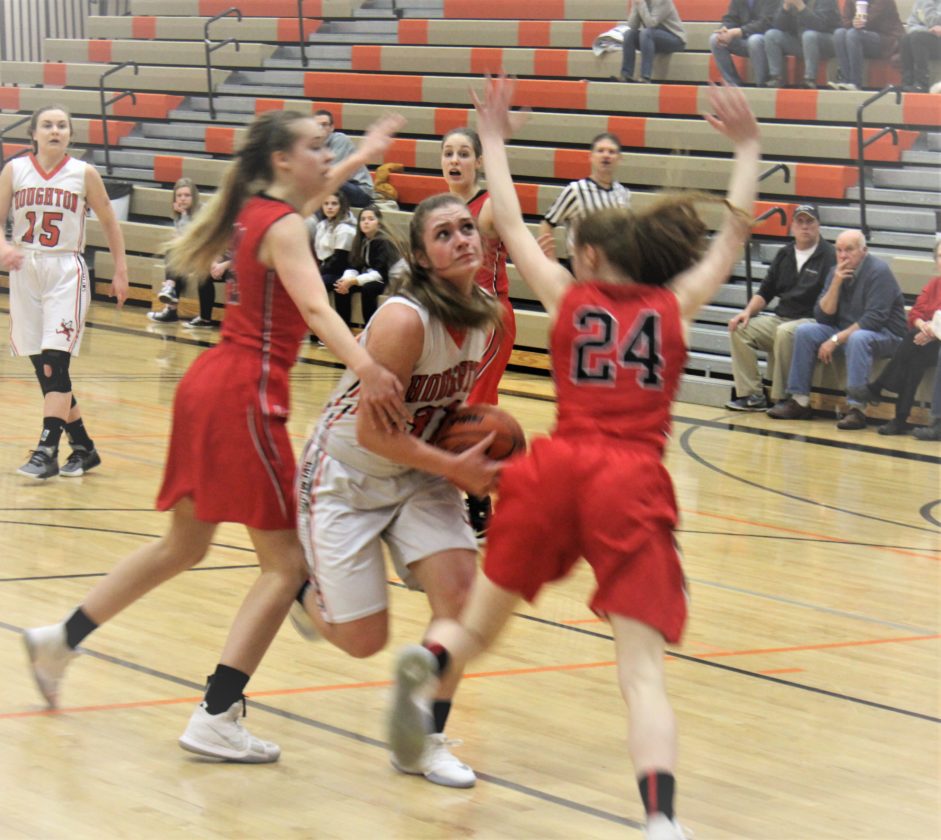 Houghton’s 61-55 win came over a Marquette team that came into the nonleague contest with a 14-3 record and avenged an overtime loss to Marquette last week.

“I thought we played very well tonight,” Houghton coach Julie Filpus said. “And our first half was probably as good as any half we’ve played this season. Very solid.”

The Orange and Black grabbed the early lead behind the play of senior forward Kara Pietila, whose three baskets paced her team to an 18-10 lead after one quarter.

“They (Gremlins) always get after you on defense and they did again in this game,” Smith said. “We came back a few times, but they always seemed to have the answer.”

“It was a very good half. Overall, we have good intensity and we got the job done,” she said. “We had a variety of kids hitting shots… When we have balanced scoring, we’re at our best.”

With a 35-25 lead at halftime, the Gremlins continued to build on the lead in the third quarter as Cassie Ryynanen and Maddie Dillinger aided Houghton to a 50-35 spread after three quarters.

The Redettes, after falling back by as many as 17 points early in the final quarter, began a comeback that brought them to within striking distance.

Avery Ledy sparked the surge with eight points, and it was her bucket and free throw that made it a 56-51 game with 1:01 left.

“With Marquette, you know they’re going to have a surge or two in any game,” Filpus said. “Fortunately, we were able to hit some free throws late.”

Dillinger converted on six free throws in the late going to seal the outcome.

Smith was happy with his team’s hustle.

“We didn’t give up … We kept playing hard. Houghton is a solid team and you can’t afford too many lapses against them,” he said.

Dillinger and Pietila paced the 12-6 winners with 15 points each. The former also had seven assists, with the latter grabbing eight rebounds.

Ryynanen collected 12 points, while Monette had 11 points and seven rebounds.

The Redettes were led by Ledy’s 17 points and five steals. Mo Miller was good for 10 points.

Houghton will travel to Hancock on Monday and then host Westwood on Wednesday in a makeup game. With West Iron County’s loss to Calumet on Thursday, Houghton clinched its 18th West-PAC title in 19 seasons.