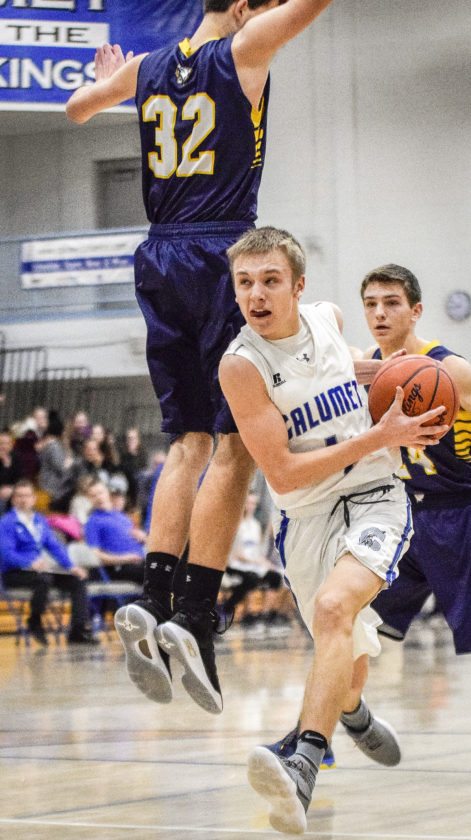 CALUMET — A day after losing to the Westwood Patriots in a physical affair Calumet coach Mike Ojala described as a wrestling match, he wondered how much energy his team would have left to expel against the uptempo Chassell Panthers.

But the truth of it is you could hardly tell Calumet played a game on Thursday, or that the Copper Kings struggled massively on the offensive end, scoring just 30 points against Westwood. Instead, Calumet featured a free-flowing offense that resembled the fast-paced style of an open gym, and the Copper Kings earned a 72-61 nonconference win over Chassell Friday in Calumet.

“The kids like playing like that,” Mike Ojala said. “People like watching it and it’s fun. When you play Chassell, that’s the way it’s going to be. Their tempo is going to create chaos, and we handled that tonight.”

The uptempo style suits Matt Ojala, allowing him to drive and score or create for others off dribble penetration. But the biggest thing Matt brings to Calumet is his ability to break the press and handle pressure — something Chassell thrives on. Mike Ojala admits his team’s press break is essentially “get the ball to Matt,” and it was effective against Chassell’s traps and full-court man pressure. The Copper Kings had just 11 turnovers before the final minute after Matt was taken out of the game with the outcome already decided.

“The biggest thing with our pressure is getting to the other team’s guards,” Chassell coach Bill Sleeman said. “When they have a couple solid guards that don’t panic or don’t get rushed, it definitely makes it hard for us to get the turnovers, which leads to the transition for us. It really never lets us get into the flow that we like to play in.”

Matt’s favorite target was Twardzik; the two worked well as a pick-and-roll combo and it was Twardzik finishing a layup off a pass from Matt for a 55-47 lead heading into the fourth quarter.

Twardzik, a Northern Michigan football commit, utilized his strength to overpower the smaller Chassell defenders in the post on his way to converting 8 of 12 baskets.

Twardzik gave Calumet some separation in the fourth when he finished a putback as he was fouled before making the free throw for the three-point play, giving his team a 63-51 lead midway through the quarter.

“It took a while for Coop after he missed those first six games (due to injury) to get into basketball shape,” Mike Ojala said. “Over the last five to six games, he’s starting to finish with a bit more consistency inside and his minutes are going up.

“He was a man inside tonight and did a heck of a job.”

Chassell’s Elijah Soumis had an efficient night of his own, making 10 of 18 shot attempts as he did most of his damage by knocking down 15-18 foot jumpers. Soumis scored his 24 points despite battling the flu.

“He’s very effective in that midrange to even 3-point range,” Sleeman said. “We definitely want him to be aggressive like that all the time. That’s a tough matchup for most people to guard 6-4 that far from the basket.”

Soumis connected on his first three jumpers to start the second half, but Chassell could not generate enough stops and Calumet still led, 44-33, following a 3 from Travis Ojala to answer Soumis’ scoring spree.

The Panthers would get no closer than 53-47 following a layup from Soumis, only to see Matt Ojala and Twardzik connect on the other end to push the lead back to eight.

“Calumet did a great job of executing when we’d get on a little run,” Sleeman said. “All it takes is a buck and it felt like all our momentum was gone. So credit them for making the plays when they had to never let us get over that hump.”

Trailing 7-6 midway through the first quarter, Calumet (11-5) went on a 16-0 run, capped by a 3 from sophomore Eli McParlan to take a 22-7 lead at the start of the second quarter to take control of the game.

By midway through the second, Calumet reached the 30-point mark on a 3 from Matt Ojala, tying the team’s point total from the 38-30 loss to Westwood on Thursday.

“We couldn’t possibly get more two different styles of basketball games than we had the last two nights,” Mike Ojala said. “We grew up on (Thursday) night and found some toughness that we need to carry on as we go on and play some big games that are coming up.”

Next, Calumet heads to West Iron County on Tuesday. Chassell travels to Baraga on the same day.