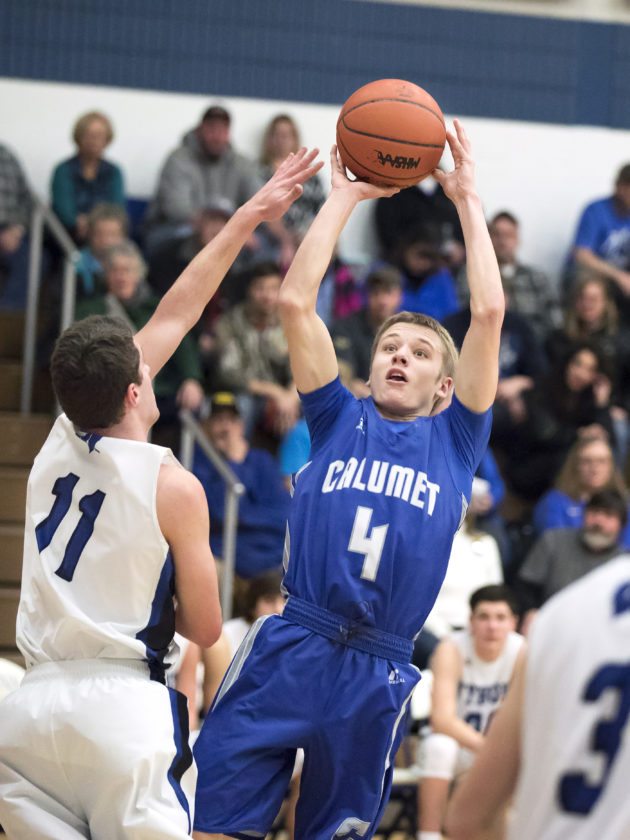 IRON RIVER — Calumet overcame an early deficit behind Matt Ojala’s 30 points in a 58-46 win against West Iron County on Tuesday.

The win brings the Copper Kings (12-5) to even keel with the Wykons in the West-PAC with one loss apiece. Calumet has two games left in the regular season while West Iron (9-9) has one.

The Wykons held a 10-2 lead in the first quarter before Calumet tied and grabbed the lead with a minute remaining.

“It was a lot of emotions, some good athletes going at it for four quarters. Typical games that we have when we play West Iron,” Calumet coach Mike Ojala said. “We were a little short-handed tonight missing some of our bench guys and had some foul trouble. Had some guys that had to step up and do some little things for us to keep us around. We got a little separation towards the end of that fourth quarter.”

Calumet held a 28-24 halftime lead but extended it to 12 points after shifting to a zone defense. It wasn’t a strategic move — the Copper Kings ran into some foul trouble. But it still worked out as Calumet forced 21 turnovers out of the Wykons.

“We had to go to a zone which we don’t like to do and don’t do very often. Our foul situation forced us into that. We were able to get into the passing lanes, get a few tipped balls and stuff,” Coach Ojala said. “Frustrating enough we had three or four opportunities on breaks we didn’t convert on. Our defense, really all night, was great effort wise. They of course have some kids that are hard to guard. I’m proud of the fight those guys showed.”

West Iron head coach Dan Schive said the turnovers and fouls made by his team was the key difference.

“We can’t have 21 turnovers and beat people. That’s pretty much the game in a nutshell is 21 turnovers,” he said. “We got down to four numerous times but if you’re going to give the other team 21 extra possessions and then foul them, you’re going to get beat. That’s what we did.”

It’s the third straight year the teams have split home and away games with each other. The Wykons have won in Calumet while Calumet has won in Iron River. West Iron had ended Calumet’s six-game win streak on Feb. 9 with a 49-44 win.

Ojala said the difference was limiting the Wykons’ free-throw chances. West Iron was 23 of 39 in the Feb. 9 game. On Tuesday, the Wykons were 9 of 16 at the line.

“The first time we played them, we really didn’t do a good job of keeping them off the free-throw line. They just killed us from there in that first game,” Ojala said. “To their credit they have some guys that can get to the rim and they have Nelson inside which is just an impossible matchup.

“I thought tonight we were a little more sound with our footwork. We certainly got some foolish fouls ourselves,” Ojala added. “They’re tough. Fortunately for us, they didn’t catch fire from the perimeter tonight. When those guys, (Caden) Pellizzer and some of those guys start hitting 20-foot shots, they’re absolute nightmares to deal with.”

Shive said his team has to improve decision-making and ball control.

“We’ve lost close ones and we’ve lost some games like this, by 10 or 11. Games that are winnable for us. These kids have never rolled over or hung their heads, ever. They just keep fighting. We’ve got to get better in the next week and a half for the tournament.”