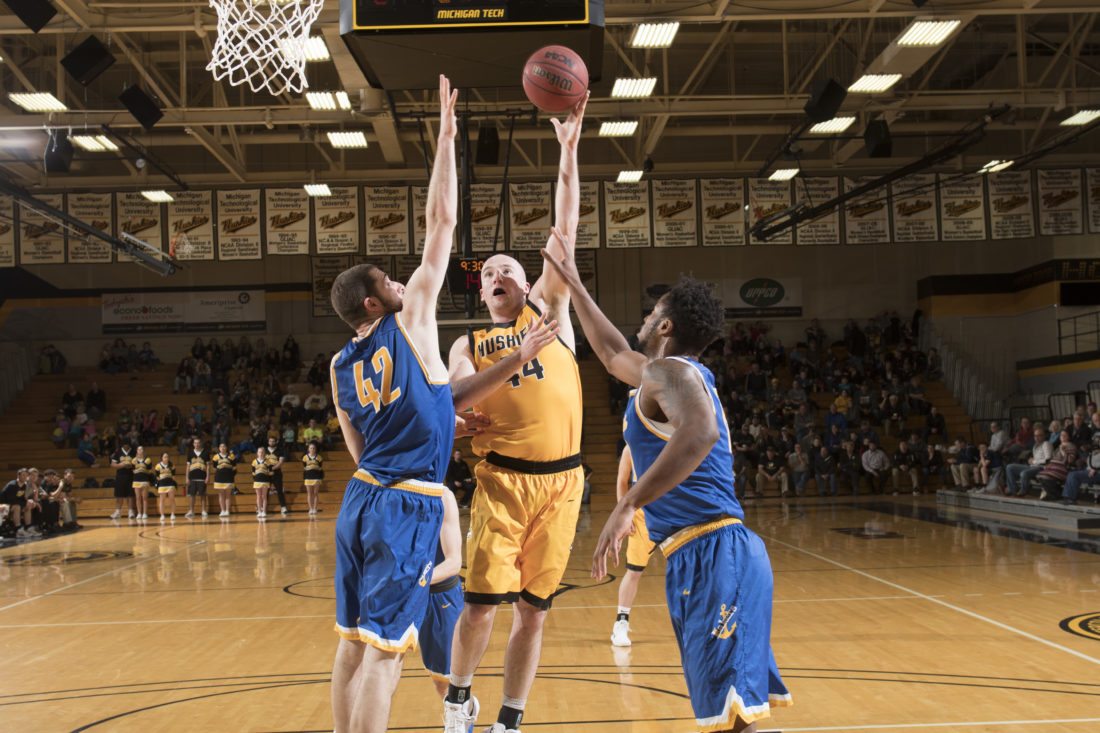 HOUGHTON — Another elite GLIAC opponent, another valiant effort from Michigan Tech, and another overtime loss.

The Huskies are at the most frustrating point for any team attempting to establish themselves among the best: good, but not good enough.

A disjointed first half against Lake Superior State’s athletic defense was too much for Tech to overcome on Saturday, and the Huskies fell 80-76 in overtime at the Wood Gym, solidifying themselves in a state of purgatory in the GLIAC North — not at the top or the bottom, but square in the middle.

“We know we can compete, but at the same time, it’s really frustrating knowing we’re so close but haven’t been able to finish,” said Tech junior Kyle Monroe, who led the Huskies with 34 points and 10 rebounds. “It just gets frustrating having the same results at the end, and it’s because we either start out slow or go on a stretch when we can’t get it done.”

Similar to the Ferris State loss, Tech trailed LSSU (20-6, 14-4) by double digits in the first half. And just like Thursday’s defeat when Tech led by 3 with 6.9 seconds left before Ferris State’s Noah King drilled a 3 off an offensive rebound, Tech (13-12, 10-8) led LSSU down the stretch. Two free throws by senior A.J. Grazulis put Tech ahead 66-64 with 3:47 left in overtime, but LSSU answered with a 7-0 run before hanging on to the lead to the end.

“I thought going into the year, and I told them all year that there’s a good team here if we do stuff right,” Tech coach Kevin Luke said. “I love these guys, but we haven’t committed to doing it yet. We have good players, we have good systems and we have to execute them better and longer.”

LSSU senior Akaemji Williams led the way with 17 points on 6 of 19 shooting as Tech did a better job against him than the previous meeting; Williams had 33 points while making 15 of 20 shots in his team’s Jan. 13 win. For the most part, Tech had Williams settling for mid-range jumpers, including the 18-footer from the corner at the end of regulation that could have won the game.

But with his shot not falling, Williams was able to attack Tech’s defense by being a facilitator. He finished with 10 assists, including on three consecutive possessions in overtime. Williams found senior Tim Cairnduff for a 3 in the corner for a 71-66 lead before hitting sophomore Ke’Montrece Collins for another 3 for a 74-69 advantage with 1:38 left. After he scored a layup himself off a dribble drive, Williams set up Collins for a layup and a 78-73 lead with 16 seconds left.

“The league knows how good (Williams) is,” Luke said. “You just got to feel fortunate to limit him to six baskets, but you can’t give up 10 assists. He’s a dynamic player.”

Despite facing double teams and dealing with rotating defenders to his area when he drove, Monroe was efficient, making 11 of 23 shot attempts to get to 34 points. With LSSU in the bonus early on in the second half, Monroe took advantage and consistently drew fouls. He would make 8 of 10 shots at the free-throw line, including two free throws with 9 seconds left to eventually force overtime.

Monroe is shooting 85 percent from the line this season.

“We shoot a ton of free throws every day at practice,” he said. “There’s really no thought going into those. That’s the hoop I shoot on every single day, so it’s just second-nature at this point to step up and put it in.”

Tech entered as the third best team in the nation at taking care of the ball (9.3 turnovers per game), but it was LSSU’s athleticism and speed that had the Huskies out of synch early on. Tech’s eighth turnover of the game led to an uncontested fast-break layup for LSSU senior Josh Goldschmidt and a 27-10 lead with 7 minutes left in the first half.

“This is one of the first times I walked into the locker room and (the players) were upset with themselves,” Luke said. “Because we just didn’t look like ourselves in the first half. I can’t put it any other way. We didn’t execute, we didn’t defend. I think it’s getting to (the players) now. But it’s the same stuff. If we don’t execute our stuff, we’re not the team we should be.”