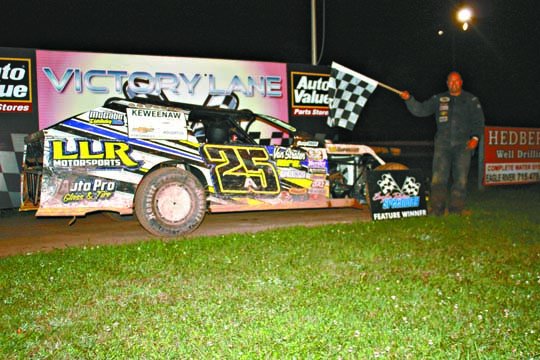 EAGLE RIVER, Wis. — The Eagle River Speedway champions, in all classes, were crowned Friday night. Of the six classes which run on the legendary tri-oval, which run on a weekly basis, four have new champions.

Before the thrill of racing for a class championship even began, the night started off with an accident that put Bruce Crossing’s Jordan Kurtti’s car on its side. This happened before the WISSOTA Street Stock heat racers even got past the flagpole early in the race.

Kurtti’s car got loose coming out of the hairpin third turn, as the cars were bunched up.

When Kurtti tried to bring his car back in line, he was unintentionally hit from behind. This put his car on its passenger side, so Jason Eisel and C.J. Hedges had nowhere to go and end up involved in the altercation.

After Kurtti’s car was put back on its wheels, he got out uninjured. Eisel and Hedges were also not injured. However Hedges’ car lost its radiator, and Kurtti’s car looked to have suffered serious damage.

To the amazement of fellow racers, officials, and fans, Kurtti and his crew worked diligently to put his car back on the track for the WISSOTA Street Stock feature.

Once he was ready, the remaining question, heading into the race, was if Hedges had amassed a big enough lead during the season to hold on to the class championship.

Kurtti also ran his Midwest Modified car during the course of the night.

Wisconsin’s Ryan Valeria and former Ewen resident, David Blackberg, put on an exciting race in the Special “Street Stock Open” race. The two, along with Eisel, and Pro Truck class champion, Jake Ison, all had a shot to win the feature. When the checkered flag dropped, Blackberg held off Valeria, Eisel, and Ison for the win.

While close racing has become a weekly event at the speedway, Friday night, race after race came down to a sprint to the finish.

In particular, one class that had close racing from “green to checker” was in the WISSOTA Midwest Modified. It started in the heat race where the five-time class champion, Jesse Aho of Toivola, who won last week at ABC Raceway in Ashland, Wisconsin, and Eagle River’s Tadd Schoonover battled for the last 10 laps. Aho won the heat, but Schoonover won the feature in a tight race.

Schoonover had the lead for most of the race. On the final lap, Aho got on the inside of Schoonover coming out of the hairpin third turn to win the race by a “nose.”

“The race with Tad was awesome,” said Aho. “We battled hard in both the WISSOTA and Open B-Mod features as the track made it challenging to pass without making contact with other racers.

“I finally got a great opportunity to make a clean pass and take advantage on turn three on the bottom.”

Aho also talked about the effort he put into how he raced.

“It is important to me to race clean,” he said. “The car was great and I owe the crew chief, my dad, and uncle Donny all the credit. They worked hard on the car this week so we could be ready by Friday.”

Winning the Midwest Modified Class championship was Mercerís Steve Altman. This is Altman’s second year of racing in the modified class at the track.

Former Ontonagon resident, Alyssa White, made the long trip from West Fargo, North Dakota, to race at the challenging track. A transmission mount prevented the 15- year-old from finishing in the WISSOTA Pure Stock feature, however, she took a fourth in the heat race.

The track will have a special race this Sunday night. The non-points race will start at 7 p.m., with the gates opening at 5 p.m.

Next year, the Western U.P. will once again have a Stock Car track. Last week, the Mountain Lions unanimously agreed to work with a group to bring back a limited schedule of races at Adventure Mountain Speedway in Greenland.

Currently, the plan is to have the Lions managing and promoting the third-mile dirt track, and it is working on getting people to help them get the clay track set before the winter.

Adventure Mountain Speedway will be running around four races next year on Sunday afternoons. The track is where Aho and Kurtti started in dirt track stock car racing.