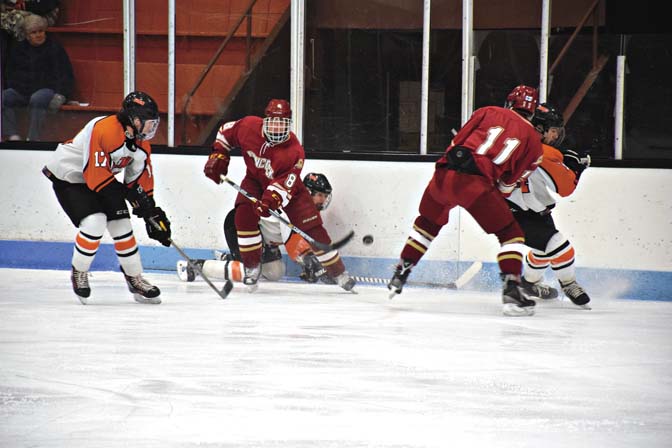 Daver Karnosky/Daily Mining Gazette Hancock’s Colton Salani looks to clear the puck out of his end while under pressure from Houghton’s Brendan Erickson during a game at Dee Stadium.

HANCOCK — For the last three seasons, the Hancock Bulldogs hockey program has found themselves a favorite for the regional title.

Sometimes in order to look forward, you have to look back.

Last season, the Bulldogs cruised to a 19-6-0 regular season. They followed that up with wins over Houghton, L’Anse and Calumet in the regional tournament. After defeating Big Rapids in the quarterfinals, the Bulldogs fell, 2-1, to Detroit Country Day in the state semifinals.

“Last season was a very successful season,” said Bulldogs coach Dan Rouleau. “We were ranked No. 1 all year, and unfortunately, it didn’t end the way we wanted. We lost in the semifinals, 2-1. We were unable to tie it up and send it to overtime, but all in all it was a very successful year.”

For Hancock to be successful, they are going to need to figure out how to move forward quickly.

“(It’s) not too often that you see this much turnover,” said Rouleau. “With the new (players) coming in, I have seven freshman. I never usually have more than two or three, but this year we have seven coming in.”

The road back to the state tournament will be a long one this season for Hancock. Gone are senior Alex Nordstrom, who scored 33 goals and 61 points as a junior, Teddy Randell, who scored 25 goals and 52 points, and goaltender Dawson Kero, who went 17-6-0 with a 2.29 goals against average.

Nordstrom has jumped out to a fast start with the Grand Prairie Storm of the Alberta Junior Hockey League, scoring 10 goals and 23 points in 22 games. Randell and Kero are part of coach Joe Burcar’s tenure at Finlandia University.

“It was almost a total rebuild,” said Rouleau. “We lost two kids that were two of the best players in the state (along with) a goaltender that was an All-State goaltender.”

The Bulldogs may have some holes to fill this season but have two dual-sport athletes that look to be top scorers for the team in Austin and Colton Salani. The Salani brothers will have be leaders at both ends of the rink this season.

“I do have some talented players coming back (with) Austin and Colton Salani,” Rouleau said. “They are very talented athletes.”

Behind the Salani brothers are three more forwards who have chipped in key goals in various situations for the Bulldogs. Trevor Tchida, Bryce Randell, and Petr Anderson will add scoring depth.

“I got (some) of my leading scorers back,” said Rouleau. “the young guys are going to have to step up this year if we’re going to have any success. Trevor Tchida, along with Bryce Randell, are also going to be in the mix, (as will) Petr Anderson. They’ll be battling each other.”

While their offense has some real promise, the defensive core is thin, at least in experience.

He is not kidding.

Senior Philip Rios returns in goal, and after seeing limited action a year ago, the net is his to start the 2018-19 season.

“Philip is our backup from last year,” Rouleau said. “He most likely will get most of the playing time (because) we have a tough schedule this year. You won’t see those younger guys playing too much in those games.

“Phil should be able to lead us in net.”

Staying competitive with Houghton and Calumet may prove to be a challenge for this growing Bulldogs team.

“It’s going to be an uphill climb against those two teams,” said Rouleau. “We have to be competitive in practice against each other. (Houghton and Calumet) have more talent on paper, so we better be working in the games.

“If we don’t outwork teams like Houghton and Calumet, we’re never going to have a chance to beat them.”

The Bulldogs have a tough schedule but will play 13 home games along with another three at the MacInnes Student Ice Arena.

Hancock will open the season with the annual Copper Island Classic this weekend in Calumet and then travel to face Houghton before they host Hartland at home on Nov. 30. Traverse City Central, Rochester United, and Stevenson all come north before the MacInnes Classic. Brighton, Orchard Lake St. Mary’s and Bay Port come to Hancock in January.

“We’ve had a good following in the last few years,” said Rouleau. “Hopefully, our fans will bare with us going through the growing pains and keep showing up for the games, because they (put) the home rink in our favor.”

The Bulldogs will host Houghton for Wing Ding on Feb. 8 before closing the season with Marquette, Escanaba, and Kingsford before the regional tournament.