Gremlins drop both ends of doubleheader to Mountaineers 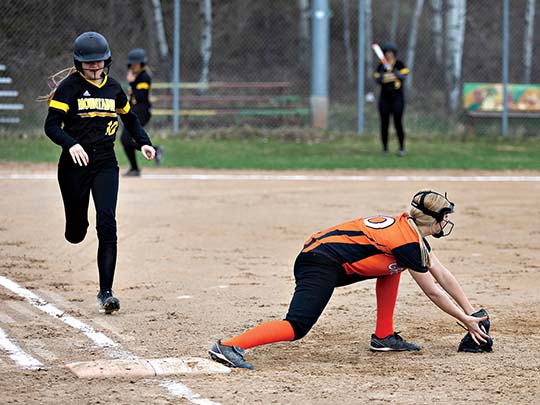 Adam Niemi/Daily News (Iron Mountain) Houghton first baseman Molly Bugni, right, receives the throw at first base for an out as Iron Mountain’s Annslee Runsat runs down the line on Monday in Iron Mountain, Mich.

IRON MOUNTAIN — An 11-run eighth propelled Iron Mountain to a 13-2 win in the first game and a doubleheader sweep over Houghton on Monday.

The Mountaineers (8-4) gave up a pair of tying runs in the seventh but rallied in the eighth for the first game win. Iron Mountain scored five runs in the first inning of the second game en route to a 7-5 win.

Iron Mountain pitcher Claire Mongrain threw to third in the bottom of the seventh, but the throw bounced off the ground and past third baseman Anna Rittenhouse.

Mongrain redeemed herself in Iron Mountain’s huge eighth with a two-run home run to center field.

“I think she was a little mad at the previously play,” Iron Mountain head coach Dean Lefebvre said of Mongrain. “I told the team that there is a lot to learn there. If you make a mistake you need to keep your head in the game and not collapse.”

Mongrain gave up the two unearned runs on four hits with five walks and six strikeouts.

Josie Connors pitched for Houghton and gave up 13 runs (three earned) on 14 hits with three walks and four strikeouts.

In the second game, Iron Mountain pushed five runs across in the first with a bases-loaded walk by Mackenzie Swanson. Houghton made two errors in the inning.

Fortner had an RBI double in the third and scored on an error.

Annslee Runsat and Hannah Proudfit pitched for Iron Mountain, giving up five runs (one unearned) on eight hits with six walks and a strikeout.