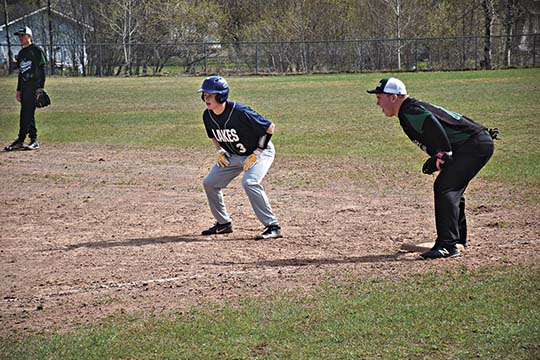 Eddie O’Neill/Daily Mining Gazette Lake Linden-Hubbell’s Caleb Klein leads off from first base during a game against Gogebic Wednesday at Dollar Bay Field.

DOLLAR BAY — The Gogebic Miners baseball has been working all season on playing an error-free game. They almost got it in Game Two of Wednesday’s doubleheader against the Lake Linden-Hubbell Lakes. The Miners had only two errors in their 7-3 win. It was one better than the three they committed in their first game, a 5-1 victory.

“We emphasize defense,” said manager Leo Ribich. “It keeps us in every game. I was very pleased with the way the boys played today.”

“Our pitching was right on,” said Ribich, who is in his third year as manager of the Miners. “Defense and pitching go hand in hand, and that is how we win baseball games.”

Ribich was not the only coach pleased with Tuesday’s performance on the diamond. Lake Linden’s coach Andy Crouch was equally pleased. This was only the third and fourth games for his newly-formed team, and he and his staff have seen a world of improvements since their debut several weeks ago against L’Anse.

“We looked like a baseball team out there today,” he said. “We were making plays. Kellen Klein and Cole Gregoire pitched phenomenal.”

Klein threw the first game striking out seven and only walking three. Gregoire tossed the second game and struck out four while walking just three.

“Obviously, we would like to hit the ball more, but it will come with time,” Crouch said.

In Game One, the Miners got on the scoreboard in the first inning thanks to a base hit by first baseman Brett Heil. He was knocked in by Solberg and the score was 1-0. They would add two more in the second with big base hits by second baseman Jack Matrella and left fielder Patrick Hipenbecker. Hipenbecker led the Miners in hits with two in game one.

Errors haunted the Lakes in the third inning and it led to another Miner run making the score 4-0 in their favor.

The Lakes got their only run in the fifth as Cole Gregoire started things off with a line drive single to left. He advanced on a stolen base and eventually made it home on a wild pitch.

The Miners put one more on the board in the fifth making the score 5-1.

In the second game, things looked similar as Gogebic scored first in the first and put two more tallies on in the second. For the Lakes Cole Gregoire and Carter Crouch crossed home in the first both on wild pitches.

The Miners put some distance between themselves and the Lakes in the fourth innings they were able to tack on four more run making the score 7-2.

In the fifth, Caleb Gregoire got his big hit of the day, an RBI triple, that rolled to the fence in right field. The three-base knock brought home Caleb Klein to make the score 7-3 and that is where the game ended after six innings.

The Lakes will be back at it Thursday at the Dollar Bay field taking on Ontonagon at 4 p.m.