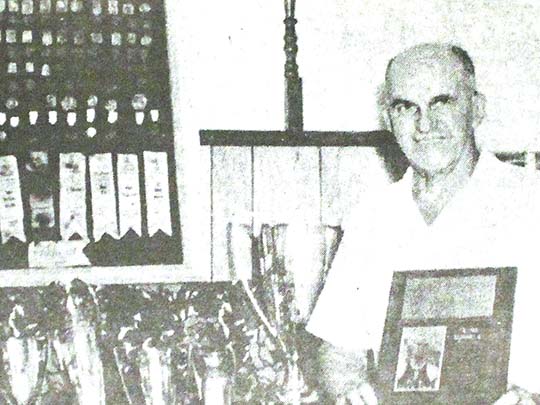 Daily Mining Gazette file photo Tauno Nurmela is pictured with many the trophies, medals and ribbons he won at track meets in the 1930s and 1940.

COVINGTON — His hero was Finnish Olympic track star Paavo Nurmi, and the late Tauno Nurmela did his best to duplicate the feats of the famed distance runner.

Nurmela, who was born in Finland, came to the states in the early 1900s with his family, who settled in the Covington area.

By the time he became a young man, Tauno got into competing in track and field events. And he would go just about anywhere to compete.

Glenn Maki, a longtime friend of Nurmela, said he traveled all over the Midwest to find meets.

“He (Nurmela) told me he had competed in events in Minnesota, Illinois, Wisconsin and all around the Upper Peninsula,” Maki said in an interview a few years ago. “He loved to compete.”

Back in the early 1930s and 1940s, open track meets were common in small communities all over.

“Those were tough times in this country,” he told late Mining Gazette reporter Earl Gagnon,” in a 1970 interview. “People wanted something to do …. and something to watch.”

The decathalon, a 10-event sport, was relatively new back then. But the versatility required for the event caught Nurmela’s attention.

“I liked the fact that the decathlon required a lot of different skills,” he said. “It wasn’t just about running or jumping.”

Between the early 1930s and early 1950s, Nurmela collected a total of 167 medals, ribbons and trophies. His last came when he was 43 years old.

But a large 1934 meet in New York Mills, Minnesota, ranked as one of his biggest moments.

Competing in a meet that included several university athletes, Tauno was picked as Most Outstanding Athlete.

He estimated there was a crowd for more than 1,500 on hand.

“That was the most people I ever competed in front of,” he said.

He also competed in cross country skiing and one of his biggest victories came in the 1953 Copper Country Grand Prix held in Coburntown.

At 5-foot-9, 180 pounds, Nurmela wasn’t a big man. But working on the family dairy farm and logging didn’t hurt, either.

After retiring from track, Nurmela became interested in basketball, and according to Maki, “was quite good at it.”