Xpress Self Storage bounces back with win over Auto Pro 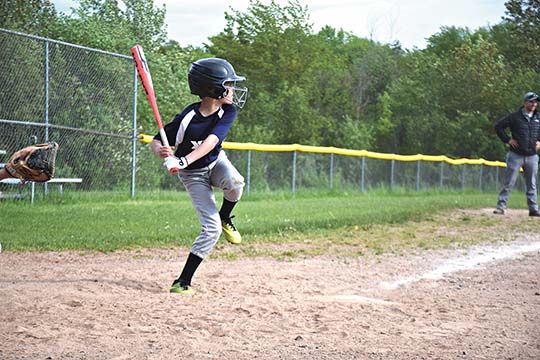 SOUTH RANGE — The top of the Xpress Self Storage line up has been a force to be reckoned with this year in Portage Lake Little League Minors action. They proved that fact once again as they came out swinging in an 11-1 victory over Auto Pro Glass & Tire on Tuesday night.

Brody Donnelly was the first batter of the night and got things started in typical fashion with a triple. Gunner Gullstrand was next up and did one better by hitting a home run.

Benny Keranen then found himself on first base with a single through the left side of the infield to make it 3-0 after a half inning.

But the boys from Auto Pro were not going down easy. They picked up a run of their own in the bottom of the first as Redick Randell got on with a walk and crossed home on a Forrest LaCourt RBI single between first and second. After one inning of play, Xpress Self Storage led 3-1.

Xpress picked up another run in the second and got three more in the third thanks to a familiar scenario. Donnelly started things off with a single. Gullstrand followed with a base rap of his own and they both came home on a Davis Moyle line drive hit to center.

Moyle would come home himself on a Thora Bier single to make the score 7-1.

“Our bats were strong as we were hitting the ball well and making great plays in the field,” said Xpress manager Ross Rinkinen.

On the other hand, despite a hit here and there, Auto Pro could not muster any further runs after the one in the first. They also struggled in the field as they let routine grounders go through their legs and had too many errant throws which led to extra bases for the opponent.

Xpress tacked on four more runs in the fifth inning with base hits once again by Donnelly, Gullstrand and a triple by Moyle.

“Fielding is something our team is working on,” said Auto Pro manager Bruce Larson. “I keep telling them to keep the ball in front of them.”

He noted that one of his players who did keep the ball in front of him was Gage Chynoweth, who had a nice grab in center field early in the game.

“That was not his first one,” said Larson. “He has made a couple of very nice plays for us this year.”

He was also pleased with his pitchers as they threw strikes.

With the win, Xpress Self Storage moved to 7-2 on the year, and the loss dropped Auto Pro to 3-4.