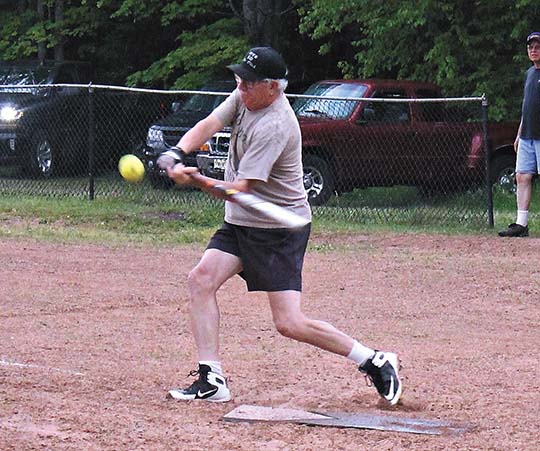 Paul Peterson/For the Gazette Tom LeGault of Houghton takes a swing at a pitch during Monday’s 50 and Over Softball League playoffs in Tapiola.

TAPIOLA — Houghton and Chassell captured wins in the opening night of the Over 50 Softball League playoffs Monday evening.

Houghton scored a 14-5 victory over Tapiola behind the pitching of Steve Dunstan.

In the second game, Chassell was a 6-2 victor over South Range, using the pitching of Steve Giddings to advance.

Dave Fehringer and Dick Franti each had two hits for Range. Joe Rossi was the losing pitcher.

Houghton and Chassell meet at 6:15 p.m. in the next round on Thursday. Range and Tapiola play at 7:15 p.m. in a loser’s bracket game.