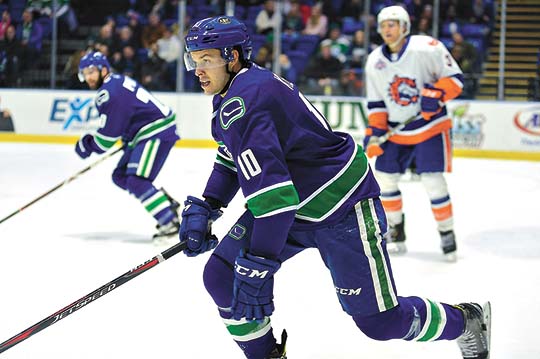 The Comets’ Tanner Kero pursues a loose puck during a game against the Sound Tigers in 2018 in Bridgeport, Connecticut. (Utica Comets/Courtesy Photo)

Tanner Kero signed a two-year, two-way contract with the Dallas Stars on July 1, 2019. He enters his fifth season of pro hockey and has played 72 career NHL games with eight goals and 14 assists-all with the Chicago Blackhawks. The Hancock native also has appeared in 197 career AHL games, including 67 last year with Utica. He tallied a career-high 57 points with the Comets on 24 goals and 33 assists.

While at Tech, Kero was an All-American, the 2014-15 WCHA Player of the Year, the WCHA Outstanding Student-Athlete of the Year, an All-WCHA First Team selection, and won the WCHA scoring title. In 153 career MTU games, he tallied 111 points on 55 goals and 56 assists.

Dane Birks, a native of Merritt, British Columbia, was a sixth-round draft pick of the Penguins in 2013 and played 117 games for Michigan Tech from 2014-18. He tallied seven goals and 23 assists for the Huskies. He signed a two-year deal with Pittsburgh in March 2018.

Birk was traded from the Pittsburgh Penguins to the Arizona Coyotes on June 29. Birks, Phil Kessel and a 2021 fourth-round draft pick were swapped for Alex Galchenyuk and Pierre-Olivier Joseph. Birks played 65 games for the Wheeling Nailers in the ECHL in 2018-19 with a goal and 14 assists.

Pheonix Copley is in his sixth professional season and fourth training camp with the Washington Capitals. In 29 career NHL games, Copley is 16-8-3 with a 2.98 goals-against average and a .901 save percentage. Copley made his NHL debut on February 27, 2016 as a member of the St. Louis Blues at Nashville and made 24 saves in his first career NHL start on January 21, 2017 at Winnipeg.

Jujhar Khaira, a native of Surrey, British Columbia, tallied six goals and 19 assists for 25 points in his only season with the Huskies in 2012-13. He finished tied for fourth on the team in scoring and played in all 37 games. He was named the WCHA Rookie of the Week on November 20 after leading Tech to a pair of overtime wins at Bemidji State with two goals and an assist.

He signed a two-year contract extension with the Edmonton Oilers on July 1. He enters his seventh season of pro hockey with 154 career NHL games under his belt with the Oilers. He has 42 career NHL points on 15 goals and 27 points.

Joel L’Esperance played in 18 NHL games for Dallas last season and scored a pair of goals. His first career NHL goal was in a 4-1 win at Minnesota on March 14. He scored the lone goal for the Stars on April 5 in a 6-1 loss at Chicago. The Brighton native was originally undrafted and signed with Dallas as a free agent on July 1, 2018.

L’Esperance scored 30 AHL goals in his first full pro season, ninth-most in the league in scoring and led the Texas Stars.

He played four seasons at MTU, appearing in 152 career games from 2014-18. He was an alternate captain as a senior and finished with 98 career points, tallying more than 25 points in each of his final three seasons.

Jake Lucchini signed a one-year deal with the Penguins as an undrafted free agent on March 11. He played 15 AHL games for Wilkes-Barre/Scranton at the end of the season, tallying six goals and an assist.

Lucchini, of Trail, British Columbia, received the Merv Youngs MVP Award and the Gary Crosby Memorial Award as the teams’ leading scorer for the second season in a row. Lucchini never missed a game in his Tech career, skating in 164 games. Lucchini became the 66th player in Tech history to reach 100 career points, finishing with 104 points on 45 goals and 59 assists. As a senior, he co-captained and led the team with 26 points on 11 goals and 15 assists.

Mitch Reinke, a native of Stillwater, Minnesota, played two seasons for the Huskies, appearing in 76 games. He was named to the All-WCHA Third Team as a sophomore and to the WCHA All-Rookie Team as a freshman, tallying 44 career points on nine goals and 35 assists. Reinke was originally signed by the Blues as a free agent on March 26, 2018 and made his NHL debut five days later.

He signed a 1-year extension with the St. Louis Blues on July 13. He played in all 76 games last season for the San Antonio Rampage in the AHL. He was named to the AHL All-Rookie Team after setting franchise rookie records for goals (12), assists (33), points (45), and power-play goals (9). He contributed during the Blues’ Stanley Cup Playoff run and was on the ice for the celebration after the Game 7 win.

Matt Roy signed a two-year extension with the Los Angeles Kings in July 2019. He made his NHL debut in 2018-19, appearing in 25 games for the team that drafted him in 2015. Roy scored two goals and added four assists after skating in 45 games for the Ontario Reign in the AHL. He has played 102 career games for Ontario with 12 goals and 35 assists.