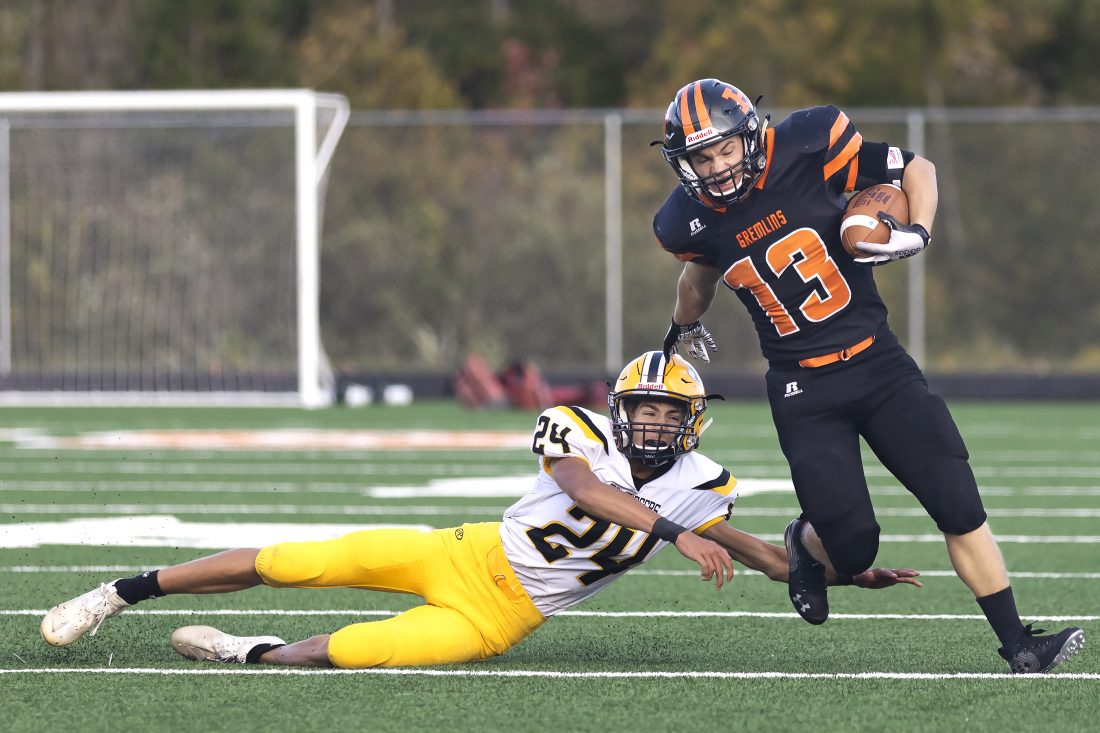 HOUGHTON — It was a chilly, misty night as the lights went on at

Alumni Field, and it made for some interesting Friday night football.

It also made for a short post-game victory huddle for the Iron Mountain Mountaineers as they flattened the Houghton Gremlins 39-0 and soon boarded the bus to get warm.

“Weather certainty was a challenge,” Iron Mountain head coach Robin Marttila said. “We knew we wouldn’t be able to throw the ball much and so w wanted to establish our running game and I thought we did that well early on. We are happy with our first road victory of the season as it was a long bus ride up here.”

After Iron Mountain (3-0) won the toss, they deferred to the Gremlins who went three and out on their first possession of the game. The Mountaineers then took over on their 28-yard line and mounted a three minute running attack featuring their junior running back Caleb Evosevich-Hynes.

At the 4:38 mark, Evosevich-Hynes broke several Gremlin tackles and made it into the end zone for a 43-yard run. He also kicked the extra point to make it 7-0.

The Mountaineers were back at it at the start of the second quarter as they put together a seven-play 39-yard drive that ended with Evosevich-Hynes across the goal line to make it 13-0. He led the Mountaineers with nine carries for a total of 96 yards and two touchdowns.

When the Gremlins (0-3) took over they struggled to mount any offense. A strong Mountaineer’s defense allowed the Gremlins only 109 total yards while the Mountaineers mounted 299 offensive yards.

“We are a young team,” said Gremlins head coach Kurt Huffmaster. “We are starting a lot of juniors and they have some veteran seniors who are very good.”

Among the Iron Mountain seniors was quarterback Marcus Johnson who missed the first two games of the season with a stress fracture in his foot.

“I thought Marcus did a great job for his first game of the season,” Marttila said. “He obviously knows our offense and we are looking for great things from him this year.”

Coming out of the locker room at halftime with a 21-0 lead, the Mountaineers turned to junior running back Dante Basanese to get some work done. He proved to be a winner for them with back-to-back touchdown runs midway through the third quarter. His first one came at the 5:54 mark as the Mountaineers took over at that Gremlins 31-yard line. Johnson stepped back and handed Basanese the ball and he was off for the end zone breaking tackles along the way.

After the kickoff, the Gremlins fumbled the ball and Iron Mountain took over on Houghton’s 38-yard line. On their first play, Johnson turned again to Basanese and the speedster took it all the way in for a touchdown which extended the score to 36-0. The junior had two runs for 70 yards and two touchdowns.

“Dante obviously had a great night for us, and he made it look easy,” Marttila said.

Up 36 points the game went to a running-clock mode which ended the third period and continued throughout all of the fourth.

The only scoring in the final 12 minutes was a 25-yard field goal kicked by senior Gavin Goulette.