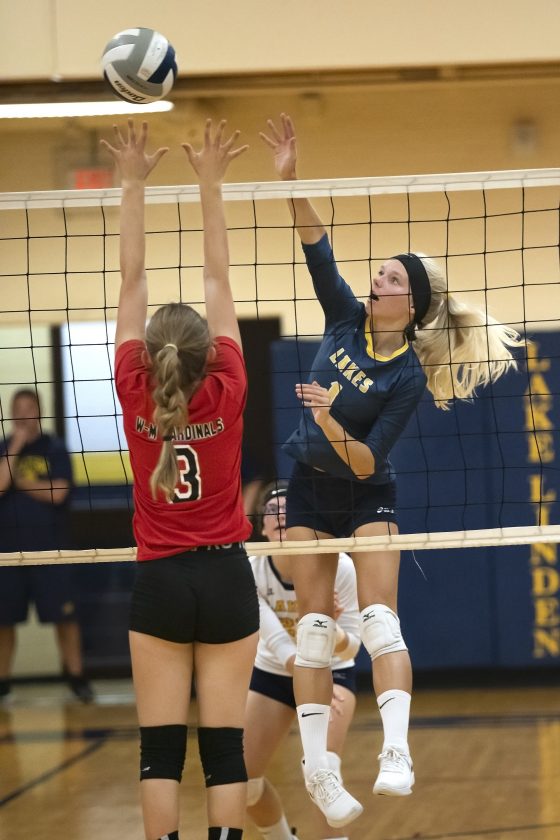 LAKE LINDEN — After dropping the first two sets against Lake-Linden Hubbell, it didn’t look good for Wakefield-Marenisco (4-1) on the volleyball court Thursday night. Not only were they down 2-0, the Cardinal’s hadn’t led a set since the first point of the first set.

“We came out and we were shell shocked,” said Wakefield’s head coach Jessica Novascone. “We had nine serve-receive errors. But at the end of the second set, I could see the girls were starting to clean things up, and I thought if we could carry that into the third set, we could take it.”

“After the third set, I told the girls to keep it up,” she said. “Once the momentum got going and they were focused on playing and being aggressive, they were able to put it all together. The team you saw at the end was the team that we normally are.”

On the other side of the net, LL-H head coach Mandy Perreault said mistakes let a Lakes’ win slip away.

“We absolutely shot ourselves in the foot with our errors,” she said. “Hitting errors, untimely service errors and other stupid mistakes cost us the game. Our heads just were not in the game after the first two sets.”

Novascone said Thursday’s victory meant a lot to her and her team because she couldn’t recall when the last time her Cardinals had won against the Lakes.

“This is a team that has beaten us every time in the past,” she said. “We are the top two teams in the (Copper) conference and I knew that it would be a battle. After the first set, I was losing home. By the end of the second, I had gotten a little (hope) back and then after we won the third set, I thought we could make a run of this.”

In the third set, the Cardinals move out to a 6-2 lead and just kept rolling. At one point they led 15-3.

“We were finally able to get a lead and stay there,” Novascone said. “That was the difference.”

In the last three sets, the Cardinals outscored the Lakes 65-40.

“Also key for us was the defensive play of Emma Augestein,” Novescone said. “She came out timid in the first set and let a lot of balls drop. But once that changed and she started to pick up balls from their hitters, the whole ball game changed. Sometimes the defensive plays create more momentum than the offensive plays, and I think that’s what occurred here tonight.”

For the Lakes, senior Joslynn Perala led the offense with 10 kills and six aces. Senior Jamie Hendrickson had eight kills and three aces.

Perreault agreed there was a big swing in momentum as the third set progressed.

“I don’t know what happened, “ she said. “I think our girls Wakefield was just going to hand them the win, and they didn’t. Wakefield wanted the win way more than we did. They had more fire in them.”

ALSO: L’Anse swept Baraga in three sets on Thursday by scores of 25-19, 25-19 and 25-20. Alayna Waara led the Purple Hornets with seven kills. Addison Mattson had six kills and Brynn VanBuren had 20 assists. L’Anse plays in the Forest Park Invite on Saturday.