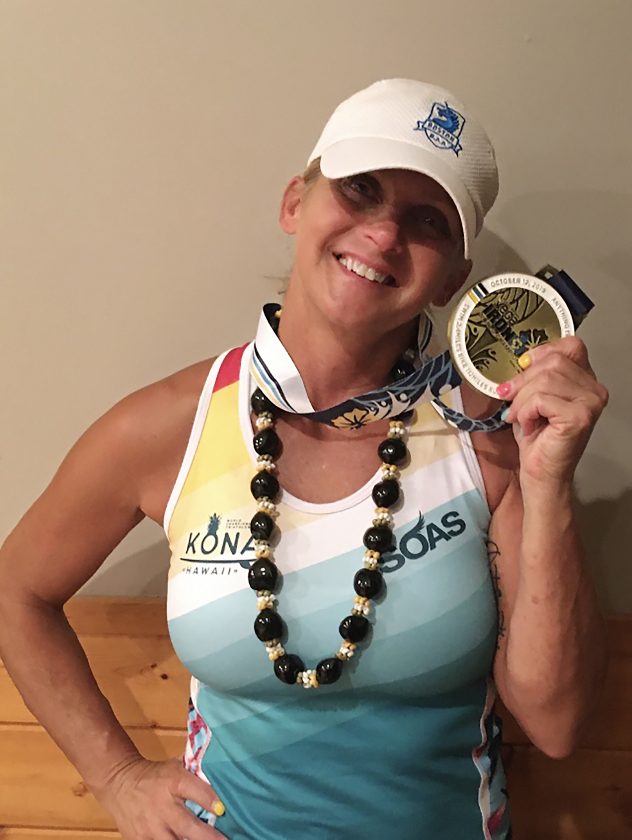 Laurie Smith, of Atlantic Mine, poses after completing the Ironman World Championships on Oct. 11 in Kona, Hawaii. (Laurie Smith/Courtesy Photo)

ATLANTIC MINE — While it has been close to two weeks since Laurie Smith crossed the finish line at the Ironman World Championships in Kona, Hawaii, the memories of that day are ones that will last a lifetime.

“The whole trip from start to finish was more than I could ever hope for,” said the 53-year old Atlantic Mine native. “It was awesome.”

The Iron Man is a premier triathlon event. It consists of a 2.4-mile swim, a 112-mile bicycle ride and a marathon 26.2- mile run, raced in that order. The championship one Smith competed in in Hawaii is an invite-only race. She had to earn her way there by wining an Ironman sanctioned event earlier in the year. She earned her ticket in July when she placed first in Ironman Lake Placid, New York for her age division (women, ages 50-54).

Smith was one of just around 2,200 racers from around the globe to participate in this elite triathlon on Oct. 12. She said it is the only sporting event in the world where qualified professionals compete right next to amateurs such as herself.

“We all head out together and you really earn your medal on this course,” she said.

First came the swim. It was the first time that Smith had swum in salt water, but she had more than a week to prepare and get ready for the ocean environment.

“The swim was no problem for me, Smith said. “Others had a lot of problems with the ocean swim and were adding a lot of time to their normal pace but not me.”

She said she will never forget the training swims she had with dolphins and the every colorful fish in the rainbow.

After getting out of the water, she hopped on her bike. This was the worse event of the day due to high winds.

“I have never ridden in that type of cross wind,” she said. “For more than 45 miles you had to hold on for dear life and pray that you didn’t get blown over. By the time I got off the bike, a marathon never looked better.”

She explained that when she settled into the run, she was able to find a steady pace and stick with it. It also helped that she found a running buddy from Texas who kept pace with her for around 17 miles.

“She was an angel,” said Smith with a smile. “We were able to feed off each other and help each other to keep pace. We both had similar goals of finishing the race in under 13 hours.”

“When I knew I was getting close (to finishing), I started to cry for a mile, and then I could hear the finish line, she said. “For the last two mile there are fans that line the course, and they rooted me on.”

Smith said she also found a lot of encouragement from the local area. Thanks to social media, her phone was flooded with well wishers and hometown support. She was even receiving cards sent to her hotel where she was staying in Hawaii before the race from nieces, nephews and grandchildren.

“I felt all this support from the Copper Country,” she said. “It was incredible.”

Back home now for more than a week, Smith said she’s already received a lot of inquires about what’s next.

“They want to know how am I going to top the Iron Man Championships,” she said.

No worries. She’s got it all figured out.

“I need to do my 40th marathon — when and where, I don’t know yet,” she said. “I’m registered for the Mighty Mac (4-mile swim across the Straits of Mackinac) and a half-Iron Man. Then its on to a full Iron Man in Louisville next October. People think I’m crazy. But this is what I enjoy.”