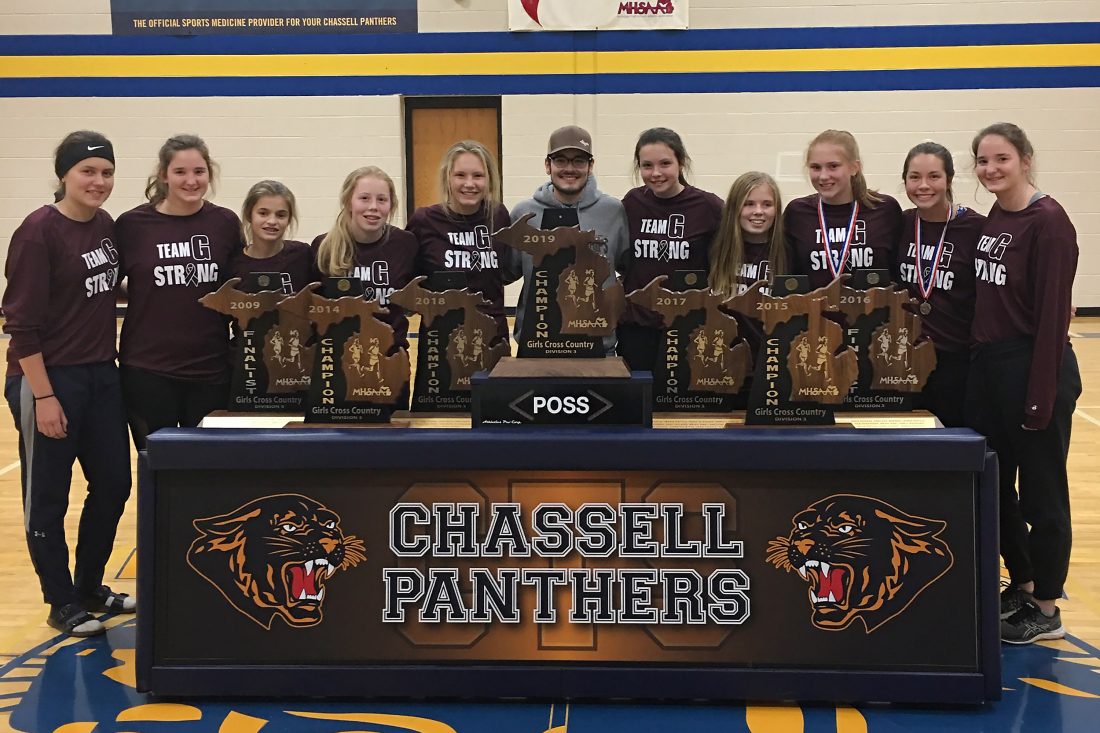 CHASSELL — When the Chassell girl’s cross country running team bested the 18-team field in the Upper Peninsula Championships Division 3 race on Saturday, they extended a run of excellence that is rarely equaled in any division.

The Panthers have now won five of the last six Division 3 girl’s U.P. cross country titles and head coach Marco Guidotti has built his program to this level from the ground up.

Guidotti, a 2006 Hancock Central High School grad and Northern Michigan University alum, came to the Chassell school as a social studies teacher in 2012. In 2013 he got involved as a co-coach to restart the cross country team after a two-year hiatus despite having no prior distance running or track and field experience as a coach or an athlete.

The Panthers took a year to acclimate back to the sport, but were quickly successful in 2014 with their first U.P. crown of this era. Since then they have ripped off a string of first-place team finishes until now, save a runner-up finish to Cedarville in 2016. This year’s trophy completes a current three-peat for Chassell with a plan to return all athletes for 2020 since the team had no seniors this fall.

Guidotti played prep football and baseball, following up his high school career competing on the diamond in the Copper Country Twilight League until about four years ago when he hung up his cleats. But he knew he wanted to coach at the secondary school level even though he took a job at a small district that doesn’t offer the sports he was most familiar with.

“I’ve always just loved sports, so when I figured out I wanted to become a teacher in college, I also was hoping for coaching opportunities to come along,” Guidotti said. “When I got hired at Chassell, they needed to fill some coaching spots and I just was looking for another way to connect with the kids beyond the classroom.”

Guidotti took over cross country, for the boys and the girls, and also has coached track at Chassell over the last seven years, yielding the spring season to Michelle Miller last year. Miller also is currently assisting Guidotti with cross country.

“We had enough (runners) for a (full varsity) boys team, my first year coaching,” Guidotti said, “but everyone was kind of new to cross country (since it) wasn’t a sport in Chassell for a couple years before we started it up again in 2013. So, everyone was kind of starting fresh, we had some guys and girls that year who liked running, but didn’t really know how to push themselves and really what this sport was all about. So we all kind of started together … but we only had two girls that first year so we didn’t even have a team score (minimum five finishers) at that first U.P. Finals that we went to.”

In order to get up to speed, Guidotti put in time to research training methods and now has his teams maxing out at about 30 miles per week in mid-season. “(Starting from scratch) I utilized some close resources that I had, some former track coaches at the school,” Guidotti remembered, “and I had some help my first year. … Other than that (for resources); books, online, and just kind of trial and error, you know. I definitely did not consider myself a fitness professional when I started nor do I still, but just getting a baseline (at first) for what to do and what not to do. In terms of practice and the results in some of those early meets … I made adjustments from there.”

But program building goes far beyond training philosophies and practice plans, the X’s and O’s of distance running. Taking a running program from nothing to a locally elite level requires effective internal recruiting.

“There’s been some hard, hard sells, for sure,” Guidotti said of his in- and out-of-class sales pitches. “You know we’ve had a few people over the years, girls and boys, that say ‘I can’t run three miles.’ And then they come out and start slow.

“We always say, start where you’re at and build on that, and progress each day. And when they see that they actually can better themselves and see even a little bit of progress. We’ve seen that carry forth (with retention). But yeah, it’s just some hard convincing. And then their peers help too. We have a really strong system of support so I think when they see that they’re not going to be ridiculed and when they’re only going to be supported by their teammates that really helps.”

Guidotti is thankful for his own support system as well.

“A huge thank you to my wife and kids for really picking up the slack while I’m away (coaching),” he said. “And then also just (thank you) to the entire community of Chassell, who help us and support us along the way. All of the teachers, administration, booster club, so many people. The team and I view this as something that we’re all in this together and it would not work without the support of the entire community.”