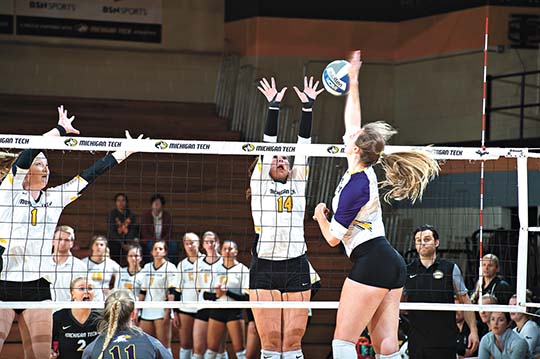 (David Archambeau/For the Gazette) Michigan Tech’s Olivia Ghormley (14) and Emilia Widen (1) jump to attempt to block an attack from an Ashland hitter during a match Saturday in Houghton. Megan Utlak (2) readies in case the block fails.

HOUGHTON — The Michigan Tech Huskies women’s volleyball team had a goal in mind, contain the visiting Ashland Eagles’ potent offense led by senior middle Sophie Cudworth and redshirt junior outside Brooke Peiffer. The pair combined to score 37 of their team’s 56 points. While that number seems high, it was not enough to overcome a match-high 23 kills by the Huskies’ junior outside hitter Olivia Ghormley, who nearly single-handedly took over the third and fourth sets of the Huskies’ four-set victory, 25-20, 15-25, 25-20, 25-14, over the Eagles Saturday at the Wood Gym.

Ghormley, who scored 16 of her 23 kills in the match’s final two sets, felt the team get their collective feet moving in those last two sets.

“I think we realized that we weren’t playing our best ball the second and we knew that we had to take care of business, you know, and that next set and the fourth set as well,” she said. “We just knew that we had to come out with fire and come out and play every point like it’s our last.”

Ghormley is quickly working her way into becoming a five or six-rotation player for the Huskies, and her serving in the third set gave the Huskies a further two points as she racked up a team-high two aces as well. She also finished without a hitting error in the match.

“Her serving has been a big part of our serving strategy. She’s been serving tough. She’ll drop a short one in there every so often.”

In order for Ghormley to find the time and space necessary to bust the match open, she needed help, which she got from the efforts of senior middles Rachel Ping and Emilia Widen. The pair helped create one-on-one situations for Ghormley, which she could then attack from the left side consistently.

“I definitely think having the middles open up that court for me was insane. I mean, I had a one-on-one almost every single time, so I definitely give a shout out to Emilia and Ping for that.”

Ping finished with 10 kills and Widen had seven.

After the Huskies (13-4 overall, 8-1 GLIAC) won the first set, they found themselves unable to push the pace of the match in the second set, which allowed the Eagles (15-4 overall, 7-2 GLIAC) to take control and up with a strong win in the set.

Jennings sat his girls down between sets and discussed what the team would need to do in the third if they wanted to take back control. It all started with defense.

On the defensive side of the ball, junior libero Megan Utlak finished with 23 digs, 13 of which came in the final two sets. Sophomore defensive specialist Grace Novotny added 12 of her own, including seven in the final set.

“It was all defense in that third set,” Jennings said. “We came out, we challenged them in the locker room in between. We knew that we had to make more stops on defense and that allowed our offense to keep going in transition.

“We are really fast and transition. Our middles did a really good job getting up and being an option in transition, gave Olivia lots of one-on-ones at the pin as we saw tonight. Laura did a great job finding her and the rest of our attackers. Defense lead us to some more offensive opportunities.”

Jennings feels that Widen and Ping both possess the type of speed that creates mismatches for Ghormley and the other outside hitters.

“They’re fast in transition,” he said. “When we control the ball in serve receive and on defense, and those who get up fast, that’s what you see. They just do they do a really good job of being an option for Laura. In our three hitters set, we are even more able to spread it out.”

Junior outside hitter Anna Jonynas also benefited from the time and space afforded her as she racked up eight kills with no hitting errors.

The Huskies needed a pair of strong matches after a tough loss last Saturday against Ferris State in straight sets. Winning six of seven sets this past weekend gives them momentum moving forward.

“After that Ferris game, as a team, we kind of did some self reflection and looked at that Ferris game, and we weren’t very happy with the effort we put out in that one,” said Jennings. “I couldn’t be more proud of the way we responded, not just on the weekend, but all week in practice.

“We had a really good week of practice. The girls really dug in and committed to being more intense and more deliberate and playing with more intent. I thought we did that here this weekend.”

The Huskies return to the floor this weekend as they travel to Indianapolis to take part in the Midwest Region Crossover at the Academy Volleyball Club.