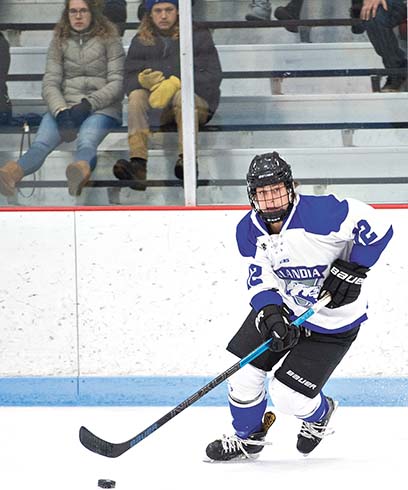 (David Archambeau/For the Gazette) Finlandia’s Teddy Randell controls the puck in the neutral zone during a game last season in Hancock.

HANCOCK — Just one year ago, the Finlandia Lions men’s hockey team stood at a crossroads. Would they finally turn a corner or would they would they remain irrelevant in the NCHA?

It took 60 minutes on Oct. 27 for fans and community members to find an answer as the Lion stunned Wisconsin-River Falls on the road, 3-1. The Lions won seven more times last season, including a 1-0 win over then-No. 5 Wisconsin-Eau Claire and a stretch in January where they went 5-1-1.

“You could see the process, it obviously takes time as we talk about all the time,” said Lions coach Joe Burcar. “It’s not an overnight thing, it’s a matter of time. It’s a matter of putting pieces together and bringing in certain recruits. It’s becoming a good mixture.”

The Lions clinched a berth in the Harris Cup playoffs and a road series at St. Norbert, who defeated them 2-1 and 9-0 to sweep the series.

Despite the losses, the season was, on the whole, a victory for Burcar’s squad.

“Last year was a huge step in the right direction of what we’ve been building towards,” he said. “Now that we’ve added tastes of it, especially for our players, you want more.

The process of bringing in local players has helped. Last season, the Lions had six local players and three more from the state of Michigan, including two who had relatives locally.

“We talked about locals all time and we definitely went after the locals,” Burcar said. “Our coaching staff, we’re always going to go after a local kid and you sprinkle in guys that we feel will fit into our program.”

Now, the Lions have the unenviable task of not just repeating that effort, but of trying to add to it. Even with the success of the 2018-19 season, Burcar feels his group is still flying under the radar a bit, which is just fine by him.

During their stretch run, things started to fall into place for the Lions. Cale Markham was a big part of that. The then-sophomore scored a team-high 10 goals last season, including a hat trick against St. Scholastica at the Houghton County Arena.

“He’s got a great set of wheels,” Burcar said of Markham. “He’s got a quick release. I think for the longest time he was trying to make a play, rather than shoot the puck. Credit to him, he’s not a selfish guy, but at the same time, we were asking him to shoot.”

Markham, freshman Tyler Watungwa and senior Paul Lochner combined to give the Lions a second scoring line last season. Markham and Watungwa return for Burcar this season, giving the Lions the building blocks they need for depth in scoring this season.

Also back for the Lions are sophomore winger Teddy Randell and senior Connor Hannon, who was recently named team captain.

Randell had five goals and 16 points as a freshman and provides some sand paper for the Lions.

“He’s got natural ability, he really does,” said Burcar. “He had an amazing high school career, a kid that didn’t move on to juniors, he chose to come in here.

“I think he’s a kid that pushed himself. He wasn’t sure how he would do without playing juniors because he’s looking next to his teammates and linemates and everybody’s older and played a lot of games at a higher level. I think he pushed himself last year, and I think going into this year, it’s going to be a challenge for him, that he’s not under the radar.”

Hannon will be tasked with a different role this season for the Lions. Last season, he did everything that the coaching staff asked of him. This year, along with being a leader, Burcar and his staff are going to start the season with him on defense alongside sophomores Dylan Paavola and Cory Richardson. The trio will form the foundation of an improved back end for Burcar’s squad.

“They’re young, but, at the same time, they’re guys that lead by example,” said Burcar of Paavola and Richardson. “Dylan, I have probably known him a little bit longer than Cory. Dylan just been a guy that played for Team CC, played for Hancock, took Hancock to a state championship.

“Corey, I followed through his coach in Colorado. Knowing both of them and their background and their demeanor, off the ice both are great students here. They both were just showing leadership capabilities as freshmen last year. It’s not hard to see leadership qualities. They’ve accepted that and they want a bigger role. They want to be part of that leadership group.”

Finlandia lost Hunter and Dawson Kero in the offseason as the pair transferred for school reasons. Burcar hopes that freshman Tyler Vanuden can be one of the players who steps in and fills some of the gaps left behind.

“He had a brief moment the BCHL and his game is a lot like Hunter’s,” said Burcar. “He’s not as big as Hunter, but just the smarts of the game, the anticipation of what’s going on understanding the game. He’s almost like a coach on the ice. He really understands and he’s asking questions all the time he thinks the game, he knows the game. He’s got a lot of junior experience under his belt.”

Behind the Lions, juniors Marcus Gloss and Santeri Seppaenen are back. The pair will be challenged by freshman Ben Kelsch, giving Burcar options on any given night. All three will likely see the net at various points this season, but Gloss will get the early nod.

“He understands the game so well,” Burcar said about Gloss. He knows if we need a whistle. He knows how to slow it down on a on a line change. He communicates with the team and he’ll do a little things to give us a breather at times. He just has a great feel for the game.”

In Seppaenen, the Lions were not sure exactly what they had at first, but once he settled in, he proved very capable, including in a 5-3 loss to Adrian late in the season where he made 29 saves.

The Lions open this season on the road at Wisconsin-River Falls, this time for a two-game series. The Falcons will be looking to avenge last season’s loss. The Lions then come home to open their NCHA schedule with Aurora before heading back on the road for consecutive road trips at Adrian and Lawrence.

Finlandia will host Hamline in a rare Tuesday afternoon tilt on Dec. 3 before hosting Milwaukee School of Engineering on the weekend. They will close out the first half of their season on the road at Lake Forest.

When they return to action on Jan. 3 and 4 in Concordia (Wisconsin), they will be on the first of back-to-back road trips. They then finish with five of their final eight contests in the friendly confines of the Houghton County Arena.