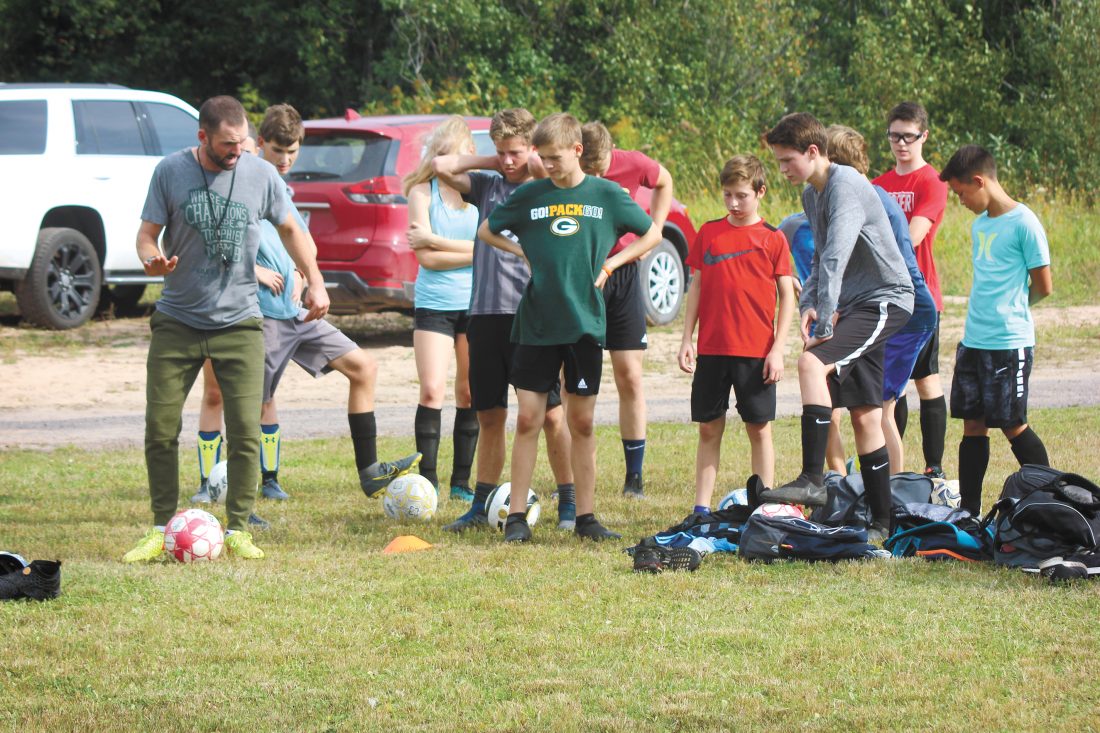 HOUGHTON — When Matt Meyers took on the head coaching position for the new Houghton High School Soccer Cub, he wasn’t sure what he was getting into.

“My soccer career ended in middle school,” he said with a smile. “I was a football player in high school. I love the game, and I found it strange that there were no high school teams here in the Keweenaw.”

Meyers, a Green Bay, Wisconsin native, came to the Houghton school district in 2015, as the eighth-grade physical education and health teacher.

However, what he did find locally was a huge interest in the sport of soccer by way of the Copper Country Soccer Association. According to CCSA president Matt Kelly, the organization routinely has around 700 participants in their recreational leagues each summer. That would include kids as young as five and six-years old all the way up through 12th grade playing around a 12-game schedule.

With that in mind, Meyers along with some CCSA leaders and interested parents approached the Houghton school board about forming a club team and the soccer Gremlins were born.

“It has been about two years in the making,” Meyers said. “So far, things have been going very well.”

In fact, the club is undefeated. They defeated the Copper Country Christian School 6-0 in their first and only game earlier in September. They have had other games scheduled but canceled much to the disappointment of Meyers and squad.

As a club team, the soccer Gremlins do not participate as an official, Michigan, high school sport. Instead, Meyers and his crew have had to organize games on their own with school’s such as Ironwood, Negaunee and Iron Mountain. They have around 30 players in their co-ed club which includes a junior varsity squad as well. They have been on the turf at Alumni Field and on the grass at Hurontown working hard since mid-August.

It’s been a dream come true for three Houghton seniors: Soham Mehehdale Hunter Bishop and Caleb Sanders. These three have grown up playing together in the CCSA and have wanted to play throughout the year and at a more competitive level.

“We had head rumblings of a team starting here at Houghton for a number of years, but nothing ever came of it,” Bishop said. “This year though it has really happened.”

They have nothing but nice things to say about their coach and what he has taught them.

“He changed the way we think about the game,” Sanders said. “It’s much more organized than rec soccer. There is a method to the madness.”

Bishop added, “We are playing much more as a team.”

Meyers explained that his own lack of soccer experience on the field has never been a real issue between him and his players. It was something he worried about before he met his team.

“I was honest with the kids from the start that I hadn’t played much organized soccer,” he said. “But I told them I knew a lot about the game and have a real passion for it.”

The players, he said, really respected his honesty, and he and his team have since been on a journey together learning the game of high-school soccer.

“In one sense, I think it created somewhat of a level playing field for all of us,” he said.

Meyers said that in terms of putting together practices and drills, he has drawn a lot from his years as a physical education teacher.

“There are some principles that are universal to sports,” he said.

He recently took an online soccer course from the U.S. Soccer Learning Center over the summer that he said has helped him immensely in his teaching of the game.

“The kids have been great,” he said. “We are playing so much better as a team. It has been exciting to witness these players turning into some very talented athletes.”

He explained that the next step for the club would be for it to be a sanctioned sport at Houghton.

“Obviously we want to become an official varsity team, but that will come with time and we will have show the school that we have the interest and can sustain a team year-in and year-out. “ he said. “If we could get an official team here, that could spark interest elsewhere in the Keweenaw. That would be great.”