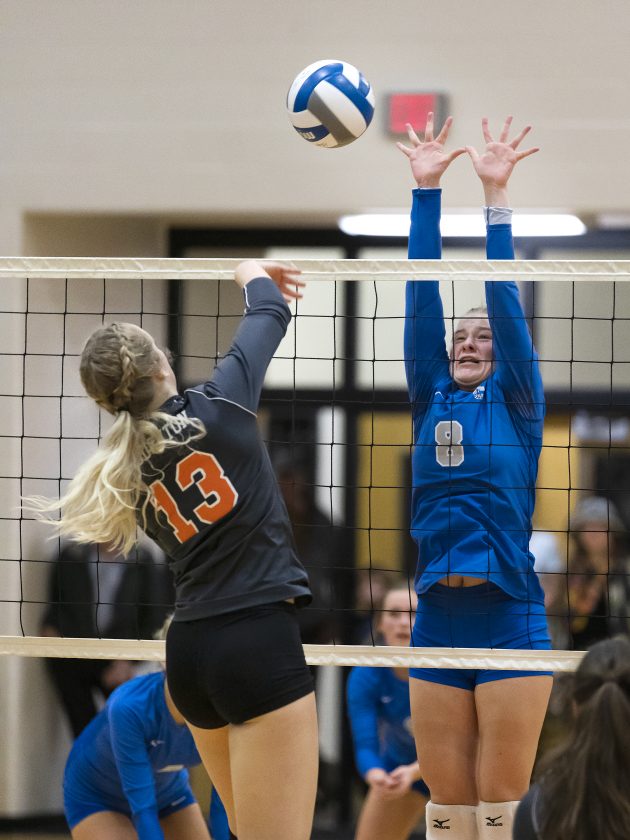 HOUGHTON — It didn’t take long for Calumet to set the tone en route to a 3-0 sweep of Houghton on Tuesday.

“We switched our lineup to get our tougher servers serving more often,” Calumet head coach Matt Laho said. “Then we’re talking more about where we place it and what’s tougher for the passer.”

“The first game we started strong. We were running everything we practiced and what we wanted to run,” Laho said. “We were getting a lot of good swings and good serves. I think in the second game we got a little too easy to read. We started going to the same spot too many times in a row. Then I think we balanced it a little more in the first.”

Laho said his team has responded well to the challenges he’s put on them.

“I put a lot of pressure on these girls. I have a lot of respect for them because I push them hard and they just keep wanting more,” Laho said. “They keep grinding it out. They want to be pushed, so I think every win, it’s like we’ve still got things to work on. We’ve still got stuff to do and get better at. When we show up to practice tomorrow, we’ll talk a little bit about tonight and things we did well. Then we’ll start grinding on things we need to fix.”

“I’d say they’re more diverse as far as we have a more dynamic attack across the board,” Laho said. “The front row, our defenders, they all play pretty good defense in the back. They all pass and serve pretty well. They’re all tough servers. Overall across the board we’re deeper than we’ve ever been.”

Calumet plays at the Brighton Invite on Saturday. The Copper Kings close the season on Oct. 29, hosting Hancock.

There’s still small things the team has to work on, Laho said.

“Just consistency with where we place the ball so our hitters can get a little more rhythm, some of our passes, defense,” he said. “There’s a long list, but I think for the most part it’s stuff we’ve been working on that we’ve slowly been getting better at. It’s all really fine little stuff. There’s no big glaring holes on this team. It’s just fixing the little things to squeak out a few extra points here and there.”