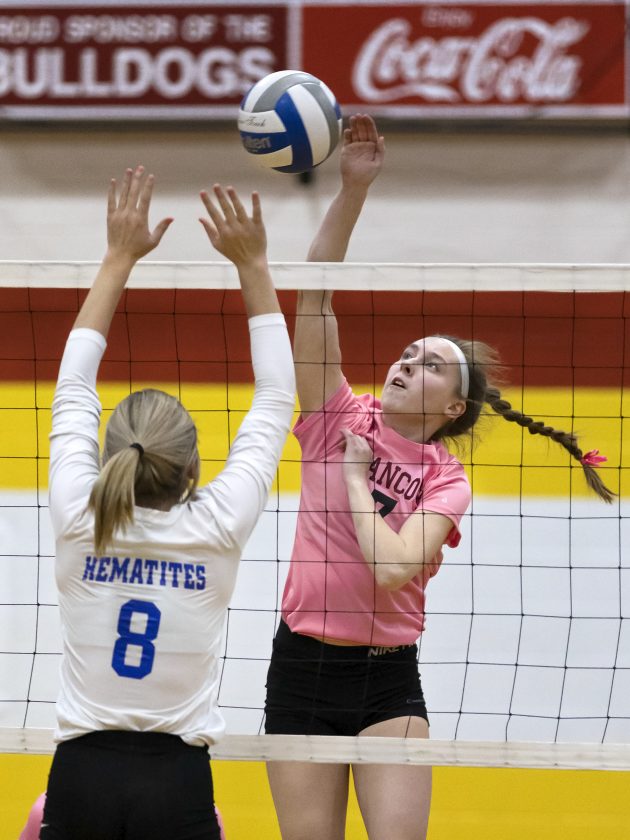 HANCOCK — Hancock made quick work of Ishpeming with a 3-0 sweep on Thursday.

The Bulldogs pulled off their second straight sweep after doing the same to Westwood on Tuesday.

“I think this boosted our confidence and let us get into a bit of a routine and find a rhythm,” Hancock head coach Elle Heinonen said.

The Bulldogs battled point for point with Ishpeming fr most of the first set until Hancock broke an 11-all tie and staked a five-point lead for a while, before ending the set with a 10-point win.

“Recently we’ve made a few switches in our lineups and I think that’s ramped up the competitiveness that’s on our team,” Heinonen said. “And then also just kind of let the girls get into a flow with the lineup that’s out there. It’s a good time to play good at the end of the season.”

Ishpeming played Hancock point for point to start the second set, but defensive lapses put the Bulldogs in the driver’s seat. Hancock took a four-point lead after a 7-all tie. Ishpeming took a timeout, but Hancock went on to outscore the Hematites 9-1. Hancock finished out the set with a 25-16 win.

“I thought tonight we played well at times, but we let them get too many runs in a row,” Ishpeming head coach Katt Beerling said. “That eliminated our chances of being successful. I think that we should’ve showed up to play more than we did tonight. We were playing as individuals instead of as a team. Our communication and energy could have been better. We have a tournament on Saturday, so I’m really looking forward to a good day tomorrow with the girls and show everybody that we’re ready.”

D’Andra Kero led Hancock with 19 digs and 10 kills. Laura Fenton had 12 digs. Payton Dube and Alexandra Huotari both had 10 digs. Huotari had 14 assists.

“To win in three, I think that was big. We got everybody in too,” Heinonen said. “We won with our two different lineups that we’ve been going back and forth. I think winning in three and then winning with everybody is really big. I think it shows the depth that we have right now.”

Ishpeming’s team is at a much different state at this point of the season.

“Honestly right now the thing with our team is just not meshing well at times,” Beerling said. “We’re there and we want to win and we play hard but at times we just fall flat. I think that tomorrow we’re just going to work on becoming a team and focus on working together.”

Hancock and Ishpeming play in the West PAC tournament Saturday at Westwood High School in Ishpeming.