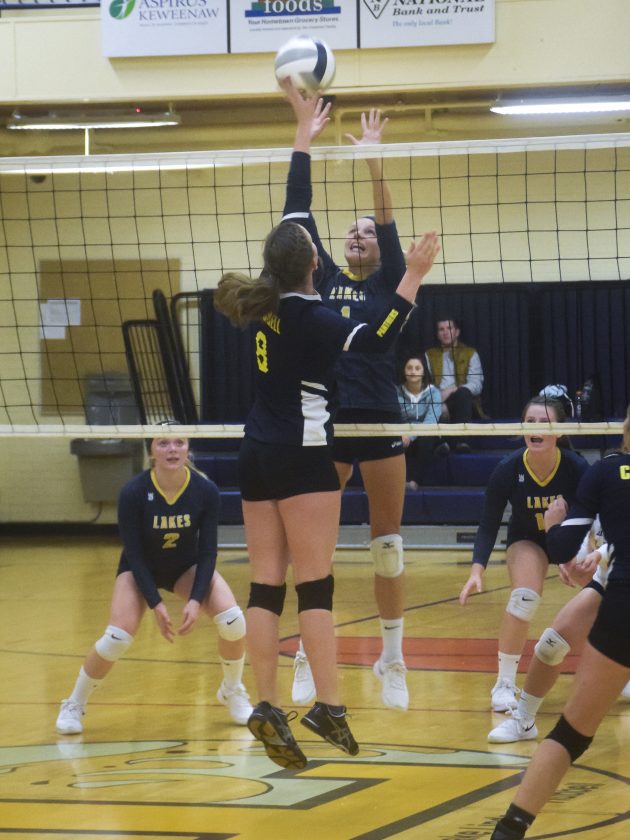 For much of the night, it was a back-and-forth battle between the two squads that saw a number of ties and quite a few lead changes.

While she was pleased with the win, LL-H head coach Mandy Perreault said she wished her team was more consistent n their play.

“My girls like to give me a heart attack,” she said with a smile. “We need to work on consistency. We will have a couple of bad plays and then this negative snowball starts that turns into five, six or seven lost points. It’s a mental thing, and it’s something we struggle with a lot.”

They struggled to get thing going in the first set as Chassell came out on top with a 10-7 lead. However the Lakes were able to come back and tie it at 13. Then senior Alyssa Burton put up some strong serves including an ace and the Lakes were able to take a 16-14 lead. That increased to a 24-20 lead and eventually into a 25-21 win.

The second set belonged to the Panthers, but they had to fight tooth and nail for it. The score was tied at nine, 10 and 11 before the Panthers were able to pull out with a lead and never look back. It was the only set Chassell would win at 25-20

“We have these mental lapses and we then we get down,” added Perreault “These girls know how to play but we seem to lose focus or momentum too many times. It is a hump we need to get over.

The Lakes(6-2) were able to get over it in the third set as they marched out to a 13-2 lead. Hendrickson was hard to beat at the service line. She led the Lakes with six aces on the night.

Down 2-1, Chassell wasn’t going down easy. They mounted a number of leads in the fourth set but never put the set away as LL-H persevered to a 27-25 win.

“I thought we kept swinging really well tonight,” Perreault said. “We were able to fee the ball to Joslynn Perala and she was able to put the ball down.”

Perala had 11 kills and Burton had nine.

Perreault added that she was also please with the play of her libero Kaitlyn Baccus who had 14 digs and a lot of other crucial saves.

“She is so quick and she reads the other team very well,” noted Perreault. “A lot of tips and short balls did not fall because of her. She is such a smart player.”

Now roughly at the mid-way point in the volleyball season, Perreault said she is pleased with the progress her girls have made but there is still work to be take place.

“We are at a point where some fine tuning needs to be done and a lot of that relates to our mental game,” she said.