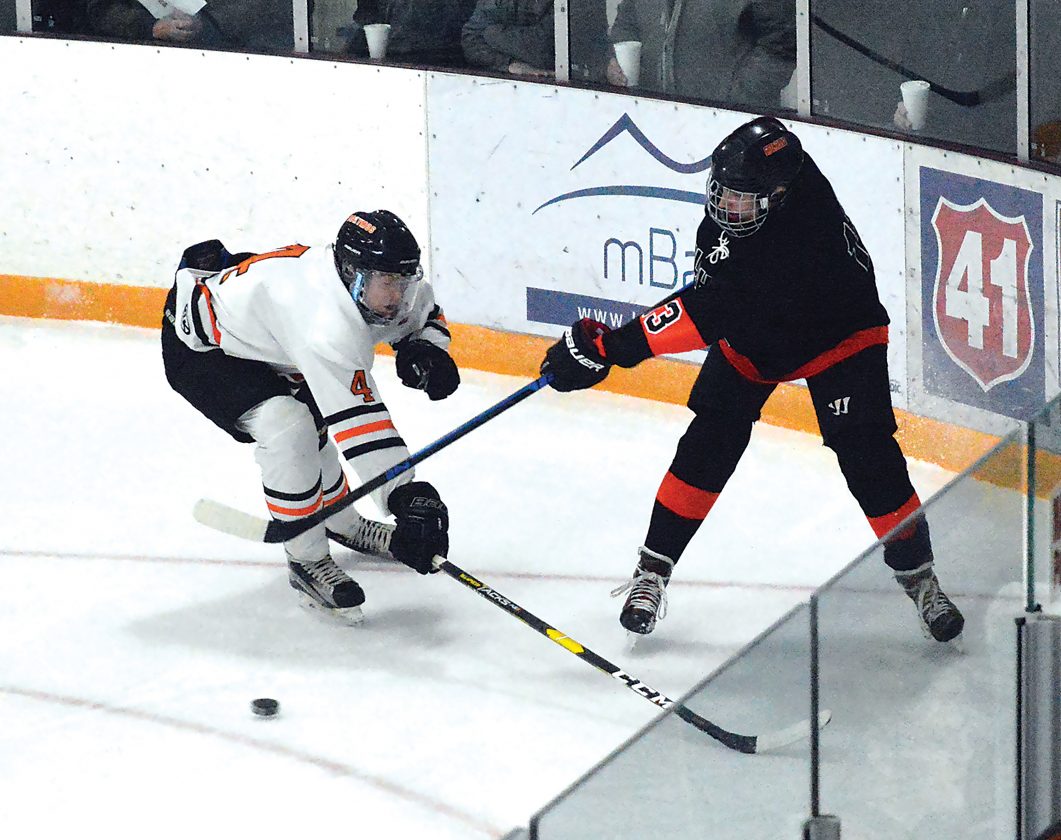 WELLS — Facing a Division 3 state finalist from a year ago, the Escanaba hockey team knew it was in for a challenge against Houghton.

The Eskymos didn’t do themselves any favors, committing nine penalties in a 4-0 shutout loss to the Gremlins in their home opener at Wells Sports Complex Friday night.

The Eskymos (1-1), who committed three penalties in each period, managed to bend without breaking in the first despite being outshot 12-4.

However, that type of play wouldn’t cut it the rest of the way, as Houghton (1-0) scored three times in the second to take a commanding 3-0 lead in this Great Lakes Hockey Conference tilt.

“It’s hard to win a game when you’re spending most of your time in the box, you’re defending the defensive zone to control it, and you can’t get it out. It’s tough,” said Esky assistant coach Pat Labre, who spent his second straight game as head coach with Matt Hughes gone on a family vacation. “Emotions got into it. They got carried away with their high stick, interference and not paying attention to the play. You have to be able to get through adversity.”

The first Gremlins’ goal came on a flip shot from the doorstep by Ty Halonen at the 1:31 mark of the second period. Just over two minutes later, Tucker Tapani scored on a breakaway for a shorthanded goal to make it 2-0. Brandon Trudeau added one more second period score with his first career high school goal in a 5-on-3 situation to give the Gremlins a 3-0 advantage with just under three minutes left.

Milo Schaefer then capped the scoring with his first career high school goal on a breakaway in a 4-on-4 situation at the 9:52 mark of the third period.

“The scoring was spread out good and we had two kids score their first high school goals, so that was nice to see,” Gremlins’ coach Corey Markham said. “We’re breaking in a few new kids, and they had good first high school games. We have a ways to go, but it was a good first step and I look forward to seeing continued success on our team.”

One area the Gremlins struggled was on the power play, going just 1-for-9. Escanaba was 0-for-4.

“We had quite a few power play opportunities, but I was quite a bit disappointed in our power play and our execution. It was really sloppy, and that’s something we have a lot of work to do on yet,” Markham said. “I can’t fault our effort. I thought we gave up very few quality chances on defense, so that was great, getting a shutout was great… I just thought we were sloppy executing and passing, and those types of things we need to really improve.”

The Eskymos, who were playing on the second night of a back-to-back after winning at Kingsford in their season opener Thursday, were outshot 31-10. Senior goalie Trevor Denome was a bright spot, making 27 saves. Jimmy Pietila stopped all 10 shots he faced for Houghton.

“If it wasn’t for our goalie, we wouldn’t have been in it at all. It would have been a whole different story,” Labre said. “Defensively, we played pretty good. We made some minor mistakes as normal, but we’re a young team. We’ll get through it.”

The Gremlins host Marquette in their home opener Tuesday, while the Eskymos visit Marquette Dec. 3.