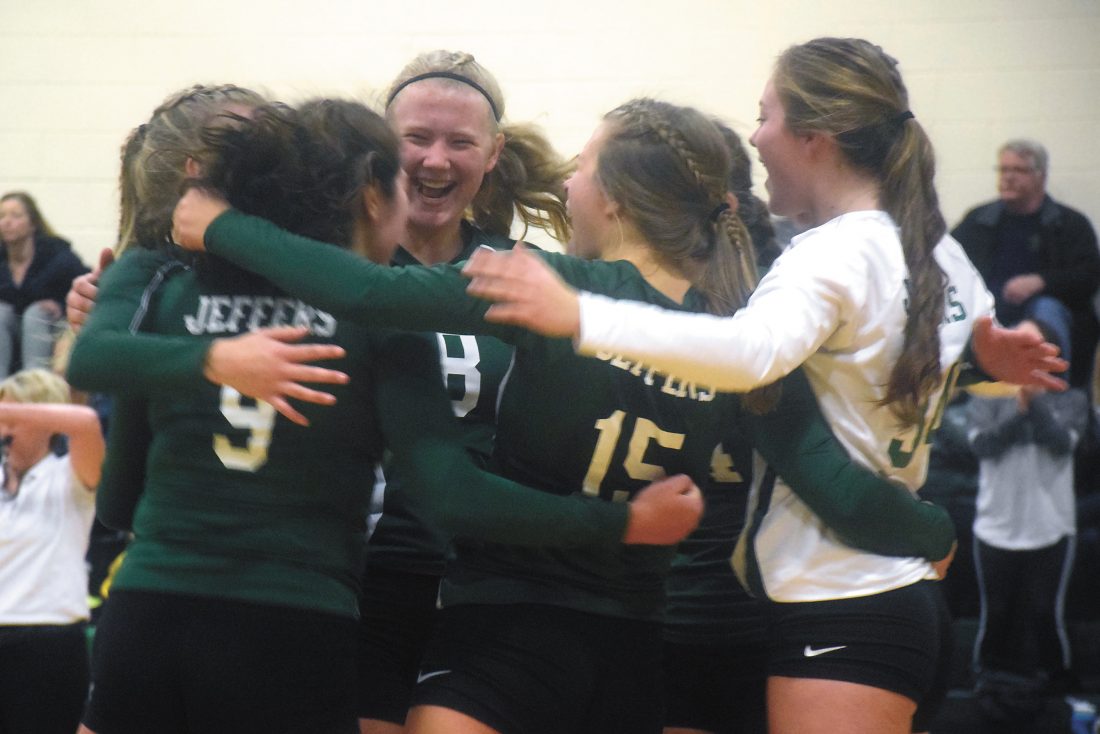 PAINESDALE — Rachel Torp knew she and her Jets had their hands full with the Lake Linden-Hubbell Lakes coming to town for the Division 4 District 98 semifinal.

This cross-canal rivalry had a long history, and it was a lopsided one. In short, the head coach of the Jets couldn’t recall the last time Jeffers beat LL-H in volleyball.

Wednesday reset her memory as Jeffers rallied from a two-set deficit to win 3-2 and advance to the district championship at Chassell at 7 p.m. Friday. Chassell swept Dollar Bay 3-0 in the other semifinal.

LL-H took a 2-0 lead on Wednesday night. It looked like it would be another well-played game for the Jets, but ultimately another win in the books for the Lakes, and the Jets’ season over. However things slowly changed on the Jeffers’ home court as the third set rolled around.

“I told the girls before that set that they had to get their serves in, and that they needed to play smart,” Torp said. “We had to get it to our setter and get it over the net and let them make the mistakes.”

In the third set, the Jets jumped out to a early lead and kept the momentum going. Midway through they led 12-10 before pulling away to a seven-point victory. They were lighter on their feet and made the plays when they needed to be made.

“We rallied back and we played smarter,” Torp said.

A rowdy Jeffers crowd certainly helped the girls keep things going in the fourth set as they commanded a two- to four-point lead throughout. Junior Kenna Harris led the charge with eight kills on the night. Senior Marissa Nordstrom had six blocks at the net. Senior Lilly Turner had 11 digs. After a big swing, a stop at the net or a diving save on the floor, the momentum on the court and in the stands just got stronger and pushed the Jets to a fifth and deciding set.

“The girls knew that that they had to play as a team and that is what they did,” Torp said.

Lake Linden head coach Mandy Perreault noted the shift in the momentum of the game as well.

“Plain and simple, Jeffers wanted it more than we did,” she said. “When it came down to the wire, we got tentative and stopped swinging and they started swinging harder. We knew Jeffers wanted to beat us more than anything and we didn’t respond the way we needed to.”

While it was not the way she expected her team to go out, Perreault said she was proud of the way her team grew over the season.

“I’m proud of improvements the girls made and how they stepped into new roles without hesitation,” she said. “They did well with the cards they were dealt.”