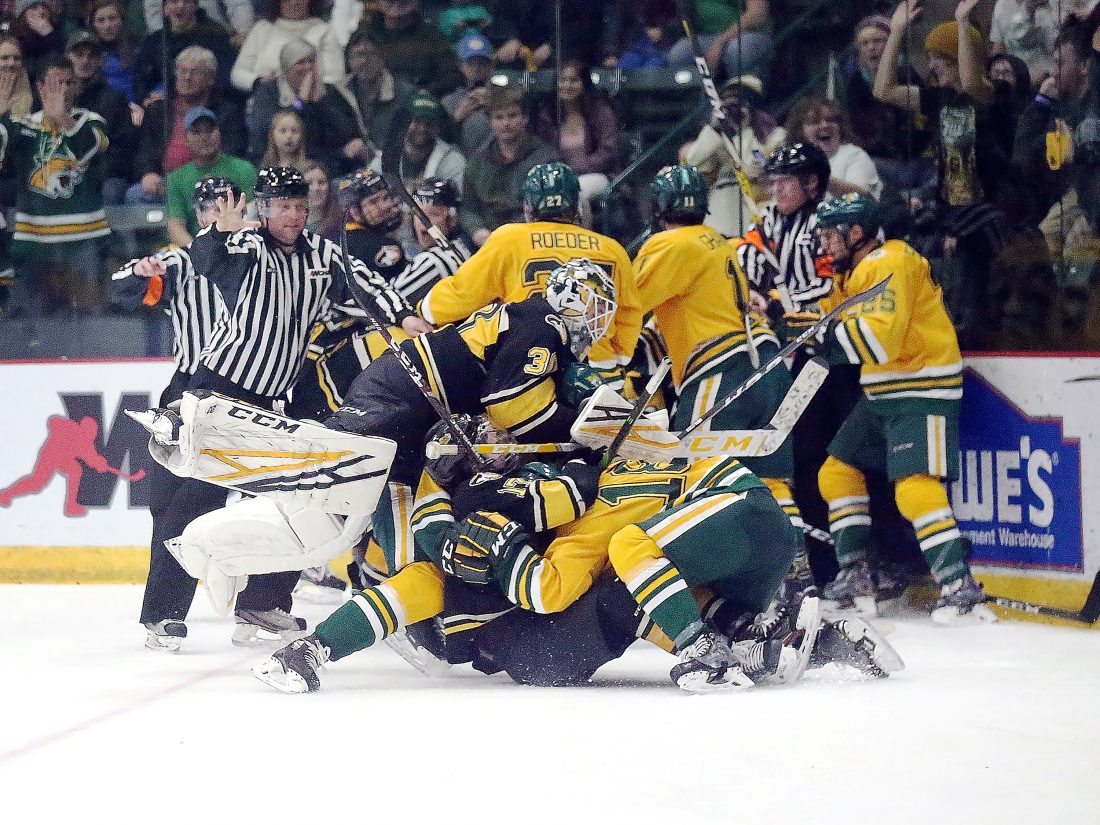 MARQUETTE — Michigan Tech took a lead and held back a late push by No. 19 Northern Michigan for a 3-2 win and a series sweep on Saturday.

The Huskies (7-6, 5-5 WCHA) took a 3-0 lead in the second period before the Wildcats rallied with two goals in the third.

Matt Jurusik was instrumental in the sweep, capping the weekend with 33 saves in Saturday’s win. He made 24 saves in Friday’s 3-2 win in Houghton.

“He’s tremendous. He’s been on a hot streak,” MTU head coach Joe Shawhan said. “He’s been our stabilizer. That’s the difference in both games. If you don’t have goaltending, it goes the other way for sure. You have to have it in order to beat 18th-, 19th-ranked teams in the nation.”

Northern (7-5-2, 5-3) pulled Nolan Kent with about a minute left for the extra attacker and pushed for the tying goal. Then a line brawl erupted with a second remaining in the game. Jurusik even got involved.

“It was a 6-on-5. When it’s 6-on-5 and there’s a scrum, you kind of know as a goalie that there’s a 2-on-1 on one of your guys and then I saw, I don’t know who it was on our team, stuck between two guys,” Jurusik said. “I just went in there and took the other guy off and got into it a little bit. That’s what happens when it’s a rivalry.”

Jurusik is the only Huskies goalie this season to have at least 30 saves in a game — Saturday was his third such game.

Three weeks ago, he didn’t even travel with the team to North Dakota to face the Fighting Hawks in the US Hockey Hall of Fame game.

“I was a goaltender, I did this before. I left him home, and he wasn’t happy,” Shawhan said of Jurusik. “I told him ‘I’ve done this before. I want you to get dialed in. Our intent is to play you in the game next weekend. Get dialed in.’ I think he wanted to show me, ‘don’t ever leave me home ever again from a trip.’ He’s been absolutely on fire ever since.”

Huskies captain Ray Brice struck first with his first goal of the season two minutes into the game. Streaking down the left side into Northern’s zone, Brice looked to pass it across to TJ Polglaze as he cut to the net. The puck deflected off a Northern defender and past NMU freshman goaltender John Hawthorne.

The Huskies added two goals in the second period to pad the lead and quiet the crowd. Alec Broetzman took a pass from Parker Saretsky and snuck it under the crossbar six minutes into the period. The goal was his fifth of the season and was also assisted by Greyson Reitmeier.

Seven minutes after Broetzman’s goal, Eric Gotz scored his second of the season when he got to open space in front of the net and wristed it past Hawthorne for a 3-0 lead. Logan Pietila and Brian Halonen assisted the goal.

Potulny put Nolan Kent in for Hawthorne after Gotz’s goal. Hawthorne had 14 saves on 17 shots.

Northern Michigan sustained some more pressure for 10 minutes of the second period, sustaining more offense and getting more odd-man breaks and second-chance opportunities. But Jurusik was strong throughout for Michigan Tech, making 13 saves in the period, with some coming through traffic and in close.

After Friday’s loss in which the Wildcats had seven penalties, they followed with two more in the first period Saturday. While the Huskies didn’t score a goal on either power play, they kept momentum, and the puck, in the Wildcats’ zone.

“For three minutes last night, when we got penalties, and for maybe five or six minutes in the first period, I didn’t think we played great,” Northern Michigan head coach Grant Potulny said. “The rest of that time was as good as we could play. I thought the penalties were very, very lopsided and that’s very disappointing. It’s hard when you’re in the box a lot. It’s a challenge. Their goaltender, that’s as good of a two-game segment as any goalie whose played against us. Maybe any goalie I’ve played back-to-back nights against. Going back to (Wade) Dubielewicz that played for Denver, which means nobody to anybody, but (back) when I was a player. That’s how long it’s been since I’ve seen a kid play that good.”

During the four-game win streak, Jurusik has a .942 save percentage and 1.75 goals-against average.

Jurusik said he didn’t do anything different during the three games Robbie Beydoun and one game Blake Pietila started in goal.

From Brice’s goal on, the Huskies’ momentum carried them through as the Wildcats struggled to sustain any offensive pressure, at least until the third period. The Wildcats managed 10 shots in the first period, but rarely had a possession in which they had more than one shot on goal.

“I said to the guys that I’m disappointed for them,” he said. “I’m disappointed and you hurt. It almost has the feel of the last game of the year because they care. They really do. But two games in November doesn’t define a team. It’s almost like you have to have a couple of these before you can come out of whatever funk you’re in. Both nights, if you would’ve told me we would’ve played the way we played both nights, I would’ve signed up for it every day, all day. Their goalie played great.”

The Huskies visit Alaska next weekend in a bid to extend the win streak.