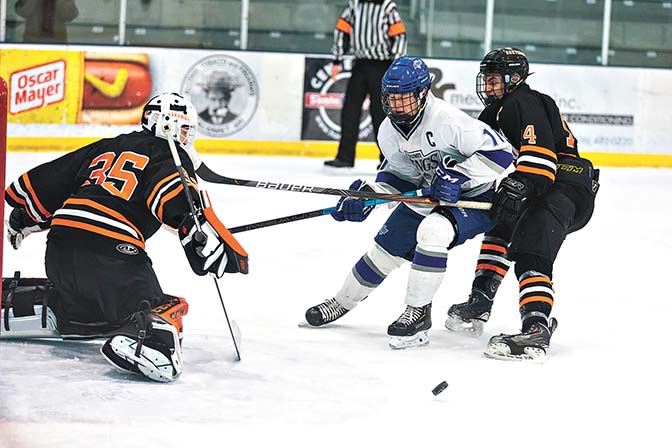 CALUMET — The Calumet Copper Kings hockey team made short order of the Escanaba Eskymos in more ways than one on the ice Saturday afternoon at the Calumet Colosseum.

First, they scored four goals in less than six minutes to open the game. They did not stop there. They closed the first period with a fifth goal and put three more in during the second period to end the game with the mercy rule after two periods, 8-0.

“There is a reason Calumet is ranked No. 1 in D3 hockey,” said Escanaba head coach Matt Hughes. “They work extremely hard, and they showed that today.”

This was the second time these two teams had met this week. Calumet (14-1-1) won the Tuesday night contest, 5-2, against the Eskymos (8-9) in Escanaba, so they wanted to make sure they won by a more convincing fashion Saturday.

Copper Kings winger Tanner Rowe got the scoring parade rolling at the 1:36 mark with a wrist shot in front of the net. Scott Loukus followed suit less than two minutes later to make the score 2-0. Forty-five seconds later Tanner Rowe added a third. Forward Dean Loukus made in 4-0 at the 5:38 mark as he found the back of the met. 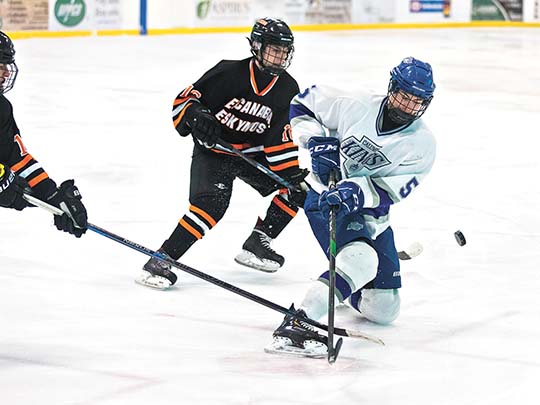 A shot by Calumet's Tanner Rowe (5) is deflected by an Escanaba defender on Saturday, Jan. 25, 2020, in Calumet, Mich. (Adam Niemi/The Daily Mining Gazette)

Points were flowing generously for the Copper Kings both as a team and as players.

The Copper Kings out shot the Eskymos 36-8.

While Hughes knew his team had their work cut out in facing one of the best teams in the state, he had hoped they would have stepped up and faced the challenge a little better.

“We came out flat and we were intimidated,” he said. “This (Calumet Colosseum) is a tough place to play in, and everyone knows that. However, our guys did not give 100%.”

On the other side, Giachino likes what he is seeing in his players. With little less than a month to go in the regular season, he is pleased with where his team is at.

“We’re getting better each week,” he said. “Today our puck movement was quick and it was tape to tape and that is an improvement. We are playing strong defensively. “

Calumet will face Negaunee on Tuesday.