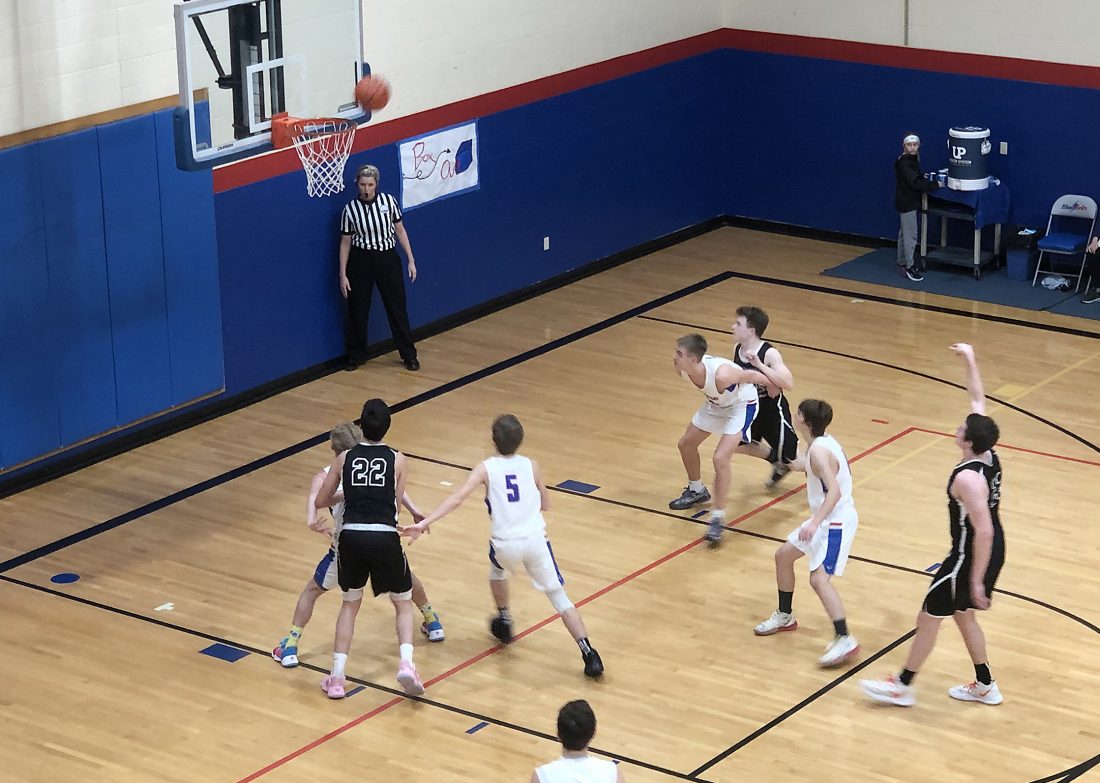 Dollar Bay and Houghton battle for a rebound on Brad Simonsen's free throw on Friday, Jan. 17, 2020, in Dollar Bay. (Ryan Towles/For the Gazette)

It was the second time in as many nights the Blue Bolts (8-0) took out larger non-conference neighbors. Dollar Bay beat Hancock on Thursday.

The Bolts dispatched the Gremlins (5-4) Friday without trailing.

DB continued to have balanced offensive output at the top of their lineup, with the Bolts Big-3 of senior Ashton Janke, and juniors Davin Hill and Connor LeClaire all reaching double figures against Houghton.

It was LeClaire’s turn to lead the way, scoring 23 points. Hill contributed 18 and Janke had 19.

Junior Pablo Salgado scored a game-high 24 for the Gremlins, with most of the other Houghton damage being done by senior Brad Simonsen, who scored 20 points.

“Pablo was fantastic,” said Houghton head coach Jared Lawson. “He has a way of finding those seams in the defense (where) you don’t think those gaps are there. Next thing you know, Pablo is squeezing in there, which is really impressive.”

Both teams started out the contest with great energy, with the Bolts fueled by a raucous home crowd of Dollar Bay faithful. Houghton had a good contingent of fans also and the atmosphere was electric. Perhaps too much so as both sides got key players into early foul trouble.

“(Dollar Bay is) a fun place to play basketball because of the crowd,” said the Bolts skipper, Jesse Kentala. “We were a little keyed up (and) a little wired and we had to settle in.”

The Gremlins picked up four calls in the first 1:50 of play, but got under control so that the bonus was not a big first-half factor. Janke had to hit the DB bench late in the first quarter with two personals and Houghton’s Simonsen picked up his third foul into the second quarter, losing minutes for the rest of the first half.

The Gremlins cut into Dollar Bay leads several times, getting to within four or five points. But each time it seemed the Gremlins might surge to even things up, DB-TC was able to shut the door with timely buckets and almost immediately get the margin back to nine points after each threat.

When asked how his team is able to respond to being challenged on a regular basis, Kentala responded by saying, “Sharing the ball. When we share the ball we’re a really good team.

“Our fourth and fifth guys, I don’t know if they get a lot of respect from other teams, but they can score. And we know they can score, and tonight they did. I’m really proud. When we play like a team, we’re fun to watch.”

Birthday boy and DB sophomore AJ Datto opened the scoring with a 3-pointer, foreshadowing efficent long-range shooting for the Bolts, who made 7 triples in the first half and 10 for the entire game.

“We made a lot of 3-pointers and I told the guys I am thankful they can shoot and score,” Kentala said. “Because the defensive side of the ball still needs work.”

“We just had too many turnovers,” Lawson said.

Gremlin senior Will Romano hit a three with under 10 seconds left in the quarter and again the Gremlins found themselves within four points after three quarters.

But the Bolts eventually built a 12-point advantage — mostly with steals and rebounds — with about 2:45 remaining, the Bolts went into ball-control mode and ran out the clock.