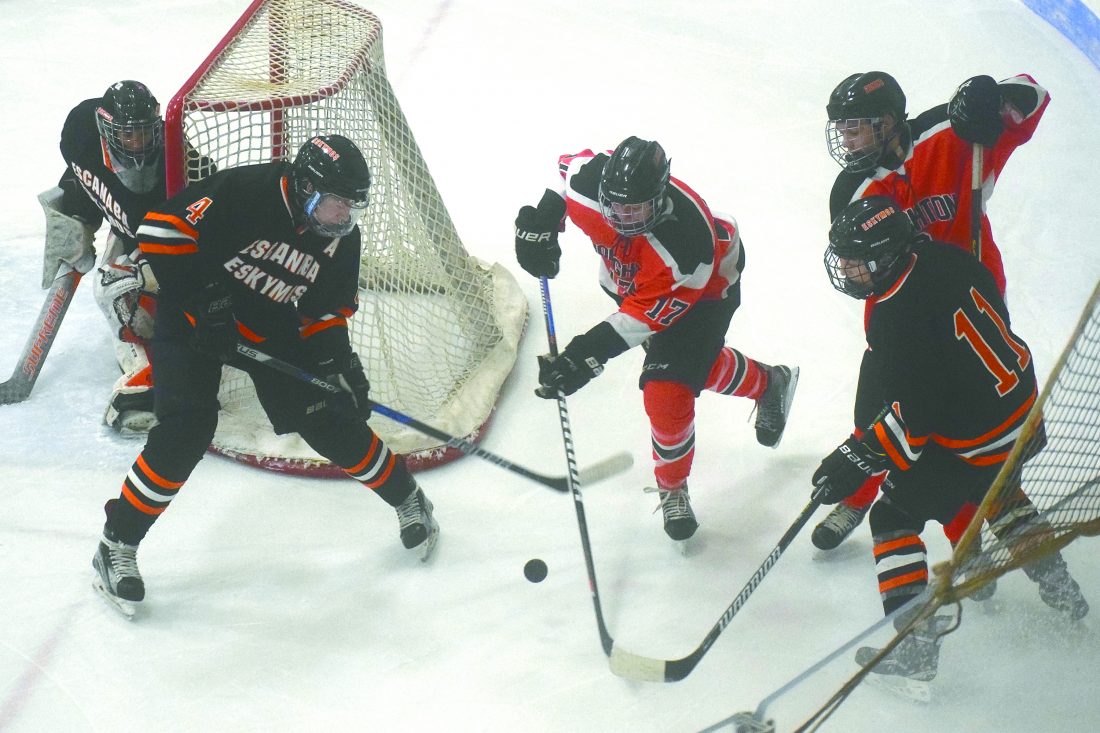 HOUGHTON — Friday night at the Dee was the second time the Houghton Gremlins and the Escanaba Eskymos had met on the ice this year, and the outcome was just about the same from when they first faced off.

“Houghton is a fast team who played one step ahead of us the whole game,” said Eskymos head coach Matt Hughes. “They have a lot of speed and their fore check is strong which forced a lot of turnovers.”

Just minutes into the game the Eskymos had two man in the penalty box for holding. Despite the 5-on-3 man advantage, the Gremlins could not find the net. It would take less than a minute after both teams returned to even strength for the Gremlins to get n the scoreboard. It was at the 12:36 mark that freshman forward Camden Markham found a loose puck in front of the net and pushed it past the Eskymos net minder Trevor Denome for a 1-0 Houghton lead.

Escanaba however bounced right back to tie it at one with a power-play goal from Kyle Krutina less than two minutes later.

Houghton would have the final say in the first when forward Brandon Trudeau let one fly in the slot that sailed by Denome to make it 2-1 at the first intermission.

“I told the guys in between periods that we needed to generate some offense if we wanted to stay in this,” Hughes said. “We ended up chasing the puck the whole time. Unfortunately we didn’t. We just put four shots on goal in the second and two in the third. We are not going to win hockey game with such little shooting.”

Meanwhile the Gremlins peppered the Eskymos with 48 shots. Markham had another goal in the second and Ty Halonen scored goal number four in the third.

“We had a lot of great energy on the ice tonight,” said Houghton’s head coach Corey Markham. “Our forecheck was strong and I thought it was a real solid game for us. When you get effort like that, you are going to be a tough team to beat.”

He added that he was pleased on Friday with his freshman line of Markham, Gaborik Carlson and Sully Rajala. Markham had two goals and the other two played gave it their all according to their coach

“They generated a lot of energy out there and played hard,” he said. “They were our top line.”