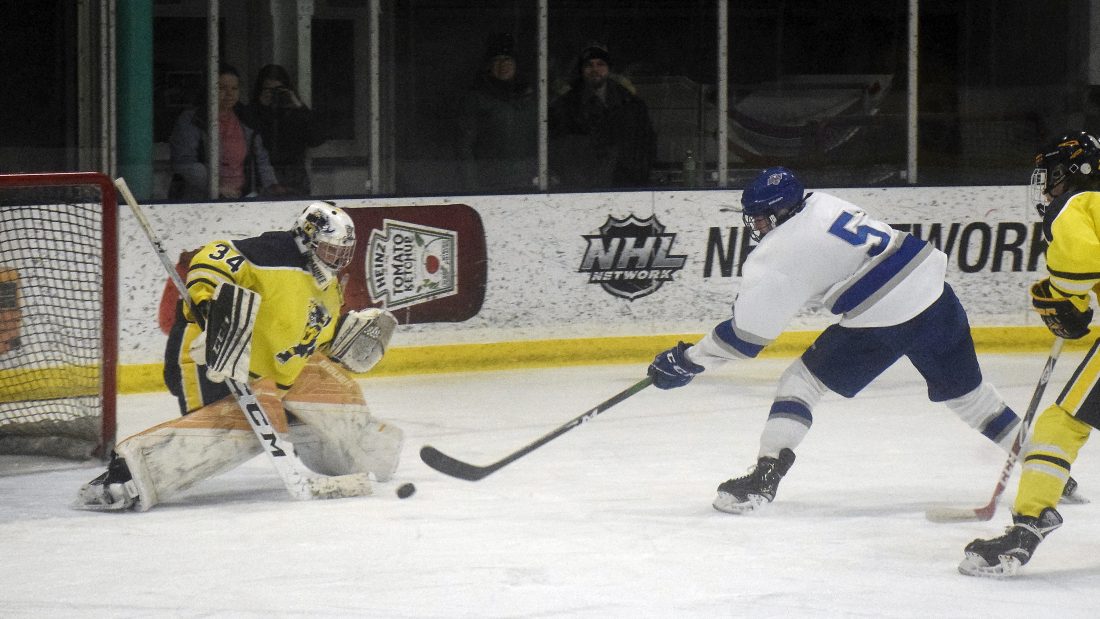 CALUMET — The Calumet Copper Kings just needed two periods to take care of the Negaunee Miners with a 10-0 win on Thursday.

After an eight-goal first period, they added two more in the second and the game ended at 10-0 due to the mercy rule.

It took the Copper just five minutes off the opening puck drop to take 3 -0 lead. Alex Mattila started things off at the 1:45 mark as he found the back of the net. Less than two minutes later defensman Nick Djerf got his first and a minute later forward Dean Loukus added the third.

It was the night of the defenseman for the Copper Kings as half their goals came from the back line.

Not only did Djerf score but so did seniors Cam Kauppinnen and Lincoln Beiring. Beiring had a hat trick, scoring his third goal of the night with just second remaining in the second.

“The back line was jumping up into play and had a lot shots on net and the pucks just seemed to go through,” said Copper Kings head coach Dan Giachino.

The Copper Kings outshot the Miners 43-3.

This was the second time these two teams met this season. There first meeting at the end of January in Negaunee had a similar outcome as the Copper Kings took care of that one 11-1.

Miner head coach Dale Hopper had hoped for a stronger showing from his team.

“The first period we didn’t show up to play,” he said. “The second we did a little better but it wasn’t nearly enough. We’re young with six freshmen and two sophomores. It is a growing year for us.”

The Loukus cousins racked up a lot of points of Thursday evening for Calumet. Junior forward Dean Loukus had an impressive eight points — seven assists and one goal. Senior forward Scott Loukus had six points, including two goals and four assists.

The Copper Kings have just three regular season games left. The big one is slated for this Saturday against Notre Dame, of Green Bay, who are a highly ranked team in Wisconsin. Then they face Houghton on Tuesday and Kingsford on Thursday.

“They will be three tough games to close out the season before we head into the playoffs,” Giachino said. “Hopefully they will keep preparing us and getting us better for the post season.”