Ordinances to be repealed, replaced 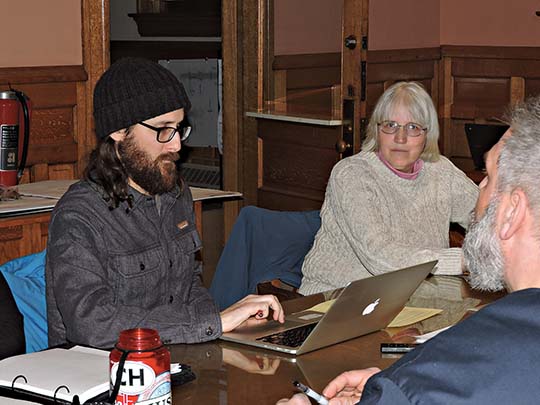 Graham Jaehnig/Daily Mining Gazette Village Council Trustee Andrew Ranville voted no on repealing the village’s two marijuana ordinances, while Trustee Roxanne King was very reluctant, but agreed with the majority that repealing them was necessary to amend them to be compliant with the zoning ordinance, while at the same time, updating the 1997 zoning ordinance to allow for establishments not considered when the ordinance was last addressed. King agreed with President Dave Geisler’s expressed intent that all of these actions be addressed and ready to move forward before late spring of this year.

CALUMET — The Village Council conducted a special meeting Thursday approved a motion to temporarily repeal both the medical and recreational marijuana ordinances, Ordinances 152 and 153. The motion included that the council works together with the Village Planning Commission and the Zoning Ordinance Committee to have amended ordinance drafts to present at the March 17 Village Council meeting.

Among the several reasons for the action were recommendations of the Village Planning Commission.

“The only two options the village has regarding these ordinances,” Planning Commission Chairwoman Colleen Kobe told the board, “are amend or repeal.”

The issues that were not resolved before the adoption of the ordinances cannot be resolved by amendments, said Kobe, so her opinion is they need to be repealed.

Her first reason, she said, is that there was no public hearing conducted at which village residents could voice their opinions on the ordinances.

“The Michigan Zoning and Enabling Act states that that has to happen,” she said. “Also, the Calumet Planning Commission never had an opportunity to review these ordinances before they were passed as well.”

Trustee Andrew Ranville argued that recreational marijuana usage has been adopted by the state, licensing is required, but marijuana sale would not be different from any other retail store or bar that would want to open. This has been the opinion of Trustee Roxanne King, also. The trouble, as Planning Commissioner Chris Green said at Tuesday’s commission meeting, is that the ordinances are not compatible with the zoning ordinance, something with which President Dave Geisler concurred.

The zoning ordinance, he pointed out, contains no language nor vocabulary for the permitting of marijuana establishments in the village.

The zoning ordinance, he said, is old, from 1997, and was written based on what people were aware of at that time.

“There was no anticipation at that time that there would be adult use marijuana,” he said. “I think the preferred way is to amend the zoning ordinance to allow such businesses.”

After much discussion, it was agreed among the council members that a public hearing was necessary, both to hear from residents on the issue, and to amend the zoning ordinance.

“We can have a joint public hearing to talk about whether we like marijuana (in the village) or not,” said King, “Which categories we like and which categories we don’t, and it’s reasonable to have it joint, because there are going to be questions.”

“My own opinion is,” said Geisler, “is we repeal, and by the March council meeting, we have drafts, then pass them in April.”

Simultaneously, he added, at the planning commission’s meeting, on Feb.12, they should start that process of looking through the zoning ordinance. Among the agenda items should be how they will amend the ordinance to allow for marijuana establishments, and where.

Geisler again emphasized he would like ordinance drafts presented at the March council meeting.

“I don’t think that is unrealistic,” he said. “It’s a full month from now.”

Geisler said, and the council agreed, the amendments, as well as a public hearing, need to occur soon. Trustee King said she would like to see everything in place before the summer tourism begins.

“I think the community has said, and the council has said, that they want adult use marijuana in this community,” Geisler said, “and so I think we have to honor that.”