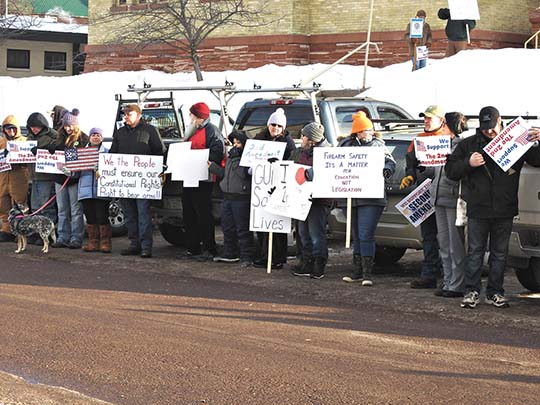 Garrett Neese/Daily Mining Gazette About 40 people demonstrated in support of a Second Amendment sanctuary bill prior to Houghton County Board meeting Tuesday. The board tabled the resolution and will revisit it over the next month.

HOUGHTON — The Houghton County Board of Commissioners tabled a resolution to declare the county a Second Amendment sanctuary county.

The issue also prompted a rally by about 40 residents in support of the resolution prior to Tuesday’s meeting. The movement asks counties to declare they will not enforce gun control laws they deem unconstitutional.

The non-binding resolutions have sprung up in more than 20 states. Around 10 counties in Michigan have passed similar resolutions, including Delta County. A number of others are considering or have passed modified versions endorsing constitutional rights.

“Right now, we see a lot of politicians who are trying to take away citizens’ rights, so I think it’s important that we have this measure in place just in case,” said Justin Kasieta, vice chairman of the Copper Country Republican Party, who brought the resolution to the board.

As with many of the resolutions, Michigan’s were prompted by gun control legislation introduced in the Virginia legislature. Those bills include limiting handgun purchases to one per month, allowing municipalities to restrict firearms during public events. 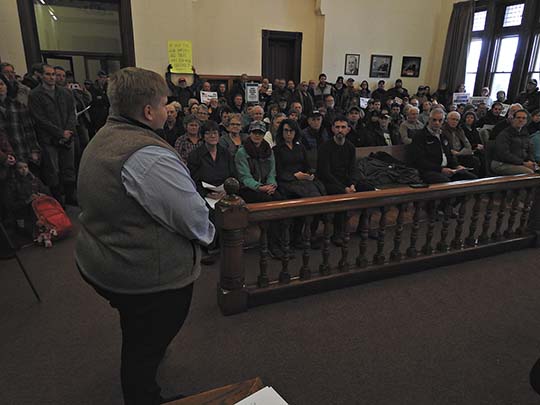 Garrett Neese/Daily Mining Gazette Justin Kasieta, who submitted a resolution for a Second Amendment sanctuary bill to the Houghton County Board, speaks in support of the bill during Tuesday’s meeting.

One of the most contentious has been “red flag” legislation, which allows authorities to apply for a risk order to temporarily bar someone judged to pose a “substantial risk” to themselves or others from buying or having a firearm. Such laws exist in 17 states, as well as Washington, D.C.

Similar bills proposed in Michigan last year were referred to committee in the House of Representatives.

Court rulings in Indiana, Connecticut and Florida found those states’ red-flag laws to be constitutional. Suits are pending in other states.

The sanctuary idea is modeled on communities that have limited police’s cooperation with the federal government on enforcement of federal immigration policies. The Department of Justice announced lawsuits against New Jersey and Washington’s King County this week.

Messages were left with the federal Department of Justice and state attorney general’s office seeking comment.

A bill recently introduced in the Michigan House in January would declare Michigan to be a Second Amendment sanctuary state. Rep. Greg Markkanen, R-Hancock, is among the 15 sponsors of the bill. It was referred to committee.

Houghton County Vice Chairman Tom Tikkanen said while the resolution might seem like an “illegal or rebellious act,” he thought it was a necessary step to guard against laws like Virginia’s which he feels violate gun owners’ Constitutional rights.

“The understanding that the government wants to eliminate or lessen that threat (of gun violence) is understandable,” he said. “However, in the cumbersome efforts many times with government issuing new laws, restrictive laws, they infringe on the rights of law-abiding, perfectly peaceful gun owners.”

Other commissioners expressed their support for the Second Amendment, but thought the resolution went too far or was unworkable.

Commission Roy Britz, a deputy chief for the Michigan Technological University police and former undersheriff for the county, said the board determines the budget for the prosecutor’s office and sheriff’s department, but should not dictate to them how laws should be enforced.

Commissioner Glenn Anderson agreed with Britz, and also objected to a clause in the resolution that would indicate the board’s support for “constitutional carry” legislation. Bills in the Michigan House would allow legal gun owners to carry open or concealed firearms without a permit.

“If you take constitutional carry, at least from what I read about, that would eliminate any review, and would potentially allow felons and other convictions to hold guns,” he said. “I personally can’t live with that.”

The commissioners’ packet included both Kasieta’s resolution and the one approved by Marquette County. Tikkanen argued for the motion to be tabled, saying he could not support the Marquette County version of the resolution.

“I think it should not be shoved off to the side,” he said. “We’ve got lots of people here who feel very strongly about it.”

Following suggestions by Chairman Al Koskela and Britz, the board will study the issue over the next month and also get a legal opinion on the resolutions.

Board members thanked the crowd for their passion. Tuesday’s meeting lasted nearly two hours, much of it devoted to comments on the sanctuary county issue.

Koskela surveyed the crowd to gauge their reaction. Thirty-nine people in the crowd were opposed to the resolution. He did not get a firm count of the people in support, but noted they made up a clear majority.

Houghton County resident Janeen Stephenson some regulation is necessary, pointing to a case several years ago where a Copper City man’s guns were confiscated after he made violent threats against Stephenson’s friend, a village employee.

“I don’t know if we understand if we passed one of these things, if our judges and our police officers would feel safe, because would we then have a right to say certain people are not safe with guns?” she said.

Houghton County resident Bill Manderfield backed the idea of a resolution in which the county backed Second Amendment protections.

Garrett Neese/Daily Mining Gazette Justin Kasieta, who submitted a resolution for a Second Amendment sanctuary bill to the Houghton County Board, speaks in support of the bill during Tuesday’s meeting.

Garrett Neese/Daily Mining Gazette About 40 people demonstrated in support of a Second Amendment sanctuary bill prior to Houghton County Board meeting Tuesday. The board tabled the resolution and will revisit it over the next month.

Image provided by the CCCAC The event features live auctions of gourmet deserts donated by local bakers and businesses, as well as a silent auction of pieces crafted by local artists. Here, Blayd Lewandowski of KC Bonkers displays a desert up for auction at last year’s event.

Image provided by the CCCAC The 15th annual Parade of Confections auction is set to take place in the Finnish American Heritage Center in Hancock. The event is a fundraiser for the Copper Country Community Arts Center but has outgrown that venue. Shown at right is auctioneer Brad Baltensperger during the 2019 auction. The Daily Mining Gazette’s own Joshua Vissers is in the middle of the room.