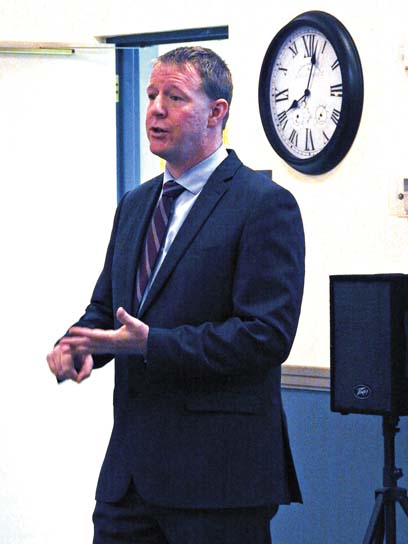 HOUGHTON — Keweenaw Chamber of Commerce members reviewed the past year’s accomplishments, and treated them to a preview of something to come, at the Chamber’s annual breakfast meeting Tuesday at the Bluffs.

Board president Brian Donnelly updated members on several initiatives. One launched this year is the Lunch & Learn series, which included 11 luncheons this month on topics relevant to small businesses. Digital marketing, online safety and maker spaces have been among past topics.

“This is your Chamber of Commerce,” he said. “Don’t leave it up to us to choose what you’d like to learn about.”

•Business After Hours, where businesses can showcase themselves.

•Training session on emergency management preparedness in the workplace, attended by more than 100 people.

“When’s the last time a sitting governor came up to talk to us about business in the Copper Country?” he said.

New businesses were celebrated with seven ribbon-cuttings this year. In June, the Chamber also celebrated William Hodge Day, in honor of the philanthropist who left a large amount of money.

After the Father’s Day flood, the chamber partnered with the Portage Health Foundation for the Still Strong Bluegrass Benefit Concert, which raised $14,000 for flood victim relief.

Whitney Warstler, president for the Chamber, presented upcoming events. They include a gingerbread-making workshop (using graham crackers) on Dec. 15 at the Jutila Center.

Leadership Keweenaw, last done in 2016, will be revived for next year. The course will include leadership in the community and personally.

The Chamber will also take on a bigger role in BridgeFest next year, Warstler said.

“Bridgefest is just a celebration of the community, and we think the chamber is a good organization to help with that,” she said.