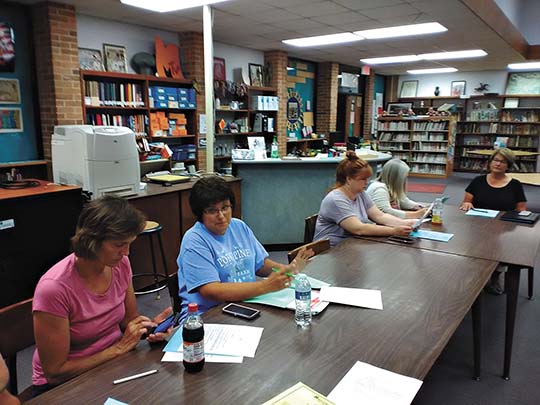 Skip Schulz/For the Gazette The Ontonagon School Board went over the upcoming year food and dairy contracts and took a proactive approach toward student nutrition at this week’s school board meeting.

Food and students’ nutrition were the main topics of this past Monday’s Ontonagon Area School Board meeting.

From the Elementary to the High School student handbook to a National Education policy (NEOLA Policy), changes were directed at student nutrition. Superintendent James Bobula talked about the calorie consumption and reducing sugar and non-nutritious intake as some of the changes in the district’s handbook and the NEOLA policy.

As has been for a number of years, the board unanimously supported all of Bobula’s recommendations, including accepting the bid from Twin City Dairy for dairy products for the upcoming school year. The bid has a slight increase of 2 cents per pint for milk. Bimbo Bakeries was awarded the contract for bakery items at 5 cent per loaf per package increase.

Those were the only bids the district received.

“The OASD will continue to offer free breakfast to all students,” said Bobula. “I am also looking into the possibility of providing free lunch to students. It’s a ‘stretch’ on getting the free lunch, but I’m looking into it.”

In a cost-saving venture, Bobula received an informational packet from Northland Electric pertaining to saving the school district money on the changing over to LED lighting. Bobula stated that the expense of retro-fitting the current fixtures over to LED would see a payback on the investment in two years, “however the long term savings is what we should look at.”

Bobula and board members Julie Kolpack and Karen Jackson also talked about the benefit to the students’ vision in reading and working under LED lights.

As has been the practice for years, Business Director Linda Karttunen clarified the increases in district costs on any financial matter brought before the board. This included the opening of bids for wood chips. The district uses wood chips to heat the buildings.

“For the last two years we have only received bids from a local contractor since the other provider went out of business,” said Bobula. “That contractor is Norm Pestka Construction. We’re looking outside the box and hoping that our current provider can continue to provide the chips.”

Karttunen informed the board that the district went through 782 tons of wood chips last year.

Bids for wood chips are to be turned into the school’s business office by 2 p.m. this coming Aug. 14.

The board agreed to two contracts with the Gogebic-Ontonagon Community Action Agency (GOCAA). One was to provide transportation to and from school for students in the head start program. GOCAA will be charged $60 per student. Twelve students used the transportation this past year.

The other contract was to lease the head start classroom to the GOCAA for $6800 per year.

The istrict also agreed to lease the bus garage from the Village of Ontonagon at $250 per month. This is retroactive to this past November.

Bobula gave a report on the restroom renovation, and the roof projects. He also reported on the inspection on playground equipment, and that Mr. Uotilla will continue to hold morning gym hours from 9-11 a.m. on Mondays, Wednesdays, and Fridays.

Bobula told the board he will be attending the upcoming Upper Peninsula Administrative Council meeting, which will feature discussion on special education.

The board approved paying the motel room fee’s for the school’s robotics team in their competition in Duluth. OASD continues to have vacancies for the JV and varsity volleyball coach, assistant fgootball, and JV boys’ basketball.

The district gave kudos and thanks to Kim Funke of Wright-Weber Management out of Appleton, Wisconsin. They donated paper to the district.

“We can use that paper for special education,” said Karttunen.