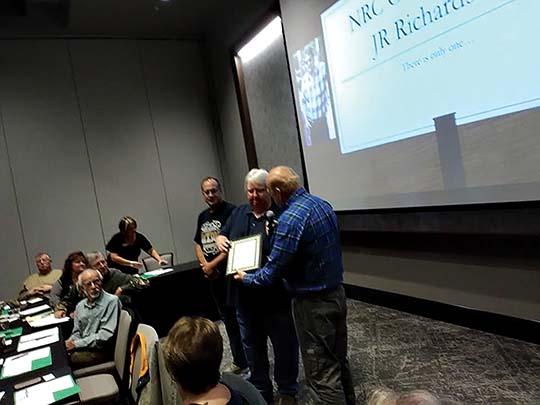 (Skip Schulz/For the Gazette) Ontonagon’s J.R. Richardson was recently honored by the DNR’s Western and Eastern UP Citizens Advisory Councils for his years of service on the state.s Natural Resources Commission.

Richardson, an Ontonagon native, was one of the only Ontonagon County residents to ever serve as chairman of the State of Michigan Natural Resources Commission (NRC). Before serving as Chair of the governor-appointed council, he was a NRC Board Member.

At past Western UP Citizens Advisory Council (WUP-CAC) meetings, the DNR-appointed council pushed for the NRC to have a representative from the U.P.

Many of the council members stated at the presentation of a plaque to Richardson that they were happy just to have him on the NRC, much less be the chair.

The joint meeting of the two Citizens Advisory Councils was held at the Northern Michigan University Student Center. The meeting was held the day before the NRC held the one meeting a year in the U.P.

“We’re thankful and proud of all that J.R. (Richardson) did for not only the U.P., but for the entire state of Michigan,” said WUP-CAC Chair Phil Wirtanen.

Wirtanen represents and is a resident of the Lake Gogebic area.

Richardson received an applause from the many people attending the meeting.