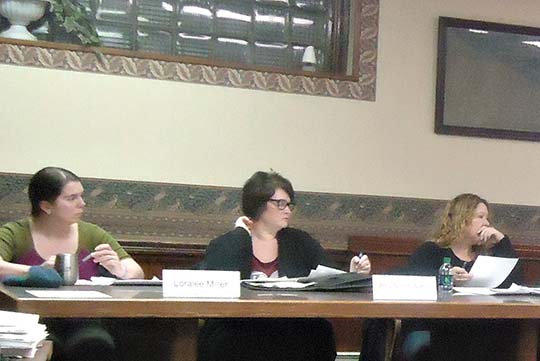 (Jon Jaehnig/For the Gazette) Laurium Village Council members Lauralee Miller (Left), Amy Schneiderhan (Middle), and Christa Carlson (Right) are members of the finance and ordinance committees and are involved in the drafting of next year’s budget and reviewing and updating the village ordinances.

LAURIUM — The Laurium Village Council held its regular meeting for the month of November Tuesday evening. The council discussed a number of matters that will guide the village for the months and years to come. Discussions involved coming up with a budget plan for 2020, reviewing and updating village ordinances, potentially training a future village administrator, and creating a five-year master plan to become a Redevelopment Ready Community.

The budget committee is currently finalizing and reviewing quarterly reports in preparation for drafting next year’s budget.

“Paperwork says we should do it annually, I’d like to do it more than that,” said council member John Sullivan.

Developing a budget will also help the council in other aspects.

“We’re ready to move forward with certifying Laurium. It’s going to be a long process to be sure. The big thing that they’re looking for is to get a five-year master plan developed for what we want,” said Erickson. “I got a copy of Calumet’s (master plan) and we’re reviewing that and using it as a shell.”

Erickson, Sullivan, are also on the Village Ordinance Committee, along with counselor Amy Schneiderhan. The committee is currently in the process of reviewing the village ordinances. During this process, the committee is making sure that the language of the ordinance remains up to date. They are also reformatting the online ordinances to make them easier for community members to use.

“My hope is that the ordinance committee can come up with something for the December meeting,” said Erickson.

Also thinking of the future, Sullivan recommended that the council consider hiring an assistant for Administrator Edward Vertin. Vertin has occupied his current position for years and Sullivan expressed concern that his experience would be lost if he retired without a replacement.

“I would like to think that we should consider hiring an assistant for (Vertin) on a part-time basis,” said Sullivan. “I know there’s money involved, I get that piece, but this is something that we’ve got to consider.”

The council did not express concern regarding the cost of an assistant, but President Donald Bausano said that hiring an assistant in advance of Vertin’s retirement would be unfair to other people interested in the position by giving the assistant an advantage over other applicants.

“I would check in with the Michigan Municipal League,” said Vertin, who had not expressed an interest in retiring in the near future during the course of the meeting.

The Michigan Municipal League is an organization that provides education, resources and advocacy to local governments.

“I do believe that they offer these services and they’ve probably been through this 5,000 times,” he said.