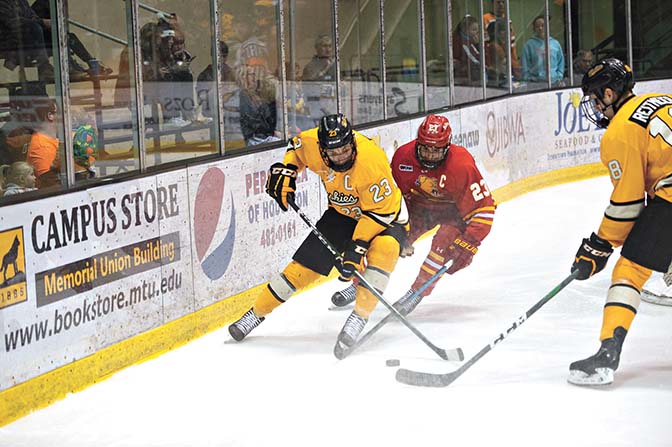 A shot by Calumet’s Tanner Rowe (5) is deflected by an Escanaba defender on Saturday, Jan. 25, 2020, in Calumet, Mich. (Adam Niemi/The Daily Mining Gazette)

HOUGHTON — Ferris State ended a nine-game losing streak with a 2-1 win against Michigan Tech on Saturday.

The loss underscored a lackluster night for the Huskies (14-12-3, 9-8-2 WCHA), whose breakout and passing staggered all night to find a rhythm. The loss punctuated an end to a weekend in which the Huskies needed a pair of wins for a chance at a home series in the postseason WCHA tournament.

“It’s just like any other loss. It stings maybe a little bit more than other losses,” Huskies senior co-captain Alex Smith said. “These are games you have to win if you want home ice. We’ll get back to work and have a good week of practice.”

The slumping Bulldogs made Michigan Tech pay for a lack of aggression early on. Ferris State applied an aggressive forecheck early and leveraged Tech into unforced errors.

Huskies head coach Joe Shawhan lamented a lack of competitiveness by his team after the game. 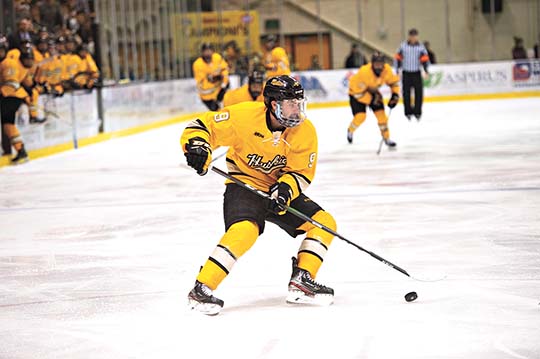 “I thought we tried to steal one at the end of the game. We didn’t compete nearly as hard as we have to compete, especially this time of year,” Shawhan said. “This time of year everything gets tougher. We’re challenged enough to create offense. I didn’t think we competed hard enough for 40 minutes. I would think the players would probably tell you the same thing, that we didn’t, for whatever reason, compete hard enough.”

The Bulldogs (7-18-2, 4-13-2), entered Saturday night without a win since Dec. 14 against Alabama-Huntsville. Needless to say, Saturday’s win was a relief for the team, head coach Bob Daniels said.

“I don’t know that we were overly boisterous. It was more of a relief than it was a celebration,” Daniels said. “It was like OK, job well done, we can do this. We can win games. I think it was, like I said, more of a feeling of relief than it was an accomplishment. The guys know it’s been a long losing streak. You don’t want to celebrate the one win. We would like to take it as OK now we can move in the right direction.”

Hunter Wendt got the Bulldogs on the board five and a half minutes into the game. He took a stretch pass at Tech’s blue line from Zach Yoder in Ferris’ own zone. Wendt got ahead of scrambling Tech defenders and beat goalie Matt Jurusik for the early lead.

“You mentioned our last win — I don’t remember our last lead. I really don’t,” Daniels said. “We’ve fallen behind one, two, our guys always keep coming. (Friday) night we got down two and got it to 2-1. They couldn’t quite get the equalizer. But it was kind of fun for once to play with the other team chasing you instead of always chasing their taillights.”

But Ferris State did not play a perfect game themselves.

The Bulldogs gave Tech a prime opportunity in the second period as Marshall Moise was ejected from the game for a five-minute boarding major 13 minutes into the second.

The crowd buzzed at Michigan Tech’s chance to get back in the game after having not much to cheer about up to that point.

The Huskies were hesitant on the five-minute power-play, passing around the zone and taking too long to shoot. Passes often missed the tape into teammates’ and opposing players’ skates, causing loose pucks along the boards that Ferris State players pinned to chew up the clock.

In other words, the Huskies lacked a mental sharpness and willingness to play a gritty brand of hockey that Shawhan said they needed to follow up Friday’s 2-1 win.

“It’s compete, right? It’s grinding the puck out and managing it up through the ice and not skating one hand on your stick,” Shawhan said. “Being intelligently competitive. That’s really what it is right now. That’s our MO with our group. We play in the GLI a little bit more skill-oriented type skating and less grind. And we’re OK, then you get into a grunty game — which is what every game is going to be like in our league — and we gotta learn to find a way.”

The Huskies played with more ferocity in the third period. They had some high-quality scoring chances.

Alec Broetzman was robbed in the third period by Ferris State goaltender Roni Salmenkangas on a backdoor tap-in. A pass from the top of the right circle came across to Broetzman and Salmenkangas stuck out his right pad and blocker for the save.

“We needed that. I had it in the back of the net and I think the crowd did. It was just an awesome save,” Daniels said. “His calm demeanor in net, he made good saves. He made it look easy even though it wasn’t. Tech had some very good scoring opportunities. That’s the mark of good goaltending because it means positionally he was in the right spot because you’re not having to flail around and dive around.”

Tommy Parrottino tied the game soon after Broetzman’s chance, eight minutes into the period, with his sixth goal of the season. He entered Ferris’ zone on the right wing and snapped a wrist shot that cleanly beat Salmenkangas stick side. Logan Pietila and Trenton Bliss assisted.

Both teams battled fervently for the lead. But the bounces finally went Ferris State’s way. Liam MacDougall crossed up Seamus Donohue and skated in on Jurusik. His shot deflected up and Justin Michaelian swatted the rebound into the net for the go-ahead goal with 3:41 remaining.

The Huskies went into a mad dash for the tying goal, but to no avail.

Jurusik made 22 saves for Tech. Salmenkangas had 29 saves.

Michigan Tech visits Alabama-Huntsville on Friday and Saturday. Both games are at 8:07 p.m. 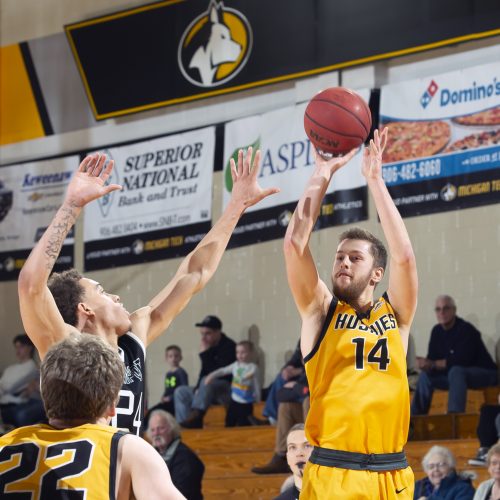 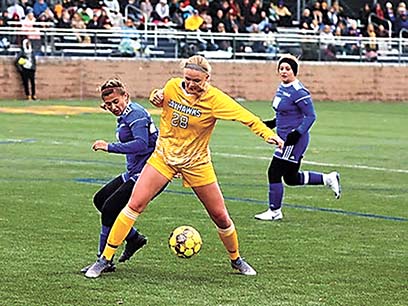