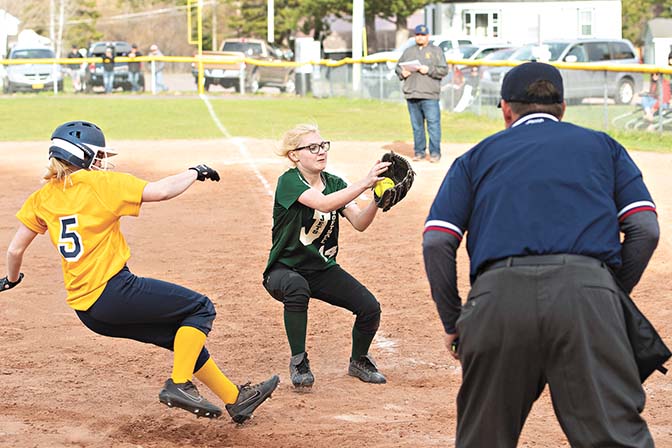 LAKE LINDEN — The Lake Linden-Hubbell Lakes softball team and the Jeffers Jets faced off in Lake Linden on Wednesday. Given the way the spring has gone, it looked like it would be a fairly even doubleheader. However, when the dust settled, the Lakes won both big, 19-6 and 19-4.

The Lakes fell behind early in the opener, but found a way to bounce back quickly. The Jets had capitalized on a slow-moving Lakes outfield to get the early lead.

In the top of the third inning, with Lake Linden at bat, Mckenna Keranen evened the game at 4-4 after a dropped ball.

In the bottom of the fourth, Jets hitters Linna Heinonen and Madi Holombo touched home base to regain the lead, 6-4, for the Jets.

Lakes pitcher Mackenzie Lepage stole home in the top of the fifth to make it a one run game, then Caitlyn Zerbst slammed the ball into the outfield allowing Megan Corrigan to run home, evening the game again at 6-6.

It was not until the top of the sixth inning that the Lakes started to separate themselves. They scored 12 runs in that final inning, with Megan Corrigan hitting one over the fence to end the game.

“It took us awhile to get our bats rolling but once we started hitting, we were hitting good,” said Lake Linden coach Curtis Kinnunen. “(We) were holding up on a pitch and the girls finally (started) making good swings and good contact and good baserunning.”

The Lakes had to face some adversity in the first game before stringing some hits together. Kinnunen saw that as a learning experience for his squad.

“It shows the girls that we were down by a couple of runs, (but) you just keep chugging at it,” he said. “Our sixth inning showed it. We started hitting and (that) kept them fired up. They weren’t very fired up right away, but now they are.”

Jeffers manager Stephanie Sterbernz was happy to see her young team battle, but she still hopes to see things improve as the season continues.

“We’re a very young team,” she said. “We don’t have much playing experience. Just the fact that we stuck with them (for) the first five innings shows that we’re learning and improving every game. We tend to have an inning where we get in a rut. We let the other team score about 10 points.

“Just learning to make the plays and focus on the ball and not get flustered is what we have to work on. As we get more game experience, I think we’ll get better with that.”

The Jets came out strong, batting first in the second game with Linna Heinonen and Holombo scoring two runs to start off the game.

The Lakes answered with seven runs of their own in the bottom of the first inning.

“We continued with our bats and we were hitting the ball good again,” said Kinnunen. “Mackenzie (Lepage) pitched another good two games and our defense stepped up.

“We just have to be more enthused in the first couple of innings and once we’re there, we’re good.”

The Jets would connect for their last two hits of the night by Linna Heinonen and Alia Palosaari, but the Lakes made short work of the inning and scored 11 runs of their own with Lepage hitting a ball into deep left field and over the fence, ending the game.

The Lakes will host the Jets for a second time on Thursday.

“We play here tomorrow (Thursday) against Jeffers,” Kinnunen said. “Yeah, (It’s good) because then you can see how they’re pitching and (we) can prepare for that.”

“We’ve just got to keep practicing situations and keep going over the game rules,” said Sterbenz. “As we play on, the girls will get better and better with more game situations. We’ll play the same place (in) the same time tomorrow (Thursday). They (Lake Linden) have all great players, but we’ll be able to play off and know what to expect, for sure.

“That was a great game. We did our best and we’re going to get better as we go.”