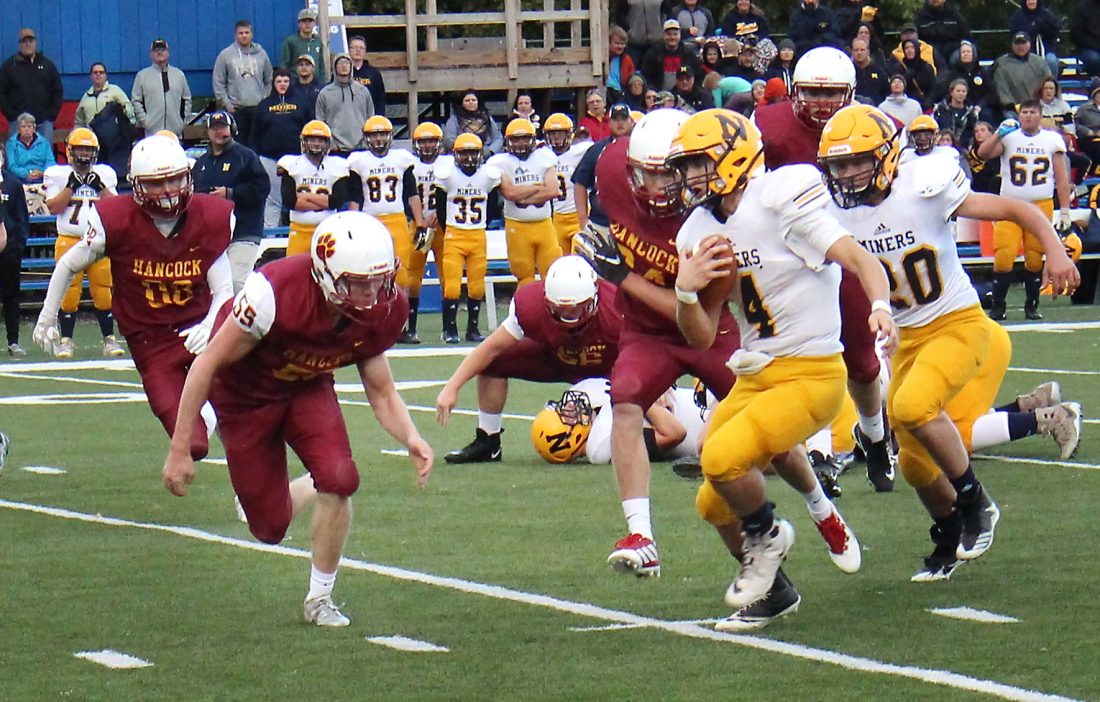 Negaunee’s Jake Sikora looks to get outside several Hancock defenders Friday night at McAfee Field. The Miners notched a 28-19 win over the Bulldogs. (Paul Peterson/For the Gazette)

HANCOCK — After two early losses to begin the football season, the Negaunee Miners were anxious to get on the right side of the win column.

They did so by scoring a 28-19 hard-fought decision Friday night over Hancock at McAfee Field.

NHS coach Paul Jacobson said the outcome was needed badly by his team.

“I thought we had a good ballclub and I still think we do,” Jacobson said. “This was a dangerous Hancock team, but I thought we made some big plays when we had to. Our seniors stepped up.”

Hancock skipper Ramon Sague felt his team played well in spurts in the West PAC Silver Division contest, but pointed to a couple of costly turnovers by his troops.

“The first one led to a touchdown and the last one did the same thing,” he said. “Otherwise, I thought we did played pretty well.”

The Bulldogs allowed the Miners to run at will in the first half, which ended in a 21-13 reading for the invaders.

But they ratchet up the defense and controlled much of the final two quarters.

“That was encouraging to see us control the possessions,” Sague said. “We had to stop their options runs.”

Hancock quarterback Colton Salani did a fine job of throwing the football and directing the offense.

“He (Salani) is a very capable quarterback and we had to keep a close eye on him,” Jacobson said.

A Hancock fumble early in the game was recovered by the Miners at the Hancock 34.

Senior quarterback Jason Waterman did most of the work from there, although tailback Jake Sikora got the score on a 4-yard run. Waterman ran in the two-pointer for an 8-0 reading.

Negaunee upped the score to 14-0 late in the first quarter on a 14-yard run by Sikora.

The Bulldogs got on the board midway through the second frame on a 7-yard pass from Salani to Mason Mikesch. Connor LeClaire booted the PAT to make it 14-7.

The Miners scored again in the second stanza on a short run by Waterman, who also tacked on the two-pointer.

Hancock narrowed the count to 22-13 before the half ended on a short run by Austin Salani.

The Crimson and Gold struck quickly in the third quarter as LeClaire took a handoff on a trick play and went 59 yards down the sideline. for a 22-19 count.

But after holding the Miners on a fourth-and-short in the fourth period, the Bulldogs fumbled at the 2-yard line.

Eric Swanson plunged in from there to make the lead more comfortable.

Hancock tried a short field goal by LaClaire after that, but it slid just right.

Sague liked the effort shown by his team.

“We played hard against a good team,” he said. “If we can play like that the rest of the way, we’ll be okay.”

The Bulldogs go to Gwinn next Friday, while the Miners visit Manistique.

L’Anse running back Jonah Dowd’s 282 yards and two touchdowns on 31 carries were enough to carry the team past the Miners.